Day one on Pickwick Lake is in the Books

Josh Ray brought 19-pounds, 14-ounces to the scales to take the lead on day one of the NPFL event on Pickwick Lake. Taking the gamble and camping on a spot he felt lucky to get on, the afternoon paid off as he was able to scramble enough weight to take the top spot. 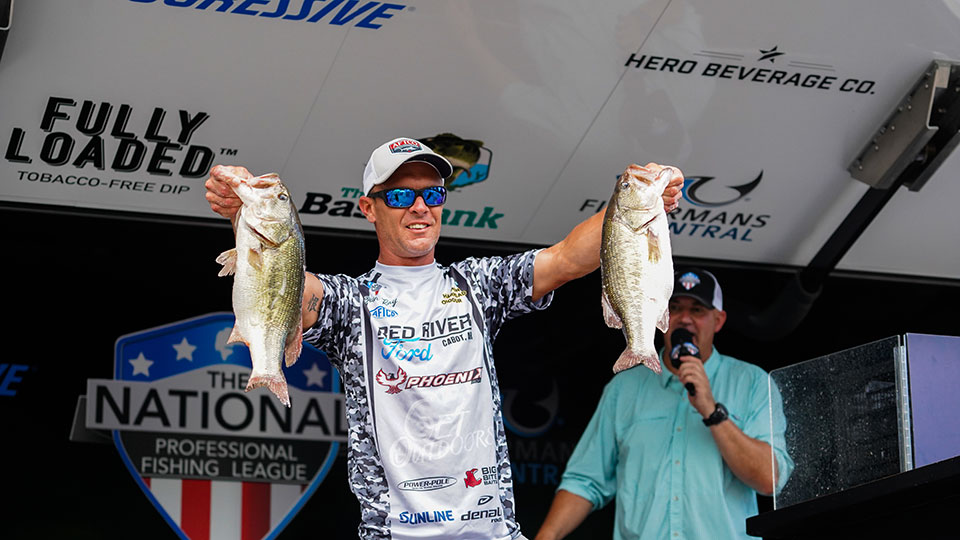 “I fished two spots all day and I sat on one spot for most of the day. I may or may not get back on that school tomorrow but I was the second flight today and I was shocked it was open.”

Starting on another school, Ray milked it for over an hour before making a move. Noting several guys tried to pull in on him, the camera boat was backed off, but other anglers tried to make a move into the area.

“It’s terrible dude, I hate the Tennessee River because of that. I am making a 30-minute run and the bait doesn’t matter really, it’s more about the timing of it all.

The most local angler of them all, Brandon Perkins feels lucky to have the weight he had even though it could have been better. Weighing 19-pounds, 2-ounces, the Counce, Tennessee angler resides in the 2nd place spot 12-ounces behind the leader.

“It worked out today, its better on paper than it actually was. I had so many issues from my livewell, to the live camera microphone. I even caught a decent fish and it had some sort of jig or hard thing in its belly and it was thinking about dying on me. I let it go and had to forfeit a limit at one point.”

Giving up his 5th fish may have hurt, but the Perkins used his knowledge to rotate enough spots and catch fish when it mattered. Culling 2 to 3 times after the live coverage ended, Perking burned 40-gallons of gas and never went more than 15-miles from the take off.

“This morning, I lost a 3.5-pounder right off and man it was stressful. I went to multiple schools that vanished. I spent 20 to 30-minutes trying to relocate them and I never did. I also had a sneaky spot and I went by it first thing and there were three boats side-by-side on that spot, no joke.”

With the run and gun mentality, some days it helps, and some days it hurts. Perkins knows he had the chance to sit on a school all day and hope they fired, but that’s not his game.

“I had two spots open this morning and there is a 20-pound bag on both. I left them and let them go. It’s a question of if they will fire and if so, how long do you wait?”

With 16-pounds, 9-ounces, Buck Mallory hold down the 3rd place spot after day one. The Lawton, Michigan angler rode a 4-pound, 14-ounce kicker to catch his weight for the day.

With 16-pounds on the day, David Gaston survived the first day of competition on Pickwick but is less than thrilled with how his day went. Holding down the 4th spot after day one, Gaston made big moves in the Progressive AOY race and has himself in a good spot going into day two.

“For me, it was way worse than I thought it would be. I lost two 5’s and a 4-pounder. After live coverage, I got three more fish, but man, it was tough today to get a decent bite.

Covering a lot of water, Gaston was fishing around other anglers but was still getting bites when others were not. A full tank of gas burned; Gaston is going to spend some more time this evening mapping out a route for tomorrow.

“I got back and the gas light was on. I burned a whole tank and I was almost out. It’s disappointing because I should have had a big bag but it is what it is. I didn’t fish a single ledge all day, but I was fishing deep still.”

With the shake up in the leaderboard, the Progressive AOY race is heating up. Know it or not, Gaston had a plan and stuck with without the AOY race in mind.

“I worry about each event, and my goal is to fish well enough to get a check. That’s it. I don’t worry about AOY but it would be the cherry on top.”

After catching only three fish in practice, Mike Comeau had no idea what to expect for today’s competition. Bringing 15-pounds, 10-ounces to the scales, the Vermont angler finished the day in 5th place and made work of a sweet spot he found in practice.

“I spent a lot of time idling and was looking for grass. I fished a fair amount but only caught a couple fish. I was not sure how it would go but I had no pressure, just went fishing. I had one stretch and I got there this morning, it all happened fast.”

Knowing it was a timing deal, Comeau does have some places he has saved for tomorrow and is hoping to repeat his success tomorrow with similar weather schedules. A dead fish penalty also cost him a pound off his weight so he actually had over 16-pounds on the day.

“There is nobody around me. I did try to expand on my area after I got my weight, and I even shook a few off. I had that dead fish and culling would have been hard. I have two sneaky areas left to fish, and after a few hours tomorrow on my starting spot, I am going to go exploring some of those areas.”