ST. CLAIR SHORES, Mich. (Sept. 15, 2021) – Dayton, Tennessee pro angler “The Real Deal” Michael Neal has long been considered one of the best pros in the world without a signature professional win. For nine years, Neal has made a name in the pro bass-fishing world with his consistency – always near the top of the leaderboard, but never ON the top. Wednesday, at the Major League Fishing (MLF) Bass Pro Tour CarParts.com Stage Seven at Lake St. Clair Presented by Covercraft in St. Clair Shores, Michigan, Neal finally came out on top. 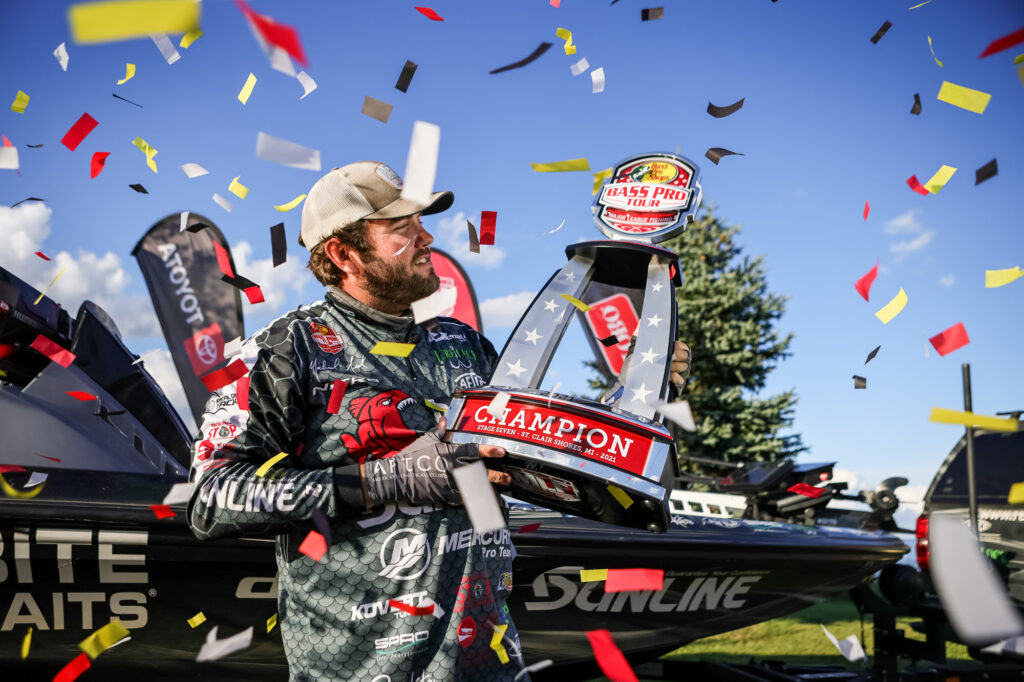 “What a week! I really am not sure what to say at this point,” Neal joked in his post-game interview. “The first win of my career. I won the (Tackle Warehouse Pro Circuit) Angler of the Year title earlier this year, but this is my first actual tournament win and it feels really, really good to get the monkey off of my back. I’ve had so many second-place finishes – I finished second this year at REDCREST. I never would have expected my first win would be with smallmouth. I’ve never been a smallmouth guy – I grew up on the Tennessee River fishing offshore. But, I’ll take it.”

Neal caught his fish this week mainly off of one key area near the mouth of the Detroit River in Lake Erie – a spot that he described as a massive grass flat with some high spots, rock and depressions mixed in. He estimated that the flat was about ¾ of a mile long, and loaded with smallmouth.

“I came here in Day 2 of practice, really because I was just sick of fighting the wind,” Neal said. “I doubled up on a crankbait, then caught one or two more, then left. I really had no idea what this area really held. On Day 1 of the tournament, this was actually my fourth stop. And you can see what was here… it was just crazy.

“I got to catch them on a little bit of everything,” Neal continued. “I caught some on a vibrating jig, a drop-shot rig and a crankbait. The crankbait was by far my number one bait. And they all had Gamakatsu G Finesse treble hooks that were designed by Aaron Martens. Even though he couldn’t be out here with us this week, I want to give a special shoutout to Aaron for designing those hooks. You’re going to lose some fish when you’re fishing smallmouth, no matter what. But I caught the majority of them, and those hooks were key.”

For his accomplishments Neal earned the top prize of $100,000, but most important to him – the giant red Bass Pro Tour winner’s trophy that he now will keep forever.

“It feels so good to finally win. I caught tons and tons of fish, had a great time and broke several records this week,” Neal went on to say. “But records are meant to be broken, and I’m sure someone else will break them the next time we go to another phenomenal smallmouth fishery.

“I’m really looking forward to getting that trophy. I’m way more excited about the trophy than I am the money, at this point. Just to have that – nobody can ever take that away from you. I’ll spend the money, but now I’ve got the trophy to take home and have forever.”

The top 10 pros from the CarParts.com Stage Seven at Lake St. Clair Presented by Covercraft finished:

A complete list of results for the entire field can be found at MajorLeagueFishing.com.

Overall, there were 246 bass weighing 712 pounds, 3 ounces caught by the final 10 pros on Wednesday.

Roumbanis won Wednesday’s $1,000 Berkley Big Bass Award, weighing in a 5-pound, 2-ounce smallmouth that bit his medium-diving crankbait in Period 2. Morgan won the $3,000 Berkley Big Bass award for the largest bass of the event with his 6-pound, 5-ounce largemouth bass that he weighed in on Day 5 in the Knockout Round of competition.

Academy Sports + Outdoors pro Jacob Wheeler of Harrison, Tennessee, clinched the 2021 Bass Pro Tour Angler of the Year (AOY) Tuesday and the $50,000 prize. Wheeler needed to finish 13 spots ahead of Blaine, Tennessee’s Ott DeFoe to clinch the title, and after DeFoe finished the event in 32nd place, Wheeler’s 5th place finish locked up the first career AOY title for the 31-year-old pro.

The CarParts.com Stage Seven at Lake St. Clair Presented by Covercraft featured anglers competing with a 2-pound minimum weight requirement for a bass to be deemed scorable. Minimum weights are determined individually for each competition waters that the Bass Pro Tour visits, based on the productivity, bass population and anticipated average size of fish in each fishery.

The MLF Bass Pro Tour CarParts.com Stage Seven at Lake St. Clair Presented by Covercraft was hosted by Macomb County, St. Clair Shores and the Detroit Sports Commission. The six-day tournament showcased the 80 top professional anglers from around the world competing for a top cash prize of $100,000 to the winner.