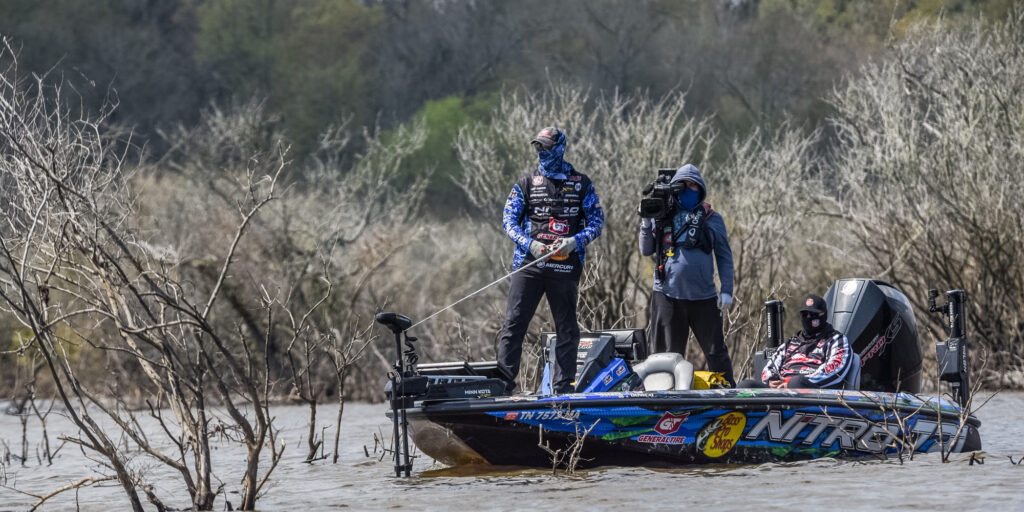 JASPER, Texas (March 23, 2021) – Pro Ott DeFoe of Blaine, Tennessee, caught 14 bass Tuesday totaling 34 pounds, 4 ounces to vault to the top of the leaderboard and win the two-day Qualifying Group A round at the Toro Stage One at Sam Rayburn Reservoir presented by Power-Pole . DeFoe’s two-day total of 25 bass weighing 59 pounds, 11 ounces earned him the win by a 9½-pound margin and now advances him directly into the Championship Round of competition, set for Friday. The six-day tournament is being live-streamed online and filmed for television broadcast on the Discovery Channel and the Outdoor Channel later this year.

The top 20 anglers from Group A will now enjoy an off day, while the 40 anglers in Qualifying Group B will complete their two-day Qualifying Round of competition on Wednesday. The Knockout Round, featuring 38 anglers competing to finish in the top eight, will take place on Thursday. Friday’s Championship Round will feature DeFoe, Wednesday’s Group B winner, and the top eight anglers from the Knockout Round competing in a final-day shootout for the top prize of $100,000.

“It’s such a huge relief to win and not have to come back out here to compete in the Knockout Round,” DeFoe said. “And now, I don’t have to beat my fish up again and the way I’ve been fishing that is a huge, huge plus. I can let those fish rest and don’t have to try to catch them two days in a row. I only have to come back out when it really matters, so I’m very excited about that.”

“What worked for me on Sunday morning worked again for me this morning, and that got me off to a really solid start,” DeFoe said. “The midday deal was a lot harder for me today. I spent a lot of the final period looking and I finally hit a place that was good and caught the three scorable fish really quick in the final period. I might have figured a little something out, and that could be a difference maker for me in the end.”

DeFoe plans to return to the same areas during Friday’s Championship Round and said he hopes it will have enough to earn him his second Texas victory on the Bass Pro Tour in two seasons.

“I’m all in on where I’m at,” DeFoe went on to say. “I’m incredibly excited to get back out there – equally as excited as I was last year for the final day on Lake Athens.”

Other than DeFoe’s 34-pound day, Spring City, Tennessee’s Wesley Strader had the second-highest weight on the day, catching six bass totaling 28 pounds, 15 ounces – including a 8-9 and a 6-1. Strader’s two-day total of 10 bass for 39-5 landed him in fifth place.

“We had a really fun day today,” the Tennessee pro said. “Hopefully things keep improving and we can expand a little bit on what we had going this morning. I’m looking forward to spending tomorrow regrouping and getting retied and everything ready to go for the Knockout Round.”

Although DeFoe’s 9½-pound margin of victory didn’t really lend much dramatics at the top of the leaderboard, the race to finish above the Toro Cut Line inside the top 20 proved very intense. Pro Brett Hite of Phoenix, Arizona, boated a 3-pound, 3-ouncer, with less than 10 minutes remaining in Period 3 to move into the Cut Line and knock out Texan Alton Jones, who finished in 21st place.

“Wow, that was intense. That, right there, is what Major League Fishing is all about – fish hard right to the end and never give up,” Hite said. “I had a rough day, and I worked my butt off. I had a real tough morning, but made the decision to make a long run at the end of the second period into the third period and it ended up being the right call. That’s one of the biggest things out here – you have to go with your gut and trust that you are making the right decision. Today, it paid off, and I’m really looking forward to getting back out here on Thursday.”

The top 20 pros from Qualifying Group A that now advance to Thursday’s Knockout Round on Sam Rayburn Reservoir are:

Full results for the field can be found at MajorLeagueFishing.com.