March 18, 2020 (Lake Athens, Texas) Major League Fishing (MLF) Pro Ott DeFoe charged from behind with 18 catches in the third period to win $100,000 and the Bass Pro Tour General Tire Stage Three presented by TrueTimber Title. After leading for much of the week including the first two periods of today’s Championship Round, Mark Daniels, Jr. fell to third with 39 pounds, two ounces. Alton Jones, Jr. changed his game midway through the second period to finish in second place overall. The MLF Bass Pro Tour is scheduled to continue in Raleigh April 3-8, 2020.

DeFoe began Period Three 19 pounds, eight ounces behind the leader, Mark Daniels, Jr. before coming upon a school and launching to the top of SCORETRACKER®. DeFoe also snuck into today’s Championship Round by catching a four-pound-eight-ounce bass late in the Period 3 of Tuesday’s Knockout Round to finish only one pound, four ounces over the elimination line. The Bass Pro Shops Pro said that he knew if he could get into the Championship, he could make great things happen. 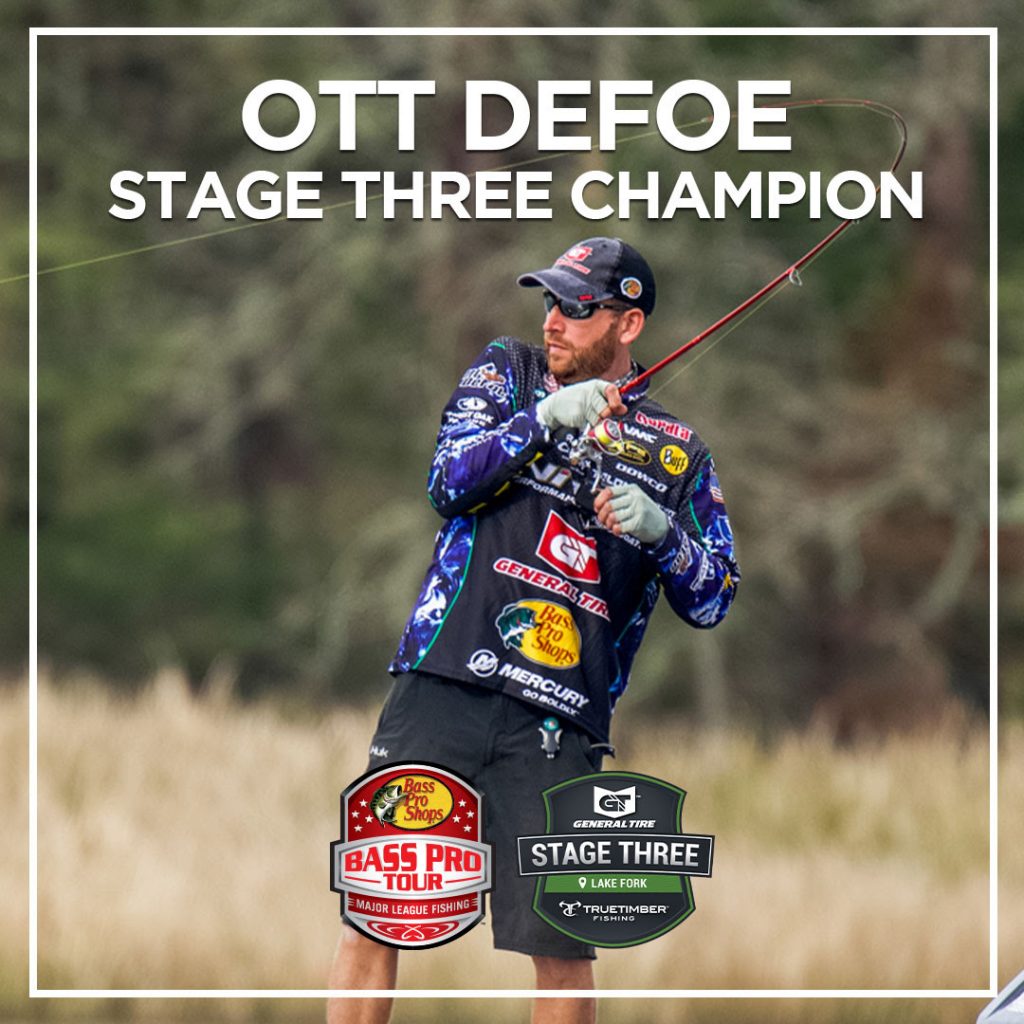 “Yesterday was such a stressful, stressful day and with this format you can’t have a bad day,” DeFoe told MLF commentator Rob Newell after lines-out. “These events are the toughest group of anglers I’ve ever fished against; I couldn’t be more honored to take this trophy home. I wish Jennie and the kids were here to celebrate with me.”

DeFoe, who overcame a medical issue last season that kept him out of Stage Eight, showed fans that he is great physical shape now by catching nine bass in the last 30 minutes alone, including the Berkley Big Bass of the Day weighing nine pounds, six ounces. The 35-year-old father of three is no stranger to tough competition, today’s win, featuring a one-day total of 69 pounds, 12 ounces, brings him to eight major wins in his career and over $2.2 million in winnings.

Despite a slow start across the field on Lake Athens, Daniels secured a solid lead early in the first period, which he held onto until DeFoe caught a 4-14 with less than 30 minutes to go in the day. Daniels ended the day with 39 pounds, two ounces on 13 scoreable bass, which earned him third place and $24,000. The Bill Lewis Pro dominated much of this week’s tournament by catching 111 pounds, 15 ounces on Lake Fork to win Group A and the automatic berth into today’s Championship Round.

“It’s been one heck of a week,” said Daniels. “I had over 111 pounds to win (Group A) and then I led the tournament all day long before Ott got fired up in a school just demolished them. Hats off to Ott! That’s how this game goes, but I believe my time is coming.”

Mystil Lubricants Pro, Alton Jones, Jr., caught a 20-pound run in Period 3 overtaking Daniels for second place with a three-pound-14-ounce bass three minutes before the buzzer. Jones, who caught seven of his 13 fish for the day in the third period, finished with 41 pounds, nine ounces. This is the best finish on the Bass Pro Tour for the 27-year-old Texan.

“I had such a struggle in the first couple periods,” reflected Jones after lines-out. “Mark (Daniels) had gotten such a lead that I had to make a change. Then I found some good (fishing) holes, but I didn’t find an Ott-DeFoe-magic hole.”

The General Tire Stage Three presented by TrueTimber Championship Round finished as follows:

The Bass Pro Tour continues April 3-8, 2020 with the Berkley Stage Four presented by Covercraft in Raleigh, N.C.  In response to COVID-19, Major League Fishing has cancelled all public gatherings associated with their tournaments per recommendations from Public Health and medical professionals.

The Bass Pro Tour began in 2019 and features 80 of the best professional anglers in the world, including Kevin VanDam, Edwin Evers, Aaron Martens, Mike Iaconelli, Jordan Lee, and Skeet Reese. Each stage includes six days of competition using the Major League Fishing, catch-weigh-and-immediately-release format, where every bass over a variable minimum weight, which is two pounds on Lake Eufaula for Stage One, toward a cumulative weight total for the day.  Variable minimum weights are determined by fishery akin to a golf course handicap. The field of 80 anglers is divided into two groups (Group A and B) of 40 to compete in the Qualifying Round where a two-day cumulative weight total determines the winners. The winners of Groups A and B receive automatic berths to the Championship Round and the anglers finishing in places 2-19 (38 total) advance to the Knockout Round on day five. The top eight from the Knockout Round join the winners in Groups A and B (field of 10) to compete in the Championship Round and a shot at the $100,000 top prize and Stage Title.