BRANSON, Mo. (June 4, 2019) – Watching the weights on SCORETRACKER® during the Knockout Round for the Major League Fishing® (MLF) Bass Pro Tour Bad Boy Mowers Stage Seven Presented by Covercraft – and trying to predict who would be in the Top 10 when time ran out – was like the local meteorologist trying to predict the next storm around Table Rock Lake. 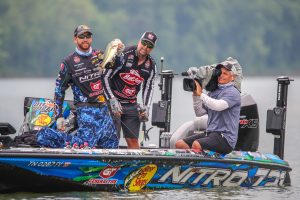 MLF pro Ott DeFoe (left) shows one of his 51 scorable bass caught in today’s Knockout Round competition, before immediately releasing it back into the water after being weighed. DeFoe finished atop the 10 anglers who qualified for Wednesday’s Championship Round. But his and all scores are zeroed for the Championship Round, which will return to a morning start time of 7 a.m. CT and ends at 3 p.m.
It was nearly impossible.
Once again, there was a lightning-related weather delay, but it was short-lived, and the anglers only lost a few minutes of fishing time. The scheduled Knockout Round hours were noon – 8 p.m. CT, as they have been throughout each of the first five days of competition this week.
DeFoe On Top
It has become pretty common to see Ott DeFoe leading after a round, and he did so with a catch of 83 pounds, 8 ounces on 51 fish today. He did much of his damage with a crankbait and caught several quality fish, including a 3-13.
Tomorrow’s starting time has been adjusted to a 7 a.m. to 3 p.m. schedule to avoid another delay, and things could change in terms of how the anglers catch their fish.
“I was able to hold off Kevin (VanDam) there at the end and have some good momentum going into tomorrow,” DeFoe said. “I need to hurry and get back to bed since we’re starting in the morning.”
Defoe finished Stage Six in 8th place, and it seems like he has Table Rock dialed in this time of year as only he and Jacob Wheeler are repeat Championship Round qualifiers.
VanDam Starts and Finishes Strong
Kevin VanDam had a solid morning bite going and quickly took the lead before falling back a few spots. He stayed in the Top 10 all day and resumed his place near the top in Period 3 as he tallied a total of 81-14 on 46 fish today.
Wiggins and Meyer Rally
Jesse Wiggins was in 37th place as Period 1 came to a close, but the Alabama pro executed such a strong turnaround that he briefly held the lead at one point in Period 3. His miraculous jump included catching several quality fish in a row with around one hour to go.
Cody Meyer made a similar move. With an hour to go, Meyer was not even in the Top 20. With 30 minutes left, he was in 11th, and he finished the day in 4th with 49 bass for 78 pounds, 7 ounces. In total, he caught 26 bass in the final hour.
“This all happened on one point with a Strike King Sexy Dawg topwater,” Meyer said. “Times like this remind me why I do this for a living, it was so much fun.”
Avena Squeaks In
At 7:52 p.m. Adrian Avena was in 11th place but a 1-15 and then a 1-10 at 7:56 p.m. allowed him to sneak inside the cut.
“I flirted with the cutline all day, but the good thing is once you make it in, anything can happen since the weights zero. It doesn’t matter if you are 1st or 10th today as long as you get in,” said Avena.
Shin Falls Short
The last-minute catch by Avena pushed Shin Fukae into 11th, but he took the news in stride.
“The ‘Jersey Boy’ got me, but I enjoyed fishing today. It was exciting,” he said on MLF NOW!
Daily Winners
Knockout Round daily awards were:
* The Berkley Big Bass of the day was Russ Lane’s 5-4 largemouth
* Dustin Connell won the day’s Berkley Catch Count award with 58 bass
* DeFoe’s 83-08 earned him the Phoenix Boats Daily Leader award
10 In Championship Round Back to Morning Start
The 10 anglers advancing to the Championship Round are DeFoe, VanDam, Wiggins, Meyer, Connell, Scott Suggs, Fred Roumbanis, Wheeler, Brandon Palaniuk and Avena. It begins at 7 a.m. CT and ends at 3 p.m. Live, official scoring is available from lines in to lines out via SCORETRACKER on MajorLeagueFishing.com and on the MLF app.
Where, How & When to Watch
The MLF NOW! live stream begins with the First Cast show at 6:55 a.m. CT, featuring coverage of Period 1, with Steven “Lurch” Scott and Rob Newell calling the live action. Full coverage continues at 9:30 a.m., when Chad McKee, JT Kenney, Marty Stone, and Natalie Dillon pick up the commentary and analysis until lines out at 3 p.m. The Berkley Postgame show begins at 4:30 p.m.
Knockout Round Final Standings
To see where all 40 anglers finished in the Knockout Round, visit MajorLeagueFishing.com and click “Results,” and then select “Knockout Round.”
###
About Major League Fishing