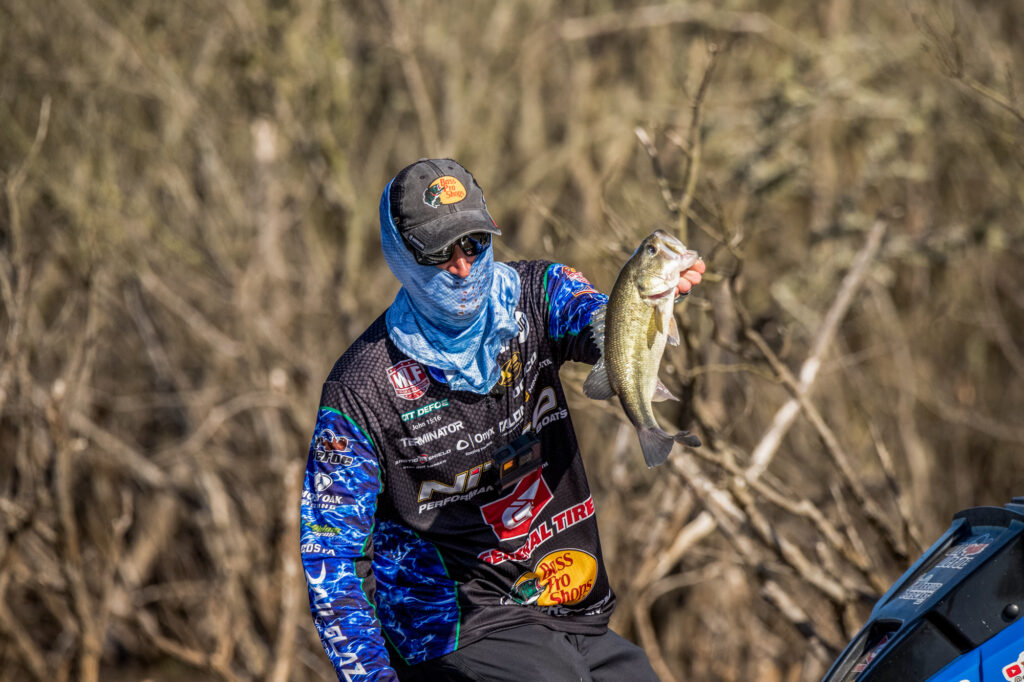 The ending was crazy because of the area that DeFoe had been fishing in – a secluded spot way up the Angelina River on the north end of Sam Rayburn. Cellular coverage was extremely spotty, so when Defoe boated a back-to-back 2-12 and a 2-13 with about 20 minutes left in the event to overtake Clausen, it didn’t register on the SCORETRACKER leaderboard until very near the end of competition. His first bass – the 2-12 – tied him with Clausen, and the 2-13 earned him the victory by that margin.

“I just love fishing this time of year,” said DeFoe, who earned his second career Bass Pro Tour victory – both in Texas. “The end of the day was a bit of disaster due to the area that I was in… the service was bad, but the fishing was really good.”

DeFoe said that he found his area on the first day of practice and committed to fishing it for the entire event.

“The very first day of practice I spent up there and got a fair number of bites, and I liked what I saw,” DeFoe said. “I spent the second day of practice down the lake and saw how much boat traffic there was, and there wasn’t much traffic up on the north end, so that is where I committed to. I ended up fishing there every single day.

“I had one really key little spot that there were so many bass in, and really just going through a rotation of baits is what worked for me this week,” DeFoe continued. “My key baits were a squarebill crankbait; I caught some fish on a Rapala DT4, another homemade squarebill crankbait that will eventually be in the OG line from Rapala, a Bass Pro Magnum Fin-Eke Worm ended up being a big player for me, and a Bass Pro Wacky Stik worm was also a big deal.

“I give all of the thanks to God – he gets all of the credit for everything,” DeFoe went on to say. “I just love this time of year – the Easter season is upon us and I am so excited for next week. This week has been incredible, though, and I just can’t believe it. All I can say is God Bless Texas!”

Clausen lost an estimated 5- or 6-pounder in Period 1 that ended up being the difference maker for him.

“I’ll be thinking about the one that I lost for a long time,” Clausen said. “I knew today when it happened, that fish, if I didn’t win it was going to hurt me pretty dang bad. And it did.

“I really don’t know that I could have done anything different today, other than land that fish,” Clausen continued. “I didn’t have a lot figured out, and I knew it was going to be one of those kind of deals where I knew it was just going to be about me going fishing. I could catch them on a ChatterBait and on a stickbait, and other than that it was just grinding it out. I did what I thought I needed to do at the right times and got some of the right bites, but obviously it was not enough.”

The top 10 pros at the Bass Pro Tour Toro Stage One at Sam Rayburn Reservoir finished:

There were 63 bass weighing 174 pounds, 7 ounces caught by the final 10 pros Friday.

Clausen won Friday’s $1,000 Berkley Big Bass Award, weighing in a 5-pound, 3-ounce largemouth that bit his wacky-rigged worm just 20 minutes into Period 3. Connell won the $3,000 Berkley Big Bass award for the largest bass of the event with his 9-pound, 5-ounce bass that he weighed in on Day 1 of competition.

Television coverage of the Bass Pro Tour Toro Stage One at Sam Rayburn Reservoir presented by Power-Pole will be showcased across two two-hour episodes, premiering at 7 a.m. ET, Aug. 28 on the Discovery Channel. New MLF episodes premiere each Saturday morning on the Discovery Channel, with additional re-airings on the Outdoor Channel and the Sportsman Channel. Each two-hour long reality-based episode goes in-depth to break down each day of competition.

The MLF Bass Pro Tour Toro Stage One at Sam Rayburn Reservoir Presented by Power-Pole was hosted by the Jasper County Development District and the Jasper/Lake Sam Rayburn Chamber of Commerce.

The 2021 Bass Pro Tour features a field of 76 of the top professional anglers in the world – joined at each event by 4 pros that qualify from the Tackle Warehouse Pro Circuit – competing across seven regular-season tournaments around the country, competing for millions of dollars and valuable points to qualify for the annual Heavy Hitters all-star event and the REDCREST 2022 championship. The next event for Bass Pro Tour anglers will be the 2021 General Tire Heavy Hitters Event, held April 9-14 at Falls Lake, Jordan Lake & Shearon Harris Reservoir in Raleigh, North Carolina.