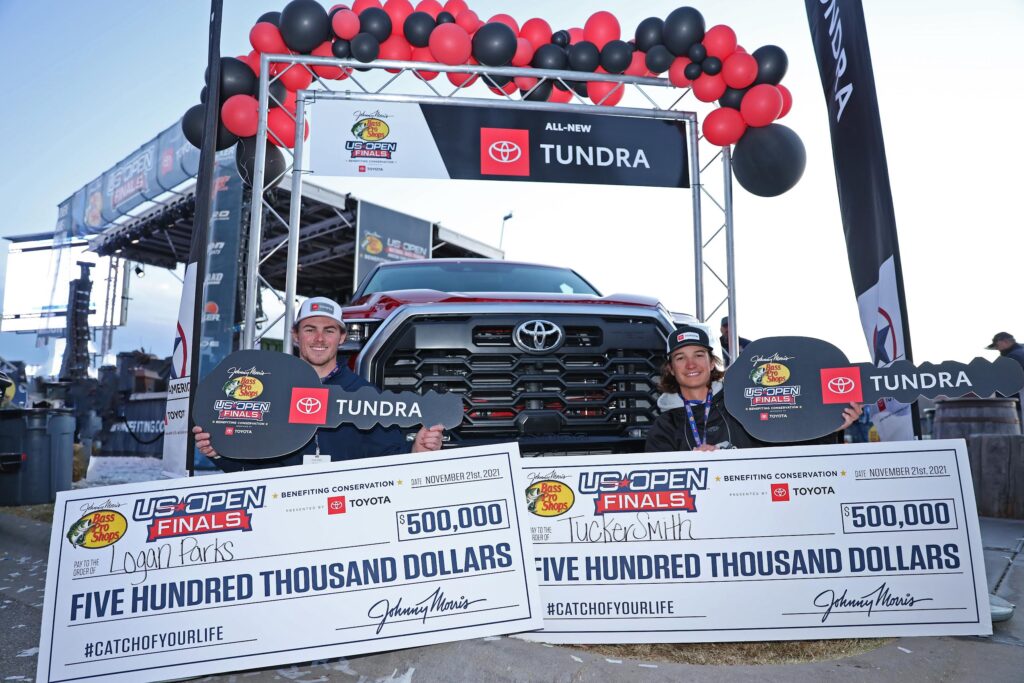 “This is the greatest day of my life,” said Parks on stage as his tear ducts flooded while standing near angling icons Kevin VanDam, Roland Martin, and Jimmy Houston.

“I just want to thank my Lord and Savior, Jesus Christ, because Tucker and I have prayed the same prayer all year before tournament blast-off each morning, and today, He answered in a big way!” he added.

Success on the water is hardly new to these two Alabama natives. In fact, Parks, age 23, and Smith, age 20, recently achieved “Carhartt Bassmaster College Series Team of the Year” honors with B.A.S.S..

Smith said a 3/8-ounce Damiki rig tied to 12-pound line was the winning lure, and that most of the bites occurred about 20-feet beneath the surface over 100-feet of water.

“Bass Pro Shops and Toyota have long enjoyed a great partnership, and much of the reason why is because both companies are committed to conservation,” said Bob Carter, Executive Vice President, Toyota North America.

Indeed, it was an event like bass fishing has never seen this past weekend in the Ozark Mountains — thanks to Johnny Morris and his sponsor partners such as Toyota.

More than a million bucks was donated for bass fishing habitat restoration, and a million more in top prize money was won by two young talented anglers whose lives are forever changed in a manner they had only previously prayed about.