HUNTERSVILLE, N.C. (Oct. 3, 2020) – Pro Troy Morrow of Eastanollee, Georgia, brought a five-bass limit to the scale Saturday weighing 9 pounds, 7 ounces to win the three-day Toyota Series at Lake Norman event in Huntersville, North Carolina. Morrow’s three-day total of 15 bass weighing 32-3 earned him the win by a 4-ounce margin over second-place angler Todd Walters of Kernersville, North Carolina, and earned Morrow the top payout of $24,795 in the third and final tournament of the 2020 Toyota Series Eastern Division. 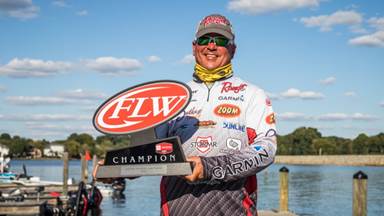 Morrow spent his practice graphing, humps, shoals and the deepest docks he could find. In all, he marked about 200 places that looked good. Each day during the tournament, Morrow hit between 30 and 40 places he had marked from practice and he rarely repeated water.

“In the old days I might only fish about 15 or 20 places per day, because I felt like I had to fish so slow and thoroughly,” Morrow said. “But with LiveScope I’m much more efficient. I can fish double the number of spots because if they’re not there, spooky, or not acting right, I just move on. Like, one thing I noticed immediately is if I caught a fish, a lot of the times the rest of the fish would leave. Knowing that kept me from wasting time on unproductive water.”

Morrow’s primary lure all week was a shaky head with a Zoom Finesse Worm on a 3-16-ounce Gambler Giggy Head instead of a drop-shot.

In addition to the shaky head, Morrow also threw a 5/8-ounce Southern Hook Southern Spin underspin with a Zoom Boot Tail Fluke to single rocks and stumps as deep as 30 feet. A Carolina rig also claimed a couple of weigh fish as well.

Morrow’s win at Norman marks his fifth FLW win. He has also won two Phoenix Bass Fishing League Regional Championships and the All-American. But this is his first Toyota Series trophy.

“This feels good,” Morrow went on to say. “To come here and do my thing against these guys and win feels good. I’ve won at the BFL level several times but a win at this level has been a long time coming.”

Pike took home an extra $1,000 as the highest finishing FLW PHOENIX BONUS member. Boaters are eligible to win up to an extra $35,000 per event in each Toyota Series tournament if all requirements are met. More information on the FLW PHOENIX BONUS contingency program can be found at PhoenixBassBoats.com.

The 2020 Toyota Series consists of eight divisions – Central, Eastern, Northern, Plains, Southeastern, Southern, Southwestern and Western – each holding three regular-season events, along with the International division. Anglers who fish all three qualifiers in any of the eight divisions and finish in the top 25 will qualify for the no-entry-fee Toyota Series Championship for a shot at winning $235,000 cash, including a $35,000 FLW PHOENIX Bonus for qualified anglers. The winning co-angler at the championship earns a new Phoenix 518 Pro bass boat with a 115-horsepower outboard. The 2020 Toyota Series Championship will be held Dec. 3-5 on Lake Cumberland in Burnside, Kentucky, and is hosted by the Somerset Tourist & Convention Commission and the Burnside Tourism Commission.