Dakota Ebare might not be a household name in the professional bass fishing world yet but if his incredible season in 2022 is any indication, he’s well on his way. The Bass Pro Tour rookie took on a grueling schedule fishing both the Tackle Warehouse Pro Circuits and the BPT, then added in a few Toyota Series events along the way. Through his marathon of a line up, Ebare emerged as one of the hottest bass anglers in the world right now. 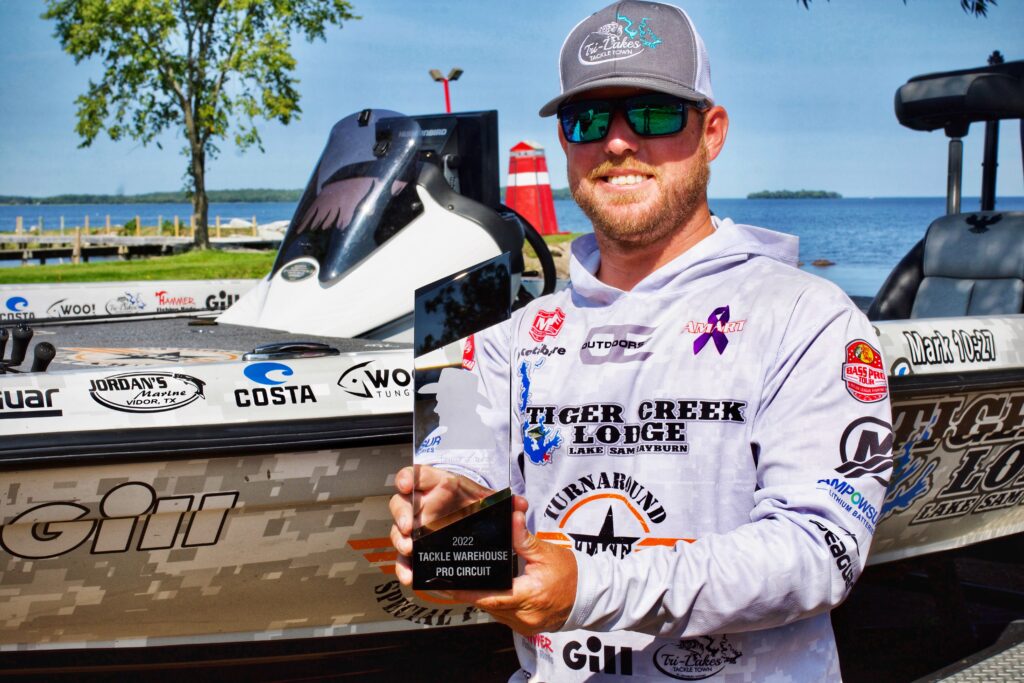 The Strike King pro accumulated seven top 10s coming into Bally Bet Stage Seven on Mille Lacs Lake, including three second place efforts and will round out his season with top 10 finishes in the point standings of both the Pro Circuit and the BPT.

A glance at the fisheries where he had top performances will leave you even more impressed. A second place near home in Stage Two on Lake Fork, 3rd on a fickle Watts Bar against the Bass Pro Tour pirates, then another second on the James River on the Pro Circuit followed by a close runner-up finish for the TITLE Championship on the St. Lawrence River.

The former college fishermen prides himself on his versatility and proved he can catch ‘em coast-to-coast. Whether he’s flipping for shallow water largemouth like he grew up doing in Louisiana or targeting suspended smallmouth with forward facing sonar. While the competitive fire burns hot within him for his first national win, Ebare’s perspective on his season is rock solid.

“As a competitor it’s frustrating to be so close so many times but the reality is this year has been a huge blessing,” Ebare said. “Second isn’t good enough in my mind, but it’s positive motivation, not something to hang my head about. I trust in God’s plan and when it’s meant to be, it’ll be my time.”

While he may not have hoisted a first-place trophy Ebare did win several awards throughout the 2022 season, including numerous Costa Compete + Conserve bonuses. Ebare has worn Costa Sunglasses throughout his career and has taken full advantage of the popular new contingency program offered from Costa.

Compete + Conserve supports over 300 bass tournaments and Ebare took home rewards in Bass Pro Tour, Pro Circuit, and Toyota series events with angler payouts ranging from $1,000 to $3,000 for each, just for being the highest finisher wearing Costa shades.

The program is absolutely free to register for and sanctions BFLs, team trails, college, and high school tournaments, too. Perhaps the coolest part of Compete + Conserve is the conservation donation included with every angler payout, something Ebare is super proud of.

“I’ve been able to make several thousand dollars through Compete + Conserve which is great, but my wins also resulted in $2,000 donated to freshwater conservation efforts,” Ebare proudly explained. “I want the sport of bass fishing to thrive. To do that, we (bass anglers) need to lead the charge for improving our fisheries. Costa has always supported conservation and the included donation within Compete + Conserve is a great way to keep it top of mind for tournament anglers.”

Ebare’s infectious positive attitude and emphasis on wanting to give back to the fishing community says a lot about the 30-year-old Texan. His personality and the way he carries himself is what led to Ebare being awarded the Pro Circuit’s Forest L Wood Sportsmanship & Community Leadership Award a few weeks ago. Out of all the accolades from this year, this award was without a doubt Ebare’s high point.

“It’s the highlight of my entire career up until this point honestly,” Ebare said. “This is an angler-nominated decoration, so it was voted on by my peers… that means a lot. I just try to promote the sport in a positive way in everything that I do. This award means other people have noticed, which means the world to me. Have a good attitude, treat people right, and do your best every day. That’s what it’s all about.”