RICHMOND, Va. — Bassmaster Elite Series angler Kenta Kimura said earlier in the week that he did not know what he was doing on the James River. But now that he’s won the St. Croix Bassmaster Northern Open at James River presented by Mossy Oak Fishing with a three-day total of 65 pounds, his story seems less than convincing. 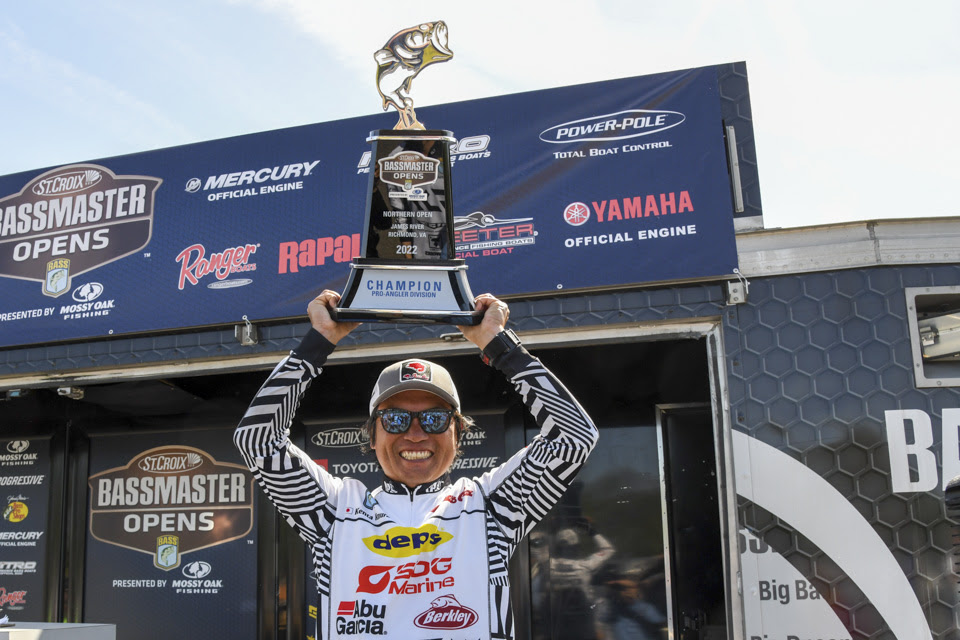 After a Day 1 limit of 17 pounds put him in 19th place, the pro from Osaka, Japan, added 23-5 a day later and surged into second. Finishing Championship Saturday with 24-11 — the event’s second-heaviest bag — Kimura edged Keith Poche of Pike Road, Ala., by a margin of 3-9.

Kimura, who was fishing the James River for the first time, earned the top prize of $52,500, along with the $500 Garmin contingency bonus for being the top finishing pro using Garmin products. He also earned a berth in the 2023 Academy Sports + Outdoors Bassmaster Classic presented by Huk, to be held in Knoxville, Tenn., March 24-26.

“I really didn’t expect this because I had a horrible practice,” Kimura said. “I was going to be happy with 14 pounds a day, but I figured some things out.

“Some guys said it was going to take 18 pounds a day to make the cut, but I said, ‘No way.’ But this river is full of big fish. This might be the best river I’ve ever been to in the whole world. I love the James River.”

Complicating his first trip to the James River, Kimura left last week’s Elite event on Chickamauga Lake with little time to practice. But what he brought played a key role in his win.

He caught several of his bass this week on the same DRT Tiny Klash swimbait he used to catch his 19-pound Day 2 bag on Chickamauga. The jointed swimbait with a lateral tail and adjustable ABS plastic bill produced a 6-pounder in the tournament’s waning minutes.

“I culled out a 2-pounder with that fish,” Kimura said. “Without that fish, I wouldn’t have won.”

Kimura also caught bass on a spinnerbait and a Deps Evoke 2.0 squarebill. Those baits produced some of his limit fish, but his other big fish bait was a 3/8-ounce buzzbait. Kimura added a Berkley creature bait trailer and removed the side appendages for a more streamlined look.

“Anywhere in the world, the bigger fish like buzzbaits in a river,” he said. “Especially this place; all the fish are pressured.”

Kimura said he overcame his lack of James River experience with time management. He spent about half of his practice in the popular Chickahominy River — a major downstream tributary — but couldn’t put together what he considered a winning plan.

Ultimately, Kimura did all of his damage within 5 miles of the takeoff site at Osborne Park & Boat Landing. He said one of his spots was 30 seconds away.

“Every time I’ve fished rivers, I make a long run, but I stayed closer to give me time to figure out what tide they liked,” he said. “The first day I was just running around a lot of different places and caught all of my fish on the buzzbait. I had a good day, but it was only 19th place.

“The second day, I caught a limit pretty easy on the squarebill and the spinnerbait, but I couldn’t get a big one, so I switched to the big swimbait. They really liked the bigger profile.”

Kimura concluded with a show of respect for his U.S. competitors: “I want to thank the American anglers. You guys have created a great sport. This is my dream. It’s what I’ve wanted to do all my life since I was a little kid.”

Fishing out of a 17 1/2-foot Gator Trax aluminum boat with a 90-horsepower Mercury outboard and a low-water pickup, Poche committed to fishing shallow tributaries, where he targeted spawning and prespawn bass with a Texas-rigged Berkley PowerBait The General and a Berkley Warpig lipless bait.

“It really slacked off (on Day 2) and I was really able to see those beds right off the bank,” Poche said. “The first day it was windy and today it was windy, so it was a little bit tougher.

“I was throwing that General weightless on a 7-3 heavy Fenwick rod and it was just really tough today to pinpoint those spots. This was my first time here and this river really showed out; I’d definitely like to come back.”

Soukup spent his time targeting bed fish with a War Eagle Jiu-Jigsu Jig and a Yum Craw Chunk trailer and prespawners with a 3/8-ounce Booyah Covert spinnerbait. Day 3 ended with a difference-maker.

“The next thing I know, it’s under the boat digging and now I think I have a catfish and I’m just trying to rip this thing up. All of a sudden, this thing comes up and it’s this giant bass — a 6-4. That was just a gift. God blessed me on that one.”

Joey Murphy of Elkton, Md., won the $750 Phoenix Boats Big Bass award with his 7-11 largemouth that he caught on Day 1.

Kimura leads the Bassmaster Northern Opens Angler of the Year season standings with 200 points. Poche is second with 199, followed by Soukup with 198, Alex Wetherell of Middletown, Conn., with 197 and Bassmaster Elite angler Koby Kreiger of Alva, Fla., with 196.