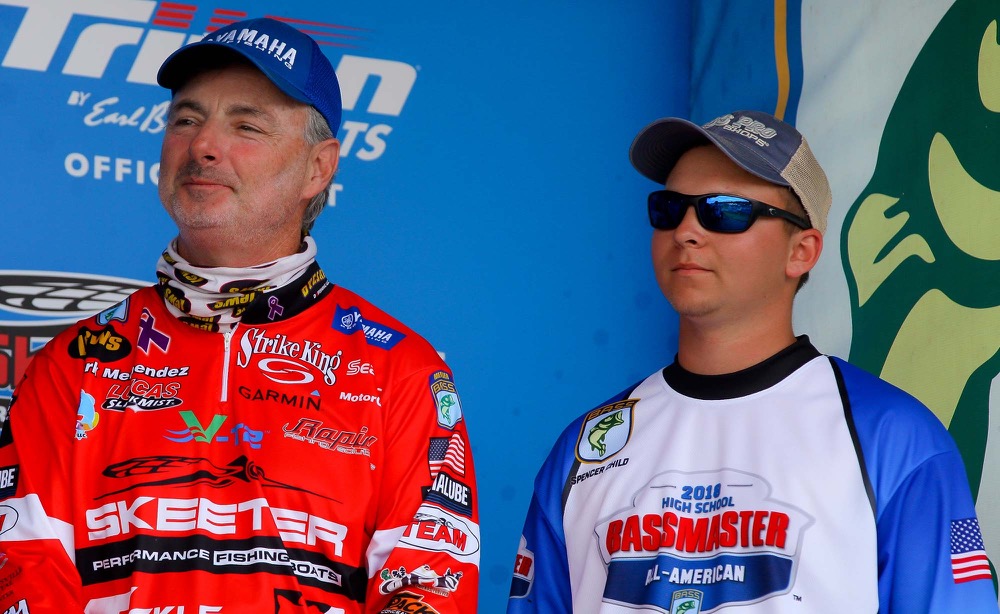 JONESTOWN, Texas — Spencer Childers caught the most weight in the Bassmaster High School All-American Bass Tournament, and his real prize was getting to fish with Bassmaster Elite Series pro Mark Menendez.

Childers, a senior at Pickens High School in Jasper, Ga., was among the 12 standout high school anglers selected as members of the exclusive Bassmaster High School All-American Fishing Team presented by DICK’S Sporting Goods. Elite Series anglers served as teammates and “coaches” of the student anglers in the tournament.

The anglers fished Inks Lake, a picturesque 768-acre reservoir on the Colorado River in the Texas Hill Country. The Texas Parks and Wildlife Department waived fishing license requirements for the anglers and entrance fees into the launch site at Inks Lake State Park.

“Fishing with Mark was a great experience,” said Childers, who is 18 years old. “Before today, my dock fishing and flipping skills weren’t as good, and now they are much better.”

Menendez was among 28 Elite Series pros volunteering for the event should they not have made the top 50 cut on Saturday at the Toyota Bassmaster Texas Fest benefiting Texas Parks and Wildlife Department.

“Those kids are the next generation, the future of our sport,” said Menendez. “I have done this for so long that I wanted to be around them, remind me about what fishing truly is all about.”

Each pro and high school angler weighed one bass apiece. Childers’ catch weighed 3 pounds, 12 ounces, and the fish caught by Menendez tipped the scales at 6 pounds. The combined 9 pounds, 12 ounces ranked as the heaviest weight of the week. The anglers weighed their catches on the same stage used for the Toyota Bassmaster Texas Fest Benefiting Texas Parks and Wildlife Department.

“He called the shots and took the lead, and it was a great day with a fine angler,” added Menendez.

Following are heaviest weights by weight for the top anglers. Randy Howell and Ethan King caught a combined weight of 9-9. Alton Jones and Jacob Woods caught the third heaviest weight of 8-9. Next came Brock Mosley and Samuel Vandagriff with 7-9, followed by Alton Jones Jr. and Dalton Smith with 5 pounds.

More than 465 applications from students in grades 10-12 were submitted from 38 states across the nation. Of those, 64 were chosen as Bassmaster All-State anglers. After reviewing tournament résumés, community service activities and recommendations from coaches and school officials, a panel of judges further narrowed the field to the Top 12 high school anglers in the country.

Childers earned five wins in high school tournaments, including the B.A.S.S. Nation Georgia State Championship and Bass High School tournament. He also has three Top 5 finishes to his credit, each with 100-plus-boat fields.

In addition to his tournament success, Childers is a volunteer at the Pickens County Fishing Rodeo, an event in which children and adults with disabilities get the opportunity to fish in a stocked stream. Childers spent the day baiting hooks and helping members of the community experience the joy of catching fish. He is also a volunteer with his high school’s Special Olympics program.

“One of the things that makes Spencer stick out from most high school kids is his ability to lead,” wrote Bo Page, bass fishing coach at Pickens High School. “His leadership in the classroom is a rare and welcomed sight to his teachers. Spencer has never missed a meeting; he’s never missed a tournament; and most importantly, he’s never missed a chance to give back to our school and community.”

On tournament eve, a banquet was held for the High School All-Americans. Each received special All-American jerseys from B.A.S.S. and a prize package valued at over $400. Abu Garcia, Mercury, Skeeter Boats, Toyota and Yamaha Outboard provided the gifts.