Taking the inaugural NPFL event wire-to-wire, John Soukup took the lead day 1 with 20-pounds, 12-ounces and never looked back. He followed up that haul with a 20-pounds, 2-ounce limit on day 2 and even with the toughest day of the week coming on the final day, Soukup got it done. 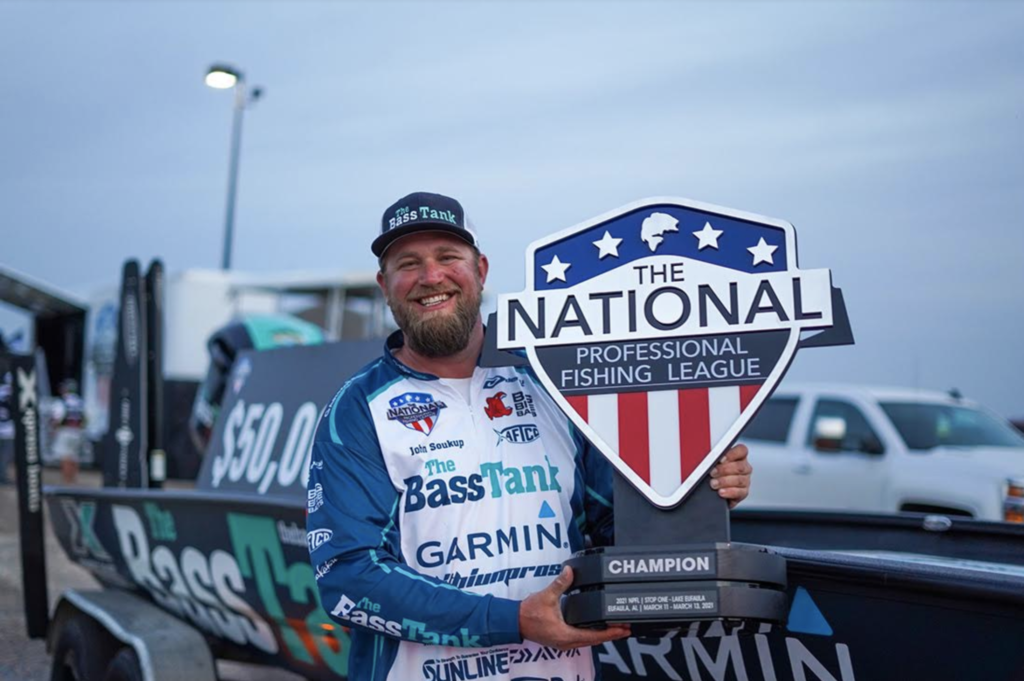 Soukup spent his week looking at fish on his Garmin Livescope installed by the Bass Tank. Quality equipment and a solid game plan were key to his week. He ran the Xpress boat quietly in and out of shallow areas with brush that were holding big bass.

“One little tree gave me 20-pounds on day 1, but today was super tough. I lost a “helper” off a dock that was around 2.5-pounds. At one point, I had a small limit in the 6-pound range. I kept working that jerkbait and I would rotate to a spinning rod when I needed.”

Not only was a spinning rod part of his plan, his two biggest bass came on it. Soukup began his final day dealing with local pressure and stingy fish, catching 1-pound bass one after another. A 5-pounder later in the day helped put him over the top, but the fish didn’t come easy.

“That big one today, I had to hover it over the brush pile and work it through there. I watched it come up and finally ate it. Today some followed it for like 40-feet and wouldn’t bite it. The small ones would come up and crush it instantly.”

The Oklahoma pro rotated through a series of jerkbaits, all thrown on Denali Rods and Daiwa Reels. His spinning rods were spooled with 7-pound Sunline. Each day the fish positioned and reacted differently, and Soukup was right there to make them eat.

“Having those different style jerkbaits was key. I had one that would float and I could work it over the top of that shallow brush. I’d pull it down into it, then let it rise. Some of them were deeper brush piles and that bait would sink down to them before I would even move it. I had one with a bigger bill that would get down into the brush and deflect off the pieces. Then of course that big one I got to go by hovering it above that brush and he came up and got it. Toss the color out the window, get a natural looking bait, and learn the behavior of the fish.”

Soukup was able to relax this week and fish clean. When fighting big fish, it is not always easy, but knowing your gear helps in those stressful moments.
“I had so much confidence in my equipment, I could hook them and just relax. When you get those big ones near the boat, they like to make a charge. I let my rod take over and then work them back up. I fished in AFTCO gear all week and loaded my Xpress with Lithium pros that took 200-pounds of weight out.”
With a final weight of 53-pounds, 9-ounces, Soukup took home the top prize of $50,000 for his efforts this week on Lake Eufaula.

David Gaston got it done early this morning on Eufaula and made it a game in the first hour. The Alabama pro spent his entire week in the shallows and let his swim jig do the work. Running new water every day, his 16-pound, 7-ounce limit today moved him up to the second-place spot.
“I started in some shallow area and before 8 am I had a limit, then caught a 5-pounder swimming that jig. I was looking for little creeks that had water left in them and I could push myself into. Today, all my weight came from one creek and every fish ate the swim jig.”

Gaston kept his set ups pretty simple rotating between two rods, both with 50-pound braided line. One with a 6.3:1 and the other with a 7:1.1.
“I had to slow down my reel ratio to get as much torque on those fish when they would eat it in the thick stuff. I was throwing a heavy jig and pulsing it up in the water column with a big beefy trailer and a living rubber skirt to move some water.”

Fishing off shore this week rotating through up to 250 brush piles, Landon Tucker broke the 20-pound mark today with 20-pounds, 1-ounce to finish in third. Eufaula is one of Tucker’s home lakes and experience with the brush was key to getting his week going.
“I started this event with like 250 brush piles and I went out Sunday and marked like 50 more during practice. I didn’t hit as many as I should have and I knew not having a limit the first day was going to hurt me.”

As seen on live today, the Adel, Georgia pro hooked a 6-pound, 1-ounce big fish on a ¾-ounce Ledge Buster spinnerbait on a brush pile he found in practice. A big fish from the spot yesterday and another lunker today.”

To get the job done this week, Tucker tossed a homemade ½-ounce green pumpkin football jig with a Berkley Powerbait Chunk, also in green pumpkin. His rod of choice was a Duckett 7’3 Heavy Jacob Wheeler rod spooled up with 17-pound P-line.
Nick Prvonozac – Warren, Ohio

The morning bite has not been good for Nick Prvonozac and today was no different. The Warren, Ohio pro caught 11-pounds, 7-ounces to finish in 4th place.
“The first spot I got to had 4 boats on it. I ran to a shallow brush pile, made a cast. I worked the bait through it and I turned my head for a split second and one was swimming at me with it. I never caught up to it but it was really shallow, I could see it was a good fish.”

Doing what got him here this week, Prvonozac ran shallow and never looked back. He caught more keepers today than any other day but they were not the size he was looking for.

“It was tough on me the rest of the day. I went shallow to look for them and I actually caught everything I saw but they were not the right size.”
Following up a 16-pound,10-ounce limit on day 1, Prvonozac relied on his 18-pound, 2-ounce bag on day two to finish 4th with 46-pounds, 3-ounces.
Louis Fernandes – Santa Maria, California

In the 5th spot, Louis Fernandes relied on a shallow bite the whole week to catch his 44-pounds, 2-ounces. Falling water hurt his day 3 bite but fishing new water is nothing new.

“The water has been falling all week. Ive been moving around and just fishing. I started in my main lake pocket but the carp had the place all mud. I actually caught a 30-pounder in there, then a 10-pound bowfin, and then a giant snapping turtle.”

The pro from Santa Maria, California decided that pre fishing on the final day was what he was going to have to do. A quick move to the river and a quick limit on a frog got him going.

“I got on this little 300-yard stretch and I worked it all day. The big fish moved up throughout the day and I would just pick them off when they would set up.”
Fernandes relied on his IROD 733 Crusher series rods and 15-pound P-Line Halo Fluorocarbon for almost all his chatterbait fish this week and mixed in an IROD 714 when he went to work with his spinnerbait.

“In practice and on day 1, the big fish would eat the frog, but since then they would just roll on it and not get it.”