SHREVEPORT/BOSSIER CITY, La. — The Federation took a slight fall on the second day of the Classic, after Day One hero Terry Fitzpatrick stumbled slightly, weighing in a small limit on a day where four limits of 20 pounds were brought to the scales.

“The fish kicked my butt today,” Fitzpatrick said. “Right now I’m going in the wrong direction. Most multi-day tournaments I usually get better each day.” 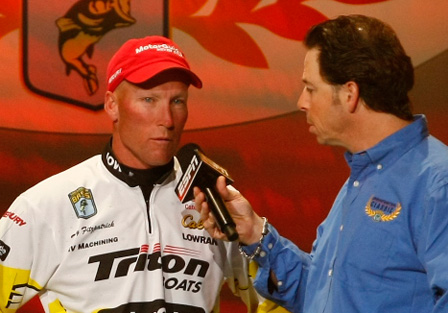 His limit, weighing 9 pounds, 6 ounces, was disappointing compared to his big 18-pound Day One catch that had him in the top five, but was more than enough to make the top-25 cut to fish on Sunday. Regardless of any stumble on the second day, his experiences being filmed for the ESPN2 telecast on Day Two was one that Fitzpatrick will never forget.

“The camera guy caught every moment of the day,” he said. “It was pretty wild. KVD was in the boat next to me this morning and he jumped into my boat and interviewed me. That doesn’t happen much in Iowa.”

The Waukon-area native has extensive experience on the Mississippi River and parlayed that into a pattern on the Red. His main area, which he has had to himself over the course of the entire tournament, features several areas of heavy cover and Fitzpatrick has targeted the local population of bass with a spinnerbait.

The main issue today was that the fish weren’t getting hooked well. With the heavy cover, Fitzpatrick hasn’t been able to use a trailer hook and that resulted in some heartbreak on Day Two.

“I lost a really big one today that flopped off the hook and just laid there next to the boat,” Fitzpatrick said. “The camera guy was filming the whole thing and I wanted to just try to reach down and grab it but it was too late.”

While many of the anglers benefited from the overcast, windy conditions, Fitzpatrick said it actually hurt his bite in the area and he hopes tomorrow is sunny with winds out of the north. The forecast may be headed that direction, but the colder temperatures are contrary to the warmth that he needs to help pull the bass out of the deeper, wood-filled water behind him and into the shallows.

On the whole, the Federation Nation performed admirably, with more anglers making the cut to fish on the final day than in recent years. Last year on Lake Hartwell in South Carolina, none of the Federation Nation anglers finished in the top 25. This year, three will wake up tomorrow with one more chance to make their mark on Classic history. Bryan Schmidt and Jay Evans will both be joining Fitzpatrick on Sunday’s final round.

“Making the final cut is amazing,” Evans said. “Nothing beats going to the Classic and making the cut. Having the three of us in the cut sort or solidifies these slots the Federation anglers have and shows the other anglers that we can compete.”

Evans had planned on returning to the spot that launched him into the top 25 on Day Two after catching 15 pounds, 9 ounces there. However, he found himself in the same area as Jami Fralick and Brian Snowden, two anglers that have a shot at the first-place trophy. Sitting in 23rd, Evans is all but out and decided to relinquish his spot to the two anglers for the final day. 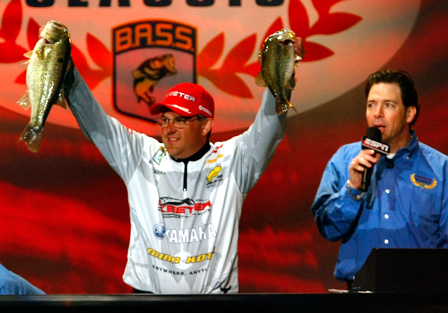 Schmidt, the Federation Nation champion, had a slightly lighter bag on Day Two, weighing in a decent 13 pounds, 11 ounces, but he left the weigh-in very disappointed with what could have been.

After catching nothing at his first stop, Schmidt made a move and quickly boated four keepers, including a 5-pound bass. Thinking he had a decent weight and wanting to conserve the area for the final day, Schmidt left the area to fill his limit elsewhere. He managed to cull once, but at the end of the day, he misjudged the rest of the field and the number of big bags that would come in.

As for tomorrow, even if he struggles, being in the Classic on the final day is exceeding all his goals.

“As I was setting my goals, I felt if I made it to Sunday, I would have overachieved,” Schmidt said. “This whole week, my observer and I have had a great time cutting up and joking all day. The big fish I caught was my third keeper of the day and we got overexcited.”

All six Federation Nation qualifiers deserve the attention they have been getting on the Classic stage and each will walk away with some great memories of their first trip to the big show.