When everything is going your way, how do you fish wisely?

PARIS, Tenn. — It’s an uncommon dilemma, but one that every pro fisherman hopes to experience at least once: When you’re fishing an area where every lure in your box seems to work, and every bass you catch is at least a borderline toad, how do you milk your fish wisely so you win the tournament? 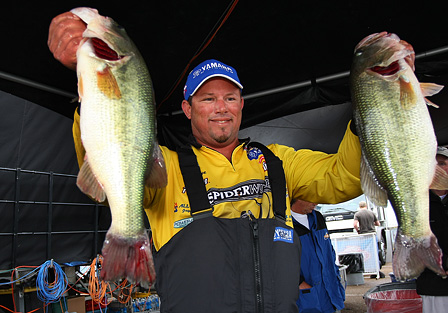 Lane shows off two nice largemouth the he boated early on Day Two of the SpongeTech Tennessee Triumph.

Florida shallow-water specialist Bobby Lane is asking himself that question after finding that “sweetest of sweet spots,” strung out along a Kentucky Lake ledge in the SpongeTech Tennessee Triumph. He’s currently playing it for everything it’s worth, sort of.

“I’m not a ledge fisherman and don’t claim to be, but this place is so hot that I don’t think it’s ever going to run out of fish,” said Lane, whose two-day showing of 54-7 has him atop the leaderboard. “Yesterday [in the opening round] I made 12 casts and caught my stringer. Today [Thursday] I had 18 pounds in 10 casts and wound up with 24-9.

“I’ve fished for about a hour and a half in two days. I don’t know what I could do if I really turned it loose.”

Perhaps Lane will have the opportunity to find out Friday, depending on how much pressure he feels from the anglers behind him in the standings. Like a long-distance runner who lets others set the pace before making his finishing kick, Lane is banking that a limit of keepers in the 25-pound range will keep him atop the standings through the Top 50 round. Then the spring comes Saturday when the Top 12 hits its full stride.

Of course, managing fish is more an art than a science, and there are no guarantees that a plan or a pattern will hold up. Kevin VanDam knows this full well, and expressed as much Thursday afternoon as he waited his turn on the weigh-in stand.

“I might have messed up today,” he said with a pained expression on his face. “I caught a good stringer (21-9), but I had a place I was holding back for later. I went by there today and saw another boat on it. Maybe I should have hit it first thing this morning, and then gone to my primary spot.

“Managing fish and spots has always been a struggle for me,” the four-time Angler of the Year said. “I won’t have to think about it Friday; I’m going to run all my stuff.”

Managing fish is sometimes all about managing bites. Bryan Snowden, currently in 12th place with 43-6, is fishing the same water as a number of other pros, but is fishing different lures, based on what he knows about their fishing styles.

“The fish are on certain spots, but so are other fishermen,” the Missouri pro said. “I try to do something different when my turn comes. I might retrieve a crankbait with a stop-and-go retrieve, or hop a jig erratically.

“The trick is to get one fish excited enough to bite, and then it seems to trigger the other fish into biting. I’m fishing the same water, but I’m trying to use a different approach somehow.” 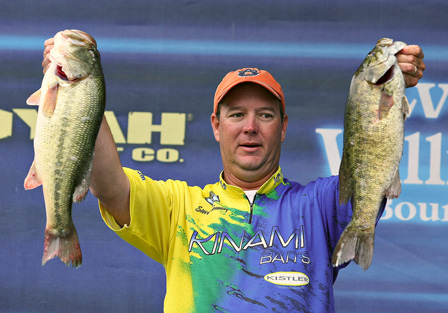 Like VanDam and Lane, Steve Kennedy is catching his bass in one general area, and it produced a 26-pound, 14-ounce stringer for him Thursday that raised his total to 44-7 and 10th place. Kennedy is worried though, that the spot is beginning to play out.

“Maybe it was the cloud cover and the fact that the water got a little dirty, but I had the sense that the fishing was slowing down as the day wore on,” Kennedy said after the second round. “I hurt them; I hope I can catch five bass there on Friday that will go about 20 pounds, but I just had the sense that the bites were dwindling. Friday will tell.”

Lane has no such misgivings. His bass are stacked up like cordwood, and he has the luxury of being able to experiment. Besides catching only enough bass in to keep the competition at bay, and guarding a spot so that other contestants don’t discover it, fish management is also about devising fallback plans when one’s pattern starts coming apart at the seams. Not that he expects the bass to stop hitting his hottest lure, but Lane tried other baits as well Thursday.

“There was a time when I would get on a lure and throw my arm off trying to catch fish with it,” the 35-year-old angler said. “Now I’ve learned to switch up and try different things. Sometimes one result is that maybe the better fish want another bait than what the smaller fish are going for. It’s all about making adjustments. So far, I’ve hammered them with one lure, and when I tried something else, it worked, too. I’m feeling pretty good.”

Another facet of fish management is having an ace in the hole, and Lane has two of them. He doesn’t want to play them, however, unless his stretch of ledge plays out on Friday.

“My two other spots are about 20 miles down the lake and I haven’t touched them since practice,” he says. “I did get some 4-pounders off them, so I think they’ll pay off if I have to go to them.”

Still, those fish might have to wait for another tournament. The way Lane is catching bass on his sweet spot, he’s not inclined to do much travelling.