EUFAULA, Ala. (May 15, 2021) – Rookie Trevor Fitzgerald of Belleview, Florida, jumped from third place into first on Day 3 of the MLF Tackle Warehouse Pro Circuit Presented by Bad Boy Mowers, Grundéns Stop 4 Presented by A.R.E. at Lake Eufaula in Eufaula, Alabama, bringing a 20-pound, 12-ounce limit to the stage. Lake Eufaula has been anything but predictable during the four-day event, which features bass fishing professionals from around the world, competing for a top prize of up to $135,000; however, a handful of anglers have consistently stayed in the top 10 all three days to move on to Championship Sunday. 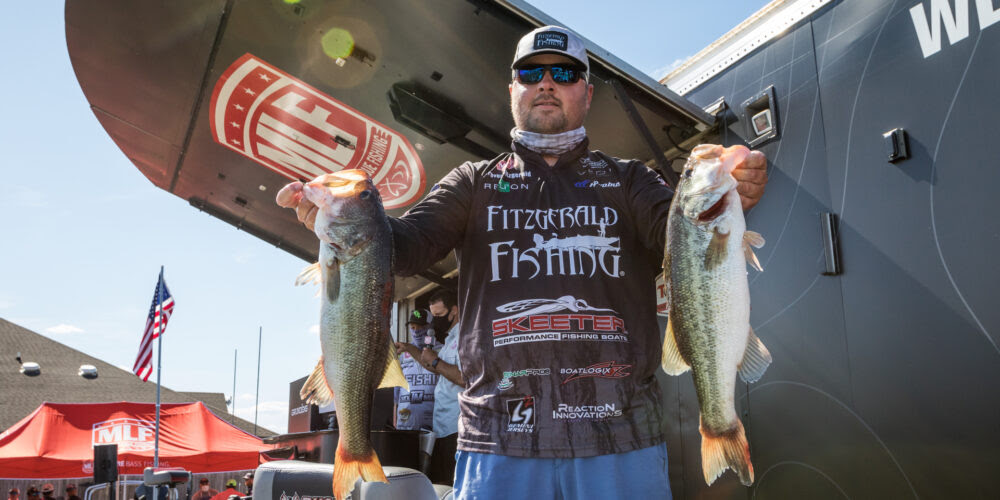 Fitzgerald’s three-day total of 53 pounds, 14 ounces moved him from third place into first giving him a 1 pound, 11-ounce advantage going into the final day, with pros Jason Abram of Piney Flats, Tennessee and David Walker of Sevierville, Tennessee within striking distance of the top spot. Abram maintained his second-place position for the third day in a row, bringing in an 18-pound, 11-ounce limit to put his three-day total at 52 pounds, 3 ounces, while Walker jumped from seventh place into third, with a limit weighing 20-12, to bring his total to 50 pounds, 15 ounces.

Fitzgerald, who brought in his biggest limit of the week on Day 3, has continued to improve his weights each day of the competition by focusing on little brush piles scattered across Lake Eufaula.

“I’m not fishing the big, beautiful piles set out on the obvious contour breaks,” said Fitzgerald. “Instead, I’m focusing on more isolated objects scattered out across vast flats. Some of it is brush, but smaller pieces of brush that have been there for a while – a single limb or laydown buried in the bottom.”

While other anglers are running bigger brush piles, Fitzgerald said he has 20 isolated pieces he has been rotating through and hasn’t had much traffic around those areas.

One pile, which Fitzgerald referred to as “magic brush”, has produced half of his total weight for the event.

“I don’t know what it is about this one brush top,” said Fitzgerald. “It doesn’t look like anything special –  just a little top about half the size of my boat. There are a hundred others out there just like it, but for some reason I catch a good fish there every time I stop to fish it. I have not seen a single boat around it all week, but I had a couple spectators around me today, so I’m hoping they don’t fish it before tomorrow.

“I think the shad in the area are probably a factor because I can see balls of shad all around it on my LiveScope and when I catch a bass there, it’s belly is full of shad. I haven’t stopped there long enough to see how many I can catch off of it, but I may just go fish it all day tomorrow and see what it can produce.”