The water matches the night.

Black of night, black of water, black of inside the hula girl minivan.

And I still have my Costa’s on … it was that kind of night.

Before the children, before the IRS 1040 long forms, this was db time.

When I was a bartender in Buffalo, N.Y.,the bars wouldn’t even close until 4 in the morning! By the time you cleaned up the sinks, the peanuts, the beer glasses and the bodies … it was darn near Bassmaster launch time.

Bartending nearly prepared me for the world of BASS.

But that was back in the day, or in my case, the fog. Back when gas was less than a buck … which was good because I use to scoot around Buffalo in a Boss 302 Mustang or on a Triumph Bonneville motorcycle.

Back in the eight-track fog.

It was Elvis and The Rolling Stones who got me prepared for “Nickel Beer in the Nickel City Night.” Sixteen ounces of draft in plastic cups … five cents. I would pretty much four-wheel drift into the parking lot and power slide between the fence and the dumpster … all the while listening to Elvis or Mick on the eight-track.

I needed every track they had, because at 8 p.m., I would walk in the door and start handing out cup after cup of cheap beer, sometimes watching the cup bob up and down EIGHT ROWS DEEP.

And then I would duck.

Because by about the fifth row … they would just start flinging the nickels back to the bar.

One the nights I drove the bike to the bar, I would just wear the helmet ALL NIGHT LONG.

But the Boss and the Bike have been replaced by, ah, hmm, ah … minivan. Eight-track with an iPod. Nickel beer with $5-dollar coffee. If you card me today you’ll see my AARP card, if I can find it in my wallet without my reading glasses.

The rhythm of my career follows the tempo of The Stones. And Joe Cocker, Jimi Hendrix, Van Morrison, John Cougar or Mellencamp, Meatloaf, Etta James and Bette Midler, Janis & Tina, Steppenwolf, Jerry Lee Lewis, The Rat Pack, U2, The Isley Brothers and 3.2 gigabytes of others.

When I sit down to write, I write to the beat of the band.

I don’t see the words I use to make a story, I HEAR THEM in my head. Don’t know who’s in there talkin’, but I figure it’s the music of my soul. I don’t sing, or play an instrument, I just type.

In the blackness there is no lake, there is no sky, I know I’m where I’m supposed to be because my GPS lady told me so.

As did the Black Eyed Peas.

“I got that Rock and Roll
That future flow”

Through the darkness comes the Black Eyed Peas.

Slowly, while still hanging on to the steering wheel, I turn and look down at my iPod, wondering about the night. And I hit the bottom of the iPod wheel, what used to be the stop button of the eight-track.

I unplug it from the speakers.

And there is still music.

I hit the glove box button, and toss it in, and slam it shut.

And the music plays on.

Frankly, I’m freaked. My iPod has been taken over by a group named after a vegetable. It’s an anti-donut plot. But then I see the hands outside.

And the hands are swinging, and pumping the air, twirling in circles above a bass boat … boom…boom…boom…three fist pumps into the dawn.

As I come around the Bass boat this is what I see as the sunrise lights up the lake…an Elite pro and his wife, DANCING ON THE LAUNCH RAMP to the music of the Black Eyed Peas.

Actually, Julie Roumbanis is the one dancing, Fred is sort of either dancing, or practicing pitchin’ and flippin’, or setting the hook, maybe pretend reeling it in. One leg is moving, as is the opposite shoulder, his head is bobbing and seems to line up with every fourth beat … but whatever these dance moves are, the man is smiling.

Fred “Boom Boom” Roumbanis: “The music gets me up, gets me going for a day on the water. I love it.”

Julie Roumbanis: “Every morning before we leave the hotel we put on our playlist and both dance around the room.” 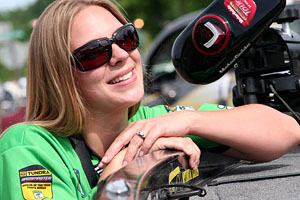 I look at Fred who is looking at Julie with exactly this look … “Ah honey don’t say that…oops…too late.”

When I write it down in the little notebook Fred, it sticks.

Here’s some of the 18 songs on the Roumbanis tournament playlist:

And others by Kanye West, P Diddy, Bush, Shop Boyz, 50-cent and T-Pain.

Not an Elvis in the bunch … but I get it, even though I have no idea who most of those folks are. 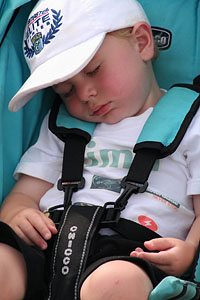 Before every tournament, the Roumbanis’ are dancing in the hotel room. ALL of them — even 2-year-old Jackson.

Julie: “We call it our ‘we songs.’ The whole family is up and dancing around the floor, Jackson loves it, we all do.”

Fred: “It helps me … I don’t listen to the songs when I’m out on the lake, but when I’m out there and things are not going so well, I think back on the morning, and the songs, the dancing, and it makes me smile, makes me happy again, gets me back into the rhythm of the day.”

And it must work, a couple days later Fred finished 12th in the tournament and currently sits in 20th place for the Angler of the Year.