Frogs are all the rage these days. There’s a good reason for that — they catch bass. In this two part series, Dean Rojas, Elite Series angler and winner of the recent Champion’s Choice event on Oneida Lake, will talk about how to fish them.

Part 1 will detail the basics — when, where and how. Part 2 will cover proper equipment and some advanced techniques that will help you score even when your buddies are struggling.

“Frogs are more versatile than many anglers realize. They’ll catch bass anytime they’re in 5 feet of water or less. I like to throw them around shoreline cover — grass, pads and around docks. The only time I don’t think about fishing with one is when the bass are deep.”

Rojas uses his recent win on Oneida as an example. He caught most of his bass the first three days by flipping and pitching plastics to small patches of matted grass in 2-3 feet of water. But, on the final day, with all the marbles on the line, his bite disappeared.

“I knew I was going to be in trouble if I didn’t start catching bass. So, I went to my Dean Rojas Signature Series Bronzeye Frog. I fished it around the grass mats, the same ones I had been flipping. Bass that were ignoring my plastics started slamming my frog. That’s what it’s designed to do. It worked perfectly.” 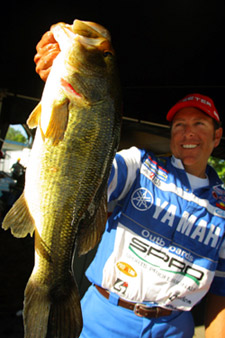 “It’s a perfect bait for pads or docks. You can move it along in the open areas and pull it up on a pad if you want. Or, you can skip it under a dock and then rest it by a vertical support or anything else that’s under there. It’ll act exactly like the real thing.”

The best places, however, may be in rivers and streams.

“I think we’re just beginning to see the results of frog fishing. As more guys fish them, new techniques will be developed. Who knows where it will end?”

“River and stream bass are shallow by nature and they’re used to eating things that are a little different. They’re tough — they have to be to survive. That’s perfect frog water, especially backwater areas when the water has a little color to it.”

Regardless of where he fishes, however, Rojas uses three basic retrieves with his Bronzeye Frog.

“If they want something soft and quiet, I try to toss it out, let it sit for a moment and then walk it in place. It takes some practice to walk one without moving it forward but it’s worth the effort. That’s a great way to provoke strikes from bass that are in shallow water and don’t want anything that’s moving very fast or making much noise.”

“Sometimes bass want something moving, but not too fast. When they’re in that mood I toss it out, retrieve it immediately for a short distance, stop it, and then start another short retrieve. That’ll interest them when they are somewhat aggressive but maybe don’t really want to chase anything.”

(C) Cast — immediate slow retrieve creating a wake — continue until it’s out of the strike zone.

“If they want it moving or you hear guys are using a wake bait, this is the selection to make. If you reel it back — slow and steady — it’ll almost make a wake just under the surface. That’ll generate bone jarring strikes from bass that are in the mood to chase something.”

When it comes to color, Rojas is a simple man. He likes black or brown for low light or dark water conditions and white or green for bright light or clear water situations. When in doubt, go natural — green or brown.

“I think we’re just beginning to see the results of frog fishing. As more guys fish them, new techniques will be developed. Who knows where it will end? Besides, they’re fun to fish. Everything is visual. And, as every angler knows, there’s no better way to catch a bass than on top.”