Gleason is Just Going with it

Darold Gleason and the rest of the Elite Series field had a quick morning on the water after day one of the Guaranteed Rate Bassmaster Elite on Pickwick Lake was postponed due to high winds and unsafe river conditions. 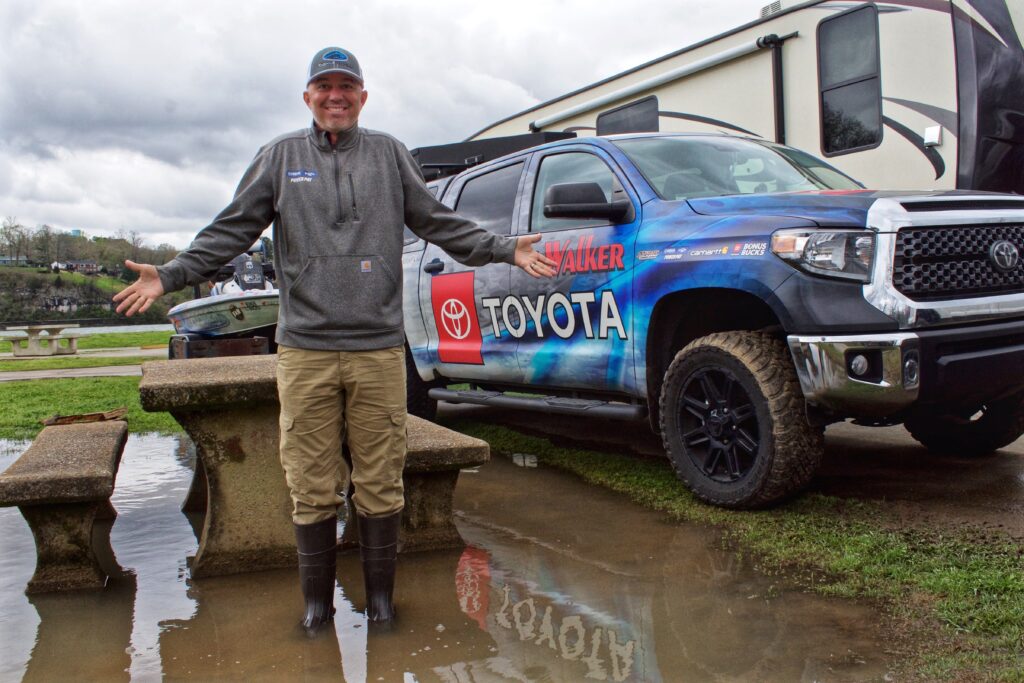 For Gleason and many others, this is the second “day off” in a row thanks to wave after wave of severe weather rolling through the area yesterday during the final practice period. These dangerous weather systems included thunderstorms, hail, damaging winds, heavy rain, and high risk of tornadoes.

Gleason even spent some time taking shelter with his wife Randi, dog Rowdy, and fellow pros like Team Toyota’s Gerald Swindle when tornado sirens started blasting through the McFarland Park Campground, where many pros are staying this week. Not exactly how a fisherman envisions his final day of practice transpiring.

After a decent start to the season, the Elite Series rookie was looking forward to keeping the ball rolling here on Pickwick after having a solid first two days of practice. But the weather that rolled in during Wednesday’s final day of “practice” changed everything.

“I’m sure all the fish I found in practice will be gone by tomorrow,” Gleason estimated. “I was catching fish in two to four feet of water on Tuesday, which will now be six to eight feet of water. And who knows what the current and water clarity will have done in the areas I planned on fishing. We’ll just have to go fishing.”

As excessive amounts of water continue to dump into the Tennessee River system, local authorities made the decision to evacuate the McFarland Park Campground shortly after anglers were pulled off the water. The Gleason’s and around 20 other Elite Series pros quickly had to pack their campsites up and find higher ground, literally.

“We were told the water is coming up at least another three feet, so the whole campground will be under water. I won’t lie, it’s a bit of a cluster, but this is part of the RV life,” Gleason said with a smile. “I’m just glad I packed these goofy rain boots. They’ve come in clutch the past 24 hours!”

Gleason is never short on humor or optimism. The longtime Toyota Bonus Bucks participant has seen a lot during his years as a Bassmaster Opens pro and one of the top fishing guides on Toledo Bend Reservoir; and he knows that remaining even-keeled helps every situation.

“At the end of the day all you can do is stay positive,” Gleason offered. “Everyone out here is dealing with the same conditions. So instead of getting too worked up it’s best to stay calm and take each challenge as it comes. Safety is paramount and everything else is a bonus.”