GROVE, Okla. — When Drew Gregory first saw the schedule for the 2022 Yamaha Rightwaters Bassmaster Kayak Series powered by TourneyX, he told his wife that he was going to win at Grand Lake. 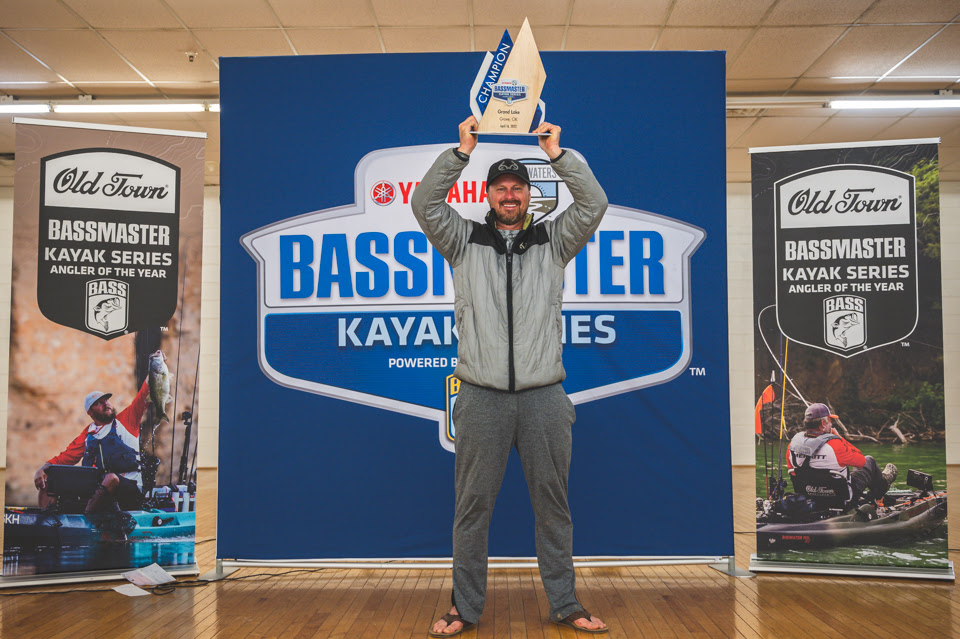 Drew Gregory of Canton, Ohio, has won the 2022 Yamaha Rightwaters Bassmaster Kayak Series at Grand Lake powered by TourneyX with a five-fish limit of 91.5 inches. Photo by Mark Cisneros/B.A.S.S.

Then on Saturday, the Canton, Ohio, native made good on that promise, catching a five-bass limit that measured 91.50 inches to earn his first Bassmaster Kayak Series event victory and a $3,400 check.

Anchoring his bag with a 20.25-incher, Gregory beat second-place angler Daniel Maffei by over 8 inches and third-place angler Mark Pendergraf by over 9 inches.

“I said I was going to win this tournament and figure it out,” Gregory said. “It has been my plan all year to fish four of the five to have a chance for the (Old Town) Angler of the Year title. I have a kayak I designed that is coming out really soon for Crescent Kayaks and it is pretty crazy to win this right before this boat is coming out.”

Gregory had never been to the Oklahoma reservoir, but through map study he thought it might set up similarly to Lake Dardanelle in Arkansas, a lake where he won a Hobie Bass Open Series event.

“(Dardanelle) has some clear Ozark streams feeding it and then part of the lake is muddier coming from the farmlands,” he explained. “This lake is similar to that. It has clearer streams and then it has some creeks that are muddier.”

In practice, Gregory pinpointed a spawning pocket where prespawn bass were staging and fattening up for the spawn. When he arrived on tournament day, the bass he found had relocated and it took a little while for Gregory to find them.

“I was getting really concerned. I realized they couldn’t have gone far. The water has been coming up on this lake. It was under full pool by half a foot and has risen about a foot,” Gregory said. “When the water had risen, the fish had moved to the bank and were in about a foot of water getting on those beds.”

After starting the day by catching a couple on a Z-Man SlingBladeZ spinnerbait, Gregory used a 3/8-ounce Z-Man CrossEyeZ Flipping Jig paired with a Z-Man Pro CrawZ trailer to target undercut roots and trees located on steeper banks. His limit was mostly full of fatter females that were preparing to spawn.

He noted a couple of those females could have been on bed but had not dropped their eggs. The bucks he caught, meanwhile, had torn up tails and were preparing beds.

“I caught two or three on the spinnerbait, but my whole day changed when I picked up the jig,” he said. “I flipped this one bush and the line jumped, I set the hook and it was an 18-incher, my first big fish. That clued me in to maybe the moving baits aren’t the deal today. I went around the pocket again with the jig and started getting bit like crazy.”

Gregory went back to the basics of kayak fishing, using arm strength and a paddle to maneuver his 10-foot Crescent UltraLite Kayak. With no graphs, motor or shallow-water anchor on this particular model, he was able to focus on what was happening in the moment.

“In my map work and study, there were enough good-looking places that were my kind of place — hard to get to and where you almost need a lightweight kayak to get in them,” he said. “When everyone else has that stuff, they can’t help but use it.

“The reason I got into kayak fishing was the simplicity of it. That kayak opens up a lot of water for me that other people don’t look at. I enjoy rivers, creeks and backwaters. That is the reason kayak fishing started.”

Despite not having any practice on Grand Lake prior to Saturday, Maffei landed 83.25 inches to take home second place and $2,000. Using mostly a finesse Carolina rig with a watermelon candy Zoom Baby Brush Hog, the Dennis, Kan., native targeted prespawn bass that were relating to bigger rocks.

“It was all map study and I picked a cove I thought looked good that fished to my strengths. I focused on areas where I thought the prespawn fish were staging in the cove,” he said. “I had my first two fish pretty early on with a spinnerbait and then I was working a secondary point flat and missed three on a Texas rig. After that, I went to the finesse Carolina rig.”

Most of his damage in that cove was done in a 100-yard stretch.

Pendergraf caught all of his 82-inch limit on a wacky-rigged XCite Baits Xtreme Stix in Duck Creek around root balls as well as the backs of docks and walkways on the docks. With rising water affecting his areas as well, the 2021 National Champion said the bass were pushed up and ready to start spawning.

Most of the bass Pendergraf caught today were likely buck bass, and fishing his bait slowly produced the majority of his bites.

“In prefishing, there was the Angler’s Choice Classic and 300 boats were on the water Thursday and Friday,” he said. “The lake was highly pressured and I had to fish superslow to get my bites.”

Tennessee native Keith Shadwick only landed one bass, but his 22.75-inch largemouth earned him Big Bass honors and $500.

The next Bassmaster Kayak Series event will be held on Lewis Smith Lake in Alabama on May 21 followed by the season finale at Pickwick Lake in Tennessee on Oct. 8-9.

The tournament was hosted by the City of Grove.