DAYTON, Tenn. (May 23, 2021) – Toyota Series angler Jordan Hartman of Benton, Kentucky brought a five-bass limit to the scale Saturday weighing 14 pounds, 12 ounces to win the three-day Toyota Series Presented by A.R.E. at Lake Chickamauga Presented by Googan Baits in Dayton, Tennessee. Hartman’s three-day total of 15 bass weighing 51-13 earned him the win by a 12-ounce margin over second-place angler Seth Davis of Harrison, Tennessee and earned Hartman the top payout of $51,500 in the third and final tournament of the 2021 Toyota Series Central Division Presented by Neat Companies. 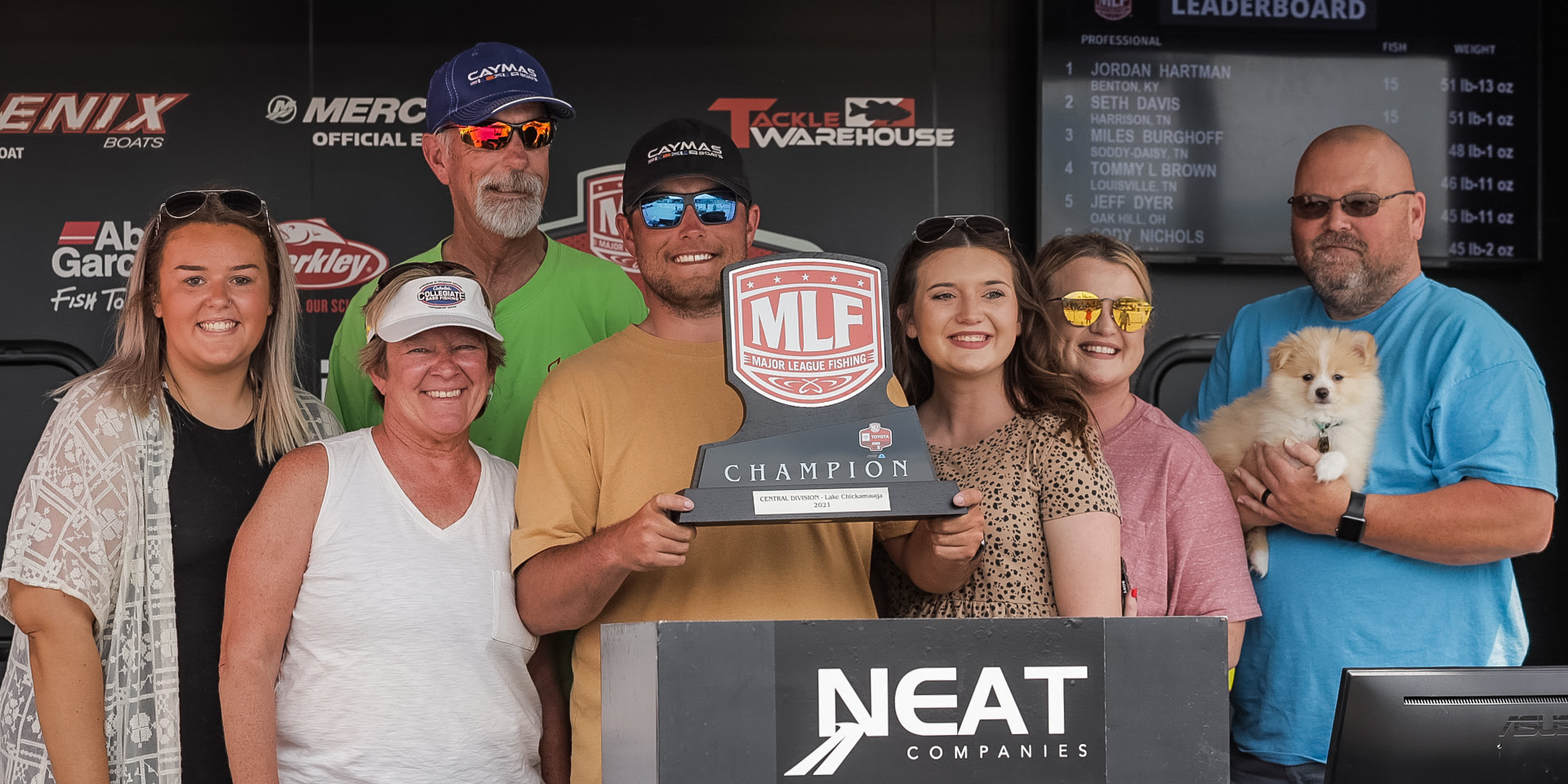 Hartman said Chickamauga in the summer suits him perfectly and was a great place to take home his first MLF win.

“I got to catch them exactly how I wanted to,” said Hartman, who is a Murray State graduate and just 24 years old. “I love fishing offshore. If I can be off the bank, I’m going to do it. I ledge fished the whole time. I spent every hour of practice looking at those screens. I committed to offshore and never went to the bank one time.

“I found about 30 schools, but there were only approximately five of them that would bite consistently,” continued Hartman. “I knew all 30 of them had potential, but you take into consideration the boats, and you can probably cut about half of those off. So, it was tough.”

With the boat traffic, fishing pressure, lack of current and negative mood of many of the offshore bass, Hartman was really the only pro in the entire Top 10 that stayed offshore exclusively.

“I had one area that I caught almost everything I’ve weighed on,” said Hartman. “It was a little high spot with some shells up there – I actually wasn’t even scanning it, I was just pulling up and fishing. There was one cast on this spot that I was catching almost every fish on. You had to bring it over the shells, and as soon as it fell off, they were sitting right on the back side.”

On his best spot, Hartman said he stuck with a Strike King 5XD and a True Bass Shuttlecock Hair Jig. Deeper, on other spots, he long-lined a Strike King 10XD.

While Hartman did much of his damage on his shallow ledge, which topped out at about 9-feet deep, he also caught fish as deep as 28 feet on the 10XD and ran at least a half dozen places each day of the event. One of his final fish, which may have given him the edge over Davis, was actually caught on a Strike King Sexy Spoon.

“I pulled up on this spot where I hadn’t had a bite all week,” said Hartman. “I also hadn’t had a bite on a spoon all week – I almost put that spoon in the box Friday night. But I pulled it out, threw it out there, and I didn’t even do anything. It just went slack. Everything just went my way this week – when you’re going to win, you’re going to win, and everything just clicked for me in this event.”

The 2021 Toyota Series presented by A.R.E. consists of six divisions – Central, Northern, Plains, Southern, Southwestern and Western – each holding three regular-season events, along with the International division. Anglers who fish all three qualifiers in any of the eight divisions and finish in the top 25 will qualify for the no-entry-fee Toyota Series presented by A.R.E. Championship for a shot at winning $235,000 cash, including a $35,000 Phoenix MLF BIG5 Bonus for qualified anglers. The winning Strike King co-angler at the championship earns a new Phoenix 518 Pro bass boat with a 115-horsepower Mercury outboard.

The 2021 Toyota Series Championship presented by A.R.E. will be held Oct. 28-30 on Pickwick Lake in Counce, Tennessee, and is hosted by the Hardin County Convention and Visitors Bureau.