MASSENA, N.Y. (Aug. 19, 2022) – It was a battle at the top of the unofficial leaderboard for most of the day between several hard-charging pros, but pro Nick Hatfield of Greeneville, Tennessee – the 2022 Polaris Rookie of the Year (ROY) – maintained his lead atop the field at the Major League Fishing (MLF) Tackle Warehouse TITLE Presented by Mercury – the Pro Circuit Championship – in Massena, New York. Hatfield shored up the Group B win Friday, punching his ticket straight through to Sunday’s Championship Round with a five-bass limit weighing 24 pounds, 3 ounces, bringing his two-day total to 46-4. Hatfield finished 2-pounds, 7-ounces ahead of Power-Pole pro Chris Lane of Guntersville, Alabama , who caught a two-day total of 43-13 to end the Qualifying Round in second. 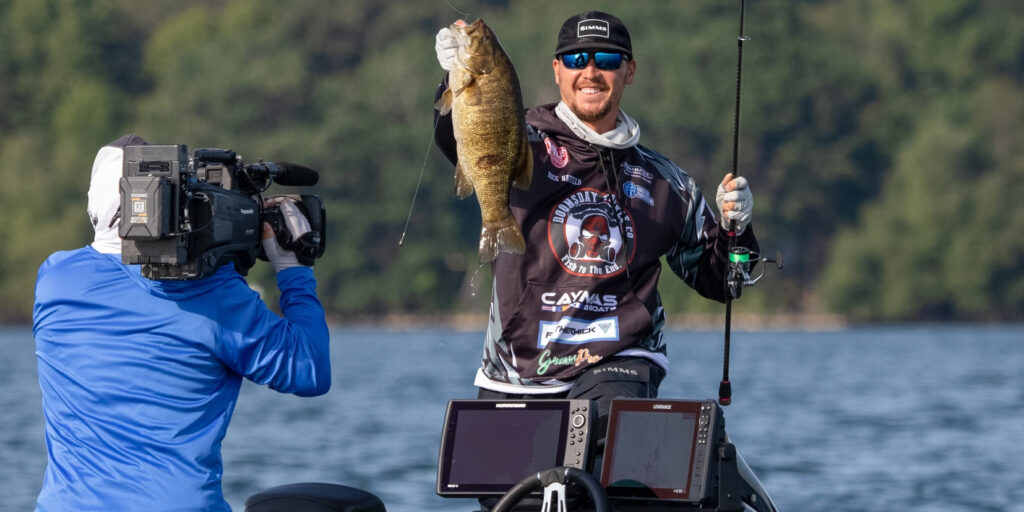 Group A and Group B Qualifying Round winners will enjoy a day off on Saturday, while the remaining 18 anglers – 9 from Group A and 9 from Group B – will compete in the Knockout Round. Weights will be zeroed, and anglers will compete to finish in the top eight and advance to Championship Sunday.

The Championship Round on Sunday will feature Group A winner Spencer Shuffield, Group B winner Nick Hatfield and the top eight anglers from the Knockout Round, competing in a final-day, five-bass-limit shootout for a top prize of up to $235,000. The six-day event, hosted by the Town of Massena, showcases the top 48 pros in the 2022 Pro Circuit standings, along with last year’s reigning TITLE champion and reigning Angler of the Year – all competing for a purse of more than $800,000.

“I caught a lot of good fish the last two days, but there are a lot of great fishermen right behind me and they were on them as well,” Hatfield said. “I felt like I made some good decisions today and winning this automatic berth to the Championship Round feels good, but I’ve got to get back out there and do it again on Sunday.

The wind could definitely be a factor for Hatfield, who is making an hour and 45-minute run to his primary spot.

“I had some mechanical issues today, but was able to make it back for the weigh-in. I’ll definitely be getting that fixed on my day off and getting everything prepped and ready to go for the final round.”

Hatfield said he knew he’d found something special in practice but is pleasantly surprised at how much the area is producing.

“I have a mile stretch of isolated clumps of rocks that’s really good. There’s a ton of bait in there – perch and gobies – and I’m even seeing some balls of bait,” Hatfield said. “In practice, you don’t really know the extent of what you’ve got, you just kind of catch a couple then leave it alone. So it’s definitely playing out better than I expected it to.

“Some of the bass are in 20- to 30-feet of water, but most are in 35- to 45-feet. I’m utilizing my (Garmin) LiveScope and moving around until I find some, then just pitching a drop-shot at them. If I see one big fish, there are usually 4 or 5 right there with it and I’m able to catch at least one of them.”

Hatfield only caught 3 bass out of his primary spot on Friday, but those bass weighed upwards of 15 pounds. Although he’s basically laid off his fish the first two days of competition, he was still able to finish on top, and said he’s super excited for Championship Sunday.

“I feel really good about what I’m doing and where I’m at,” Hatfield continued. “I know these smallmouth could leave and things could change on Sunday, but I’m just excited to be fishing on the final day and hopefully I can go out there and do what I did today or better.”

The top 10 pros from Qualifying Group B that now advance to Saturday’s Knockout Round on the St. Lawrence River are:

Hatfield brought a smallmouth weighing 6-pounds, 3-ounces to the scale to win the Group B $1,000 Berkley Big Bass Award. Berkley awards $1,000 to the angler in each group that weighs the biggest bass over their two-day Qualification Round.

The MLF Tackle Warehouse TITLE Presented by Mercury – the Pro Circuit Championship – features a hybrid tournament format. All 50 anglers were seeded into two groups of 25 – Group A & Group B, based on points earned in 2022 qualifying events – where they competed in Qualifying Rounds over the first four days of the tournament.

Anglers will take off at 7 a.m. ET Saturday and Sunday from the Massena Intake Boat Launch, located at 1415 State Hwy 131 in Massena. Weigh-ins will also be held at the boat launch daily at 3 p.m. The MLF NOW! broadcast team of Chad McKee, Marty Stone and J.T. Kenney will break down the extended action from 7:30 a.m. to 2:30 p.m. daily. Fans are welcome to attend the event or follow the action online through the MLF NOW! live stream and coverage at MajorLeagueFishing.com.

Along with the launch and weigh-in, fans and community members are invited to the MLF Fishing and Outdoor Expo on Saturday and Sunday, Aug. 20-21 from noon to 8 p.m. ET at the Massena Intake Boat Launch, where fans can meet the pros and check out the latest in fishing and outdoor gear. The expo includes live music, food trucks, kids’ activities, giveaways, fireworks and more.

The first 100 middle school and high school students will receive a free Abu Garcia rod and reel at the Expo on Saturday and Sunday and fans can register for a Polaris Sportsman 570 ATV giveaway onsite at the Expo. The winner will be drawn after the final weigh-in on August 21. PAW Patrol’s Skye and Marshall will also be at the event with MLF pro Charlie Evans and will be available for photos. Appearance times may vary. Visit MajorLeagueFishing.com for updates and more details.