LEESBURG, Fla. (May 23, 2021) – It turns out Brett Hite could have taken the day off. After catching a whopping 34 bass weighing 83 pounds, 5 ounces on Friday, the Phoenix, Arizona pro added eight more bass totaling 17 pounds, 2 ounces Sunday to coast to an easy victory in the Qualifying Group A round at the Major League Fishing (MLF) Bass Pro Tour Favorite Fishing Stage Three Presented by Bass Cat Boats at the Harris Chain of Lakes with a two-day total of 42 bass for 100 pounds, 7 ounces. 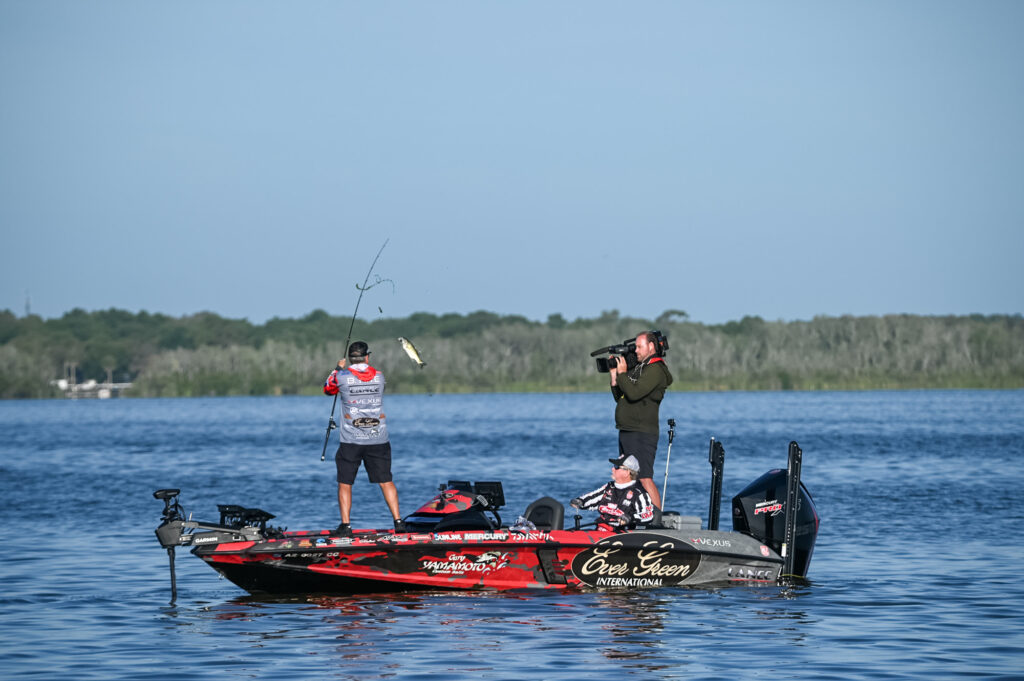 Hite earned the win by a 25-pound, 4-ounce margin over second place and now advances directly into the Championship Round of competition, set for Wednesday. The six-day tournament, hosted by Lake County, is being live-streamed online and filmed for television broadcast on the Discovery Channel and the Outdoor Channel later this year.

The top 20 anglers from Group A will now enjoy an off day, while the 40 anglers in Qualifying Group B will complete their two-day Qualifying Round of competition on Monday. The Knockout Round, featuring 38 anglers competing to finish in the top eight, will take place on Tuesday. Wednesday’s Championship Round will feature Hite, Monday’s Group B winner, and the top eight anglers from the Knockout Round competing in a final-day shootout for the top prize of $100,000.

“All of the hard work that we put in pays off every once in a while, and it’s been a really good couple of days for me so far,” said Hite, who has five career wins and 33 top-10 finishes in MLF competition. “Today, it was almost like those fish were kind of in shock because the wind had been blowing 20 to 30 (miles per hour) every day for the last week and today it was dead, slick calm. I guess if I am going to have a bad execution day, it’s nice to have a 40-pound lead when I do it. I’m looking forward to a couple of days off – my shoulder needs it after what seems like 1,000 casts a day.”

Like Friday, Hite relied mainly on a Z-Man Jackhammer and an EverGreen Grass Ripper swimjig to catch his fish.

“The bread and butter bait for me today was the (Z-Man) Jackhammer StealthBlade (green pumpkin shad) with a Yamamoto Zako trailer,” Hite said. “We designed this bait – EverGreen, myself and Morizo Shimizu – for days like this. In the slick calm conditions, those fish are just real finicky, and the StealthBlade just doesn’t vibrate quite as hard as the regular Jackhammer. I threw it with 14 or 16-pound Sunline FC Sniper fluorocarbon line and that’s what I caught most of my fish on today.

“I also caught some key fish on an original ½-ounce (Z-Man) Jackhammer (green shad), also with a Yamamoto Zako (sight flash) with 20-pound Sunline FC Sniper fluorocarbon,” Hite continued. “I threw it on a 7-foot, 3-inch heavy-action EverGreen Combat Stick with a 6:3:1 Daiwa Tatula Elite reel. And I let the cat out of the bag this week on our new swimjig. I worked on this thing for about a year and it’s going to be coming out in a couple of weeks – the new EverGreen Grass Ripper swimjig. I fished that with a Yamamoto Zako Paddletail Swimbait (sight flash) with 20-pound Sunline fluorocarbon line and a Daiwa Tatula Elite with a 7:1 gear ratio.

“I’m super excited to advance into the Championship Round on Wednesday,” Hite went on to say. “I’ve got a good game plan, and we’re going to let those fish rest and hopefully have a shot to win this thing.”

Tuskegee, Alabama pro Mark Daniels Jr. felt the pressure of the SCORETRACKER leaderboard on Sunday. After starting the day in 10th place, Daniels found himself sitting in 21st place, outside the Toro Cut Line, with just six minutes left in the day. Luckily for Daniels, he caught a 1-pound, 8-ounce largemouth as the clock ticked down to overtake pro Randy Howell by just 5 ounces and advance to the Knockout round in the final spot.

“Oh my gosh, that was one of the most stressful days of my entire career,” a relieved Daniels said in his post-game interview. “I don’t have any gray hairs yet, but I think I might have gotten a couple after today. I was trying to fish the conditions, but nothing was working. I had to fall back on what got me here, a Z-Man ChatterBait with a Z-Man RaZor ShadZ trailer. And golly, I can’t believe it was a 1-8. Literally the fish that I needed. He could have been a 1-7 and I wouldn’t be here. Unreal. I’m so, so happy that I’m going to get another opportunity in the Knockout Round.”

The top 20 pros from Qualifying Group A that now advance to Tuesday’s Knockout Round on the Harris Chain of Lakes are: