The second-year Elite pro and two-time Bassmaster Classic qualifier had it so good he was able to take a nap on the water Friday while defending his area. But on Saturday, the final day of competition at the SpongeTech Tennessee Triumph, things took an unexpected turn. 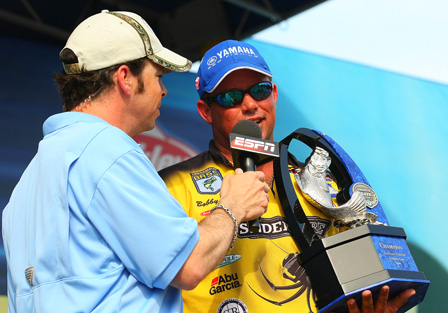 First, a nerve-wracking fog delay of more than 2 hours demolished Lane’s productive early bite. Then, Lane had to contend with an armada of spectator boats — nearly 120 by some counts — that were parked near his money spot.

But Lane, a veteran tournament angler, stuck to his guns and held on to accumulate 16 pounds, 15 ounces Saturday for a four-day total of 97 pounds, 9 ounces, which was enough to hold off four-time Toyota Tundra Bassmaster Angler of the Year Kevin VanDam (92-1) of Kalamazoo, Mich.

With the victory, Lane earned $100,000 and moved up to 11th in the Toyota Tundra Bassmaster Angler of the Year standings. That position puts the 35-year-old in fantastic shape to qualify for the 2010 Bassmaster Classic, set for Feb. 19-21 on Lay Lake out of Birmingham, Ala., and advance to the inaugural Bassmaster Elite Series postseason, the Toyota Trucks Championship Week, which will play out Sept. 10-18 on Alabama’s Lake Jordan and Alabama River featuring the top 12 anglers in the AOY standings. 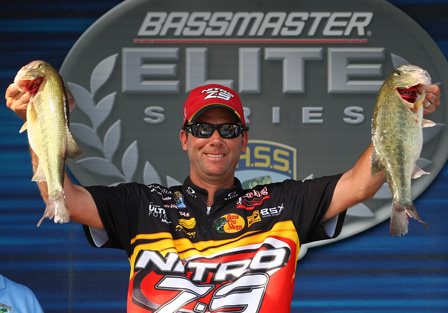 “Early this morning, all I wanted to do was get on that spot,” said Lane, whose brother younger brother Chris also fishes in the Elite Series. “That was one of the most stressful moments of my life sitting there waiting and was probably about the worst thing that could have happened to me. But I was able to fish clean the whole day and it was my time.”

On Saturday, Lane’s primary spot — an area filled with heavy shell that generated high numbers of baitfish that bass were feeding on — proved nowhere near as fruitful as it had in the first three days. While he was able to land four keepers in the area during the first hours of competition, the size of the fish couldn’t compare to those on Days One through Three. So, Lane made a decision to run elsewhere — a last resort — and was able to fill out his limit with a fifth keeper.

Still, he wasn’t satisfied. In the back of his mind, he said he was calculating over and over again to determine if he had blown what was his best chance at a victory. With a little more than two hours remaining in his competition day, he returned to the primary spot he had nicknamed the “promised land” and boated his biggest bass of the day, a 5-9 brute.

That was enough to seal it, as VanDam made a half-hearted charge that wasn’t quite enough. Lane used several baits to considerable success, including a Berkley Power Worm and a swimbait, but a crankbait landed the last fish. Doubly satisfying for Lane was that he scored victory fishing a style he doesn’t consider a strength. A shallow-water specialist who excels on Florida fisheries, he mastered the art of ledge fishing for one week.

Perhaps lost in the shuffle was Lane’s calculated gamble that he executed the first three days. Lane made the interesting decision — a risky one — to scour his productive area for just more than 3 hours through the first three days, leaving nearly 20 hours on the table. It proved to be a key to the victory.

“They didn’t pull current today and the wind wasn’t blowing early and that was just a terrible combination for me,” said Lane, whose daughter, Alexis, graduated from pre-kindergarten Friday back home in Florida. “I love to do it but I’m not a big ledge fisherman. I wasn’t happy all day but this victory really means a lot to me.”

While VanDam fell short at Kentucky, he will take solace in his lead — albeit a tiny one in the 2009 Toyota Tundra Bassmaster Angler of the Year standings. By virtue of jumping over Skeet Reese of Auburn, Calif., into second place here, VanDam maintained his lead in the season-long standings.

VanDam, the defending champion on Kentucky, said the majority of his bass fell for a Strike King Series 6 extra deep crankbait. He was allowing the bait to hit bottom — usually comprised of shell — where the bass would attack it.

“Kentucky Lake is absolutely awesome,” said VanDam, a two-time Bassmaster Classic champion. “While I’m never satisfied with second place, the ultimate goal is the Angler of the Year and I feel good about my chances there.”

The Angler of the Year title is worth $200,000 and it is considered one of the most prestigious awards in the sport. Reese, the 2007 TTBAOY, continued his incredible run, scoring fourth at Kentucky with 90 pounds, 7 ounces.