ANDERSON, S.C. — Cody Hollen had a feeling that his favorite lipless crankbait would be a difference-maker during Friday’s final round of the TNT Fireworks B.A.S.S. Nation Championship.

Boy, was he ever right. 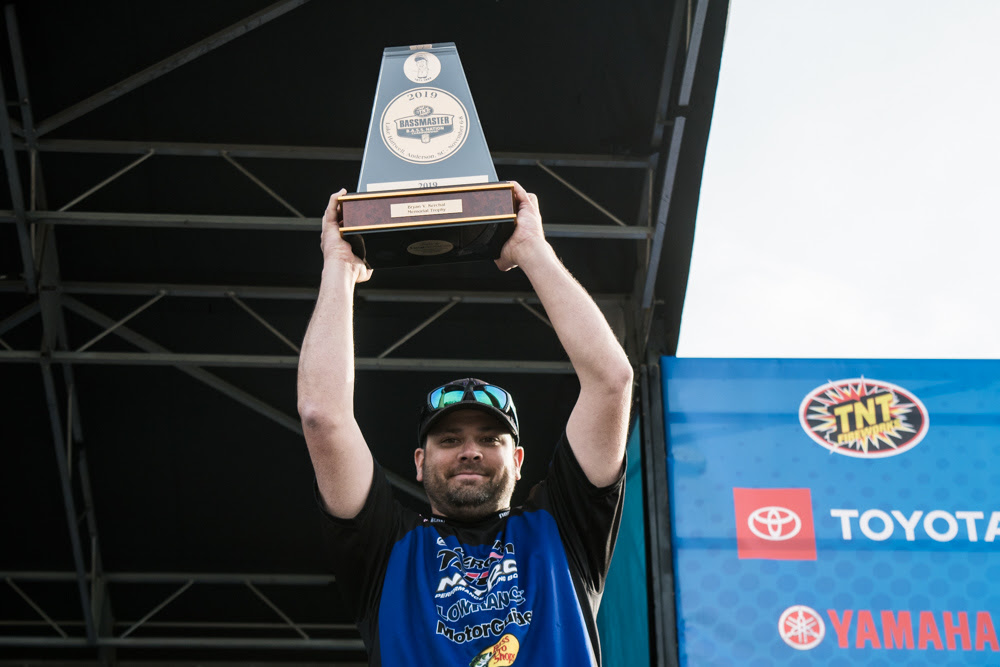 The 35-year old angler from Beaverton, Ore., caught the heaviest bag of the tournament — a five-bass limit that weighed 13 pounds, 12 ounces — to vault from 10th place to the tournament title here on Lake Hartwell in the northwest corner of the Palmetto State.

Hollen finished with a three-day total of 32-12, and he reaped a wealth of spoils with the victory. Not only did he grab a berth in the 2020 Academy Sports + Outdoors Bassmaster Classic presented by Huk, he also won a Skeeter/Yamaha cash award of $20,000, an invitation to fish the 2020 Bassmaster Elite Series and paid entry into the 2020 Basspro.com Bassmaster Opens division of his choice.

He was one of 59 boaters and 115 total anglers who qualified for the championship at Hartwell. Competitors hailed from 47 states and 11 foreign countries, and they competed for a total of $140,300 in prize money this week.

Hollen made the final push to jump ahead of all of them, and it was his decision to fish exclusively with a Yo-Zuri lipless crankbait in the chrome with a blue back color that paid dividends, he said. He tried other lures earlier in the tournament, but he eventually decided to forego variety for what was working best.

“I had confidence coming into today,” Hollen said. “I had five or six cane piles way down lake where the water was cleaner than it was up here. They were in those cane piles. I was setting myself up maybe 30 yards back of them and casting into them.

“The bait would hit the cane pile and the fish would hit it hard.”

Hollen was in 19th place after Day 1 with a limit that weighed 9-2, and he followed with a 9-14 limit on Day 2 to make the cut. He entered the final day in 10th place, but he trailed leader Justy Varkevisser of South Africa by only 3-5.

The win was a dream come true for Hollen, who qualified for the Championship via the B.A.S.S Nation trail in Oregon and the B.A.S.S. Nation Western Regional held on California’s Lake Shasta in May.

Now he’s locked up a spot in the Classic, which will be held at Alabama’s Lake Guntersville on March 6-8. Weigh-ins will take place in Birmingham, the city where B.A.S.S is headquartered.

It’s all a new experience for Hollen, but he’s ready for the challenge.

“I have no idea of anything about Guntersville, but I’m going to go there and give it 110 percent,” he said.

So, too, will Taylor Smith and Cam Sterritt, who finished second and third in the Championship, respectively, and also earned spots in the Classic.

Smith qualified for the B.A.S.S. Nation Championship as the leading boater from the Idaho Nation. Like Hollen, he also fished cane piles, though he opted to throw a football-head jig most of the tournament. He was in sixth place heading into Friday, and he moved up the standings courtesy of a 10-15 limit, which was the third heaviest of the day. He caught 10 pounds Wednesday and 10-8 Thursday.

“I’m feeling a lot of emotion,” Smith said. “I’ve been watching The Bassmasters (on television) with my dad as long as I can remember. It means a ton to make the Classic. I have more unread text messages in my pocket right now than ever. My support network is incredible.”

Sterritt caught a 10-7 limit Friday, which followed the 13-8 he weighed Thursday. That haul was the second-heaviest bag of the tournament. He caught all of his bass drop shotting or skipping a Neko rig under the docks jutting from Hartwell’s shorelines.

Though only 23, Sterritt has plenty experience in B.A.S.S. events. He began fishing Junior Bassmaster events when he was 10 and was part of the first High School National Championship in 2015.

“It really taught me how to compete in these tournaments,” he said.

Stanley Beebe, who lives in San Luis Obispo, Calif., clinched the nonboater division Thursday with a two-day total of 17-13. That was best among the 56 nonboaters competing at Hartwell, and it earned him a spot in Friday’s final round against the event’s top boaters.

Beebe won a $10,000 Skeeter/Yamaha cash prize for winning that division, as well as entry into the Basspro.com Bassmaster Opens division of his choice.