KNOXVILLE, Tenn. — Ott DeFoe came into Friday’s opening round of the GECIO Bassmaster Classic presented by DICK’S Sporting Goods with two patterns in mind that he thought would work on the Tennessee River. 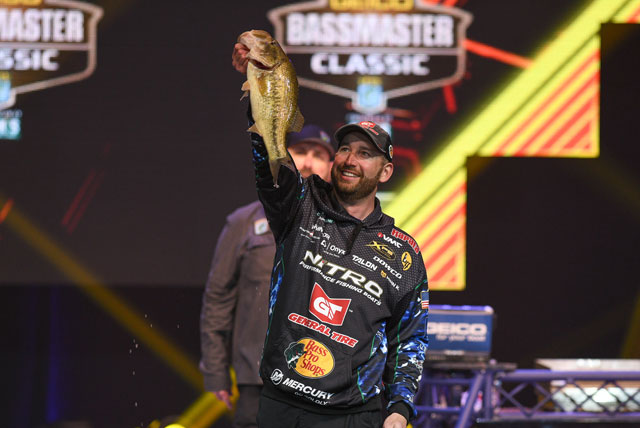 Knoxville native, Ott DeFoe leads Day 1 of the 2019 GEICO Bassmaster Classic presented by DICK’S Sporting Goods after weighing in a five-bass limit of 20-0.

Only one of them did — and even then, just barely.

But it worked well enough to give him the lead at the Super Bowl of Professional Bass Fishing.

DeFoe caught only eight keeper bass on the day, but his best five weighed 20 pounds and gave him an early cushion over Arizona pros Roy Hawk, who was second with 17-11, and Clifford Pirch, who was third with 16-11.

“I got five good bites all day, and I landed them,” said DeFoe, a Knoxville resident who was considered by many to be the odds-on favorite coming into the event. “Honestly, it felt like a very tough day.”

DeFoe’s two-pattern strategy included one tactic he believed would produce heavier bass and another he thought would be a good “limit filler.” The limit-filling pattern didn’t work at all.

Fortunately for the Tennessee pro, the big-fish strategy produced a 6-pound largemouth that anchored his catch.

“A 6-pounder here is a really big one,” said DeFoe, who also took the Day 1 lead in the Berkley Big Bass competition. “So to get that one and four other pretty good ones, I felt really blessed.”

This marks the first time that Fort Loudon and Tellico Lakes have hosted a major Bassmaster event — and since DeFoe lives in the area, he probably knows as much about the fisheries as anyone. But even he couldn’t say exactly what changed the fishing so dramatically from what he had come to expect in practice.

“Coming in, I felt like both of my patterns would hold up all week,” DeFoe said. “I don’t know if the fishing pressure got to the one that didn’t work for me today or if it was the fact that the water level came up some.

“If I had to guess, I would say the water level coming up probably caused the fish to scatter out in some places.” As the first-round leader, DeFoe receives the GEICO Everyday Leader Award of $2,500.

Hawk — an Arizona angler who finished second in last year’s Bassmaster Rookie of the Year standings — said he spent all day fishing shallow structure with an unspecified red crankbait. He said his solid weight of 17-11 didn’t come as a huge surprise.

“After what I saw in practice, I felt like you could have a day like today,” Hawk said. “Two things made me believe that. One, I have a lot of confidence in the bait I’m throwing right now and two, the mapping I’m using is fantastic here.”

Hawk said a new C-Map of the fishery from Lowrance allowed him to highlight the shallow areas and follow them exactly.

“I have the shallow water marked red, and I’m using a red crankbait,” he said. “So you just connect the red with the red and let her roll.”

Pirch said he had to make a quick adjustment Friday morning after rains Thursday night muddied the water he had planned to fish.

“I was going to gin-clear water, and when I showed up it was chocolate brown,” he said. “So I had to do things differently than I expected. But it still worked out.”

Pirch wouldn’t disclose the bait he was using — or even which one of the two lakes he was fishing. He only said he didn’t let the muddier water scare him away.

“I didn’t know if the color of the water would make a difference,” Pirch said. “I’ve caught them in practice this week in the chocolatey-brown water, but I went there to do something totally different.

“Fortunately, they were still there.”

The Bassmaster Classic Outdoors Expo presented by DICK’S Sporting is also underway this week at the Knoxville Convention Center and the adjacent World’s Fair Exhibition Hall. The Expo will be open Saturday from 10 a.m. to 6 p.m. and Sunday from 10 a.m. to 4 p.m.

Sunday’s weigh-in will culminate with the crowning of a new world champion and the awarding of the $300,000 first-place prize. Total purse for the 52 anglers is $1 million.