Inside Gerald Swindle’s museum-like man cave sit two Bassmaster Angler of the Year trophies below a wall full of whitetail deer mounts, and he’ll be quick to tell you there is tremendous connectivity between his profound success as a pro angler and the many days he’s spent sitting in a treestand. 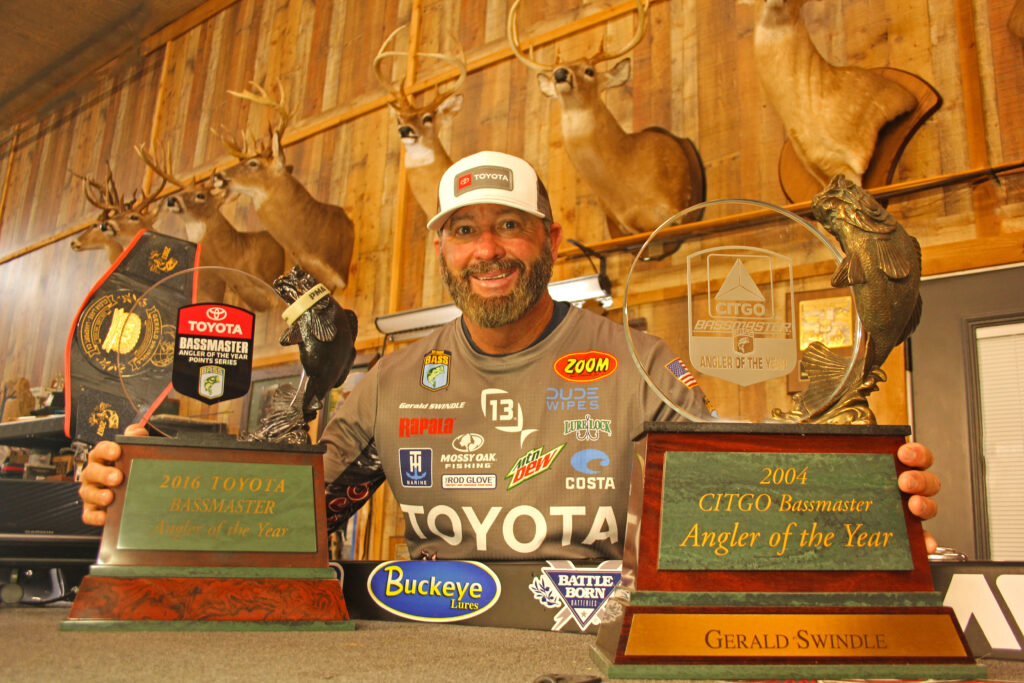 “You look back through the history of pro fishing at the dudes I looked up to – guys like Denny Brauer, Larry Nixon, and Ken Cook – and they were naturals as archery hunters too. You can’t tell me there’s not a connection there,” Swindle emphasizes. “You see the same qualities these days in Greg Hackney and Jason Christie – two of the absolute best pros in the business who are equally as wicked in the whitetail woods,” he adds.

So, what exactly is the connection between consistently successful whitetail hunters who are also the world’s top bass anglers? Swindle says there are several reasons, and he graciously highlighted those at the top of his list.

It’s been said many times the most important tool in your tacklebox is confidence, and Swindle says the affirmation a successful deer hunt yields does wonders for his confidence as an angler.

“Picking the perfect tree to put a stand in and choosing the key spot to pitch a jig among 50 acres of flooded timber on Lake Fork, ain’t much different from one another,” he says. “You’re tasked with scouting and analyzing, and then scouting and analyzing some more. But when you finally kill a big buck under that one tree you chose to hang a stand in, your confidence in your ability to analyze the outdoor world around you skyrockets!”

Few professions involve more stress and emotional roller coaster rides than professional bass fishing. So, Swindle declares deer hunting in the ‘off season’ as the ultimate source of mental therapy and stress decompression amid his efforts to recharge for the season ahead.

“My wife “Lulu” asks me why I put my treestand so high in the tree, and I just smile and tell her it makes me feel a little closer to God,” he says.

Call it meditation, stress relief, religion, or mental therapy, Swindle says everybody needs a little time in their life to be alone and unwind – and nothing supplies that better for him than time in a tree.

Whitetail teach you how to lose, and persevere

“Winning a tournament rarely happens to even the worlds’ greatest, and deer hunting will dang sure break your heart more times than not too – so both teach you to lose a lot without giving up,” says Swindle. “Lulu told me missing two bucks in seven days this season about broke her. I told her she oughta try winning an AOY title only to turn around and zero in the Bassmaster Classic,” he says.

The good news is, much like her 2-time Bassmaster Angler of the Year of husband, “Lulu” proved herself to be a pro in perseverance a few days later when she arrowed a very impressive 10-pointer to taste victory in the shadows of her previous brokenness — perfectly exemplifying the parallels between tournament bass fishing and chasing trophy whitetails.