Iaconelli is Never Without a Tackle Bag

Editor’s note: This is the latest installment of a new series themed “Two from the Tundra” – in which the author asks a Toyota Tundra driving pro angler to pick one special possession, and one special piece of tackle to share with fans. 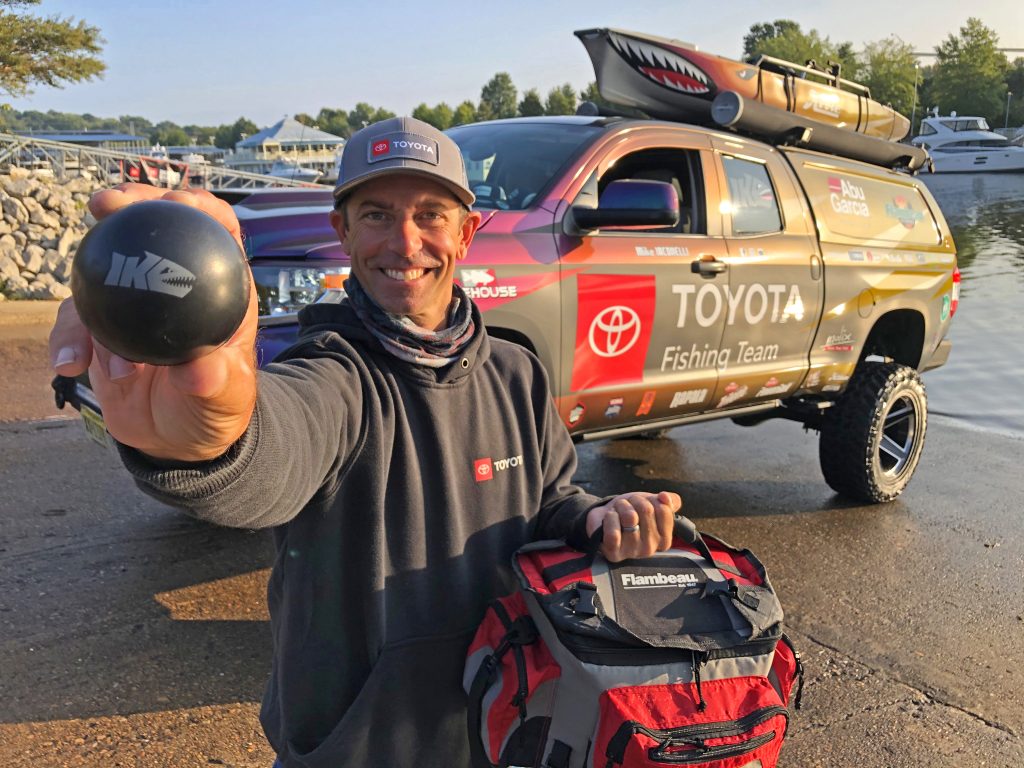 If you’ve ever thought the outrageous exuberance you’ve witnessed Team Toyota’s Mike Iaconelli exhibit is some sort of made-for-TV stunt — you’d be wrong. The dude is an all-natural bucket of fishing passion, and he’d be the first to tell you his filter is full of holes.

Hence, it makes perfect sense when “Ike” was asked to pick one special piece of fishing tackle and one unique personal item from his Tundra – both were a reflection of his passion for fishing and the raw emotion with which he does life.

Small portable Flambeau tackle bag: “I try my best to fish every single day. And it doesn’t always involve a boat. There are a lot of times when a fast trip from the shoreline is all a busy day affords. So one rod and this little Flambeau bag keep things simple and still give me the chance to catch a fish or two each day, no matter where I am,” says Iaconelli.

“Two weeks ago, we took a short family trip to the beach and I took this bag along to catch striped bass from the beach at sunrise. At the Toyota Bonus Bucks event on Pickwick, I took it up to the tailraces by a dam above where our 400 guest teams were competing downriver and caught 20+ pounds of smallmouth from the shore. From Pickwick, I took it to Table Rock for a Lowrance media outing – just in case I got some free time to fish,” he recounts.

The bag holds four to five small trays. Iaconelli lets the species he’s targeting, and the water column dictate what he packs. “For bass fishing, I start with surface lures like a Rapala Skitter V, then add some soft jerkbaits for subsurface, Rapala DT4 and DT6s for a little deeper, and finally some Missile Jigs for on the bottom,” he explains.

Ike stress relieving foam squeeze ball – Iaconelli will also be quick to tell you he has a great life. His best friends are the same guys he went to junior high school with, he adores his wife Becky, and 9-year-old son, Vegas is one of his most constant fishing buddies – but it’s not a life void of stress.

“The stress ball was Becky’s idea. I used to have tons of stuffed animals and trinkets on the dash, but every time I’d get mad after a bad tournament, it seemed like I’d throw one away in frustration,” laughs “Ike” in a moment of self-depreciating humor he never shies away from.

“I absolutely love what I do – but there’s tons of stress. There’s obviously stress and pressure to do well in tournaments. There’s stress related to rushing from one sponsor event to the next, often times driving hundreds of miles alone on a tight schedule. So, the Ike stress ball is always in the cab of my Tundra and it saves on taking my temper out on a stuffed animal if I have a bad tournament,” he laughs.