In Japan, what bass fishing means to an angler and to a lure manufacturer is a little different than here.

There is a stronger awareness of precisely how each and every manufacturer and model of Japanese bait measures against all others. 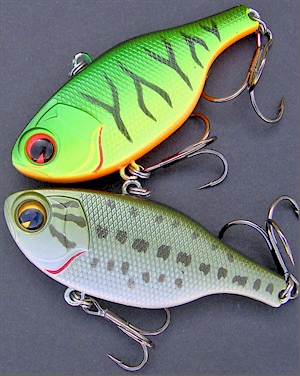 Japanese anglers are more aware and bestow more honor on their lure designers too. In the case of ima’s new Rock N Vibe, it is the creation of Japanese lure designer, Hide Iimura. The individuals who conceive each new Japanese lure design are famous for it. They’re held in high regard as true artists. After all, the goal of all art is to imitate or reflect some facet of life, and isn’t that just what a lure is? An imitation that reflects life so well, it is mistaken for it.

It is not uncommon for a devout Japanese bass angler to have a sacred kind of fishing corner in his house. It is just a small space where his rods, reels, lures, tackle bag, fishing vest or jacket, hat and other accessories are prepared and laid out in this special corner in a noble manner when he is not using them. His corner may contain photos, a lucky charm or other special fishing object like that. In this way, no matter what else goes on in his life, his fishing corner remains tranquil and always ready. One look at it brings back the many memories his fishing corner holds of fish and friends past… and it harbors his wishes of fishes yet to come in his future.

Lures, of course, are an important part of this. After all, it is only the lure that the fish dreams to bite. The fish hasn’t any interest whatsoever in the rod, reel, line, fishing vest, patches, hat, tackle bag, boat, motor, trailer, electronics or tow rig. All necessary? Surely. Yet the fish dreams of the lure alone, and the fish honors the manufacturer who made it and honors the angler who presents this lure to the fish in the manner that is fitting for the fish to bite it.

The moment when the fish is lured and played…when the hook’s hold is removed from his lip…when the man has an astonishingly fine fish in his hand. He respects it, thanks it for making the dream his reality, and returns it carefully back to its life.

That is the moment when the folks at ima hope to make all your fishing dreams come true! It’s what they work for, strive to reach for in their perfection of lures worthy of you, to make the fish of your dreams become your reality.

ima’s latest offering for you in the pursuit of your dreams is the Rock N Vibe lipless vibrating crankbait.

Before tying the Rock N Vibe on your line, cup it carefully in the palm of your hand and shake it. You’ll hear and feel a vibrancy not found in other lipless cranks. It’s almost the noise and feel of something alive in your hand, such as a cicada or other noise-making insect. 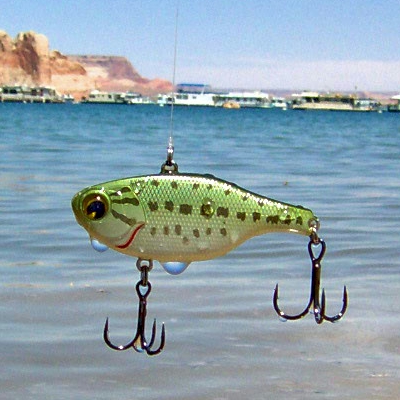 The Rock N Vibe does not make an excessively loud noise, but it is a more natural or vibrant noise than many other rattling cranks. In addition to noise, the Rock N Vibe generates a high vibration that feels like a buzz between your fingers.

Next, tie it to your rod, hook it securely onto a rod guide foot, and put that rod inside your car or truck with you on your way down to the lake. As you motor down the bumpy highway, listen to the rumbling noise made by the rapidly-vibrating Rock N Vibe on the rod in the vehicle with you. It’s more like a constant, low rumble than a rattle. More of a shivering or quivering sound all abuzz like some sort of insect or something alive.

One look at the Rock N Vibe as it nears boatside, and you’ll see that same vibrant quality in the bait’s action. One way to describe the action is to say there’s a lot of side and belly movement in the swimming behavior of the Rock N Vibe that’s not found in other lipless cranks.

The sides and belly seem to wiggle and flicker like there’s no tomorrow, and the detailed color patterns simply dance and play like alive. It has a rather realistic baitfish swimming movement and action compared to the more mechanical and artificial actions of many other lipless cranks. It’s a work of art, imitating life.

When paused, the Rock N Vibe falls straight and true. It is a true countdown lure since it won’t tangle the line as it falls. Most all lipless cranks sink, but many spin or foul the line as they do, so they’re really not useful for counting down to deeper depths. That’s the last thing you want – a lipless crank that fouls itself when it falls or is paused, ruining cast after cast. The Rock N Vibe won’t do that. It falls perfectly true when paused or on the sink, making it useful to countdown to various depths.

This doesn’t mean the Rock N Vibe will never tangle. When popped sharply on a lift-and-fall or jigged erratically using a yoyo presentation, any bait will occasionally tangle. It’s just the nature of such techniques. However, the Rock N Vibe’s ability not to tangle on a typical stop-and-go or jerk-and-pause approach is a key design feature since fish often hit on such pauses or change-ups in the action.

Feeling reckless? Try ‘worming’ the Rock N Vibe along bottom in deeper water as if you’d fish a worm or jig. Don’t flatter it by treating it in any special way. Totally disregard that you even have a lipless crankbait tied on, just hop and drop it the same way you’d work a worm or jig! The perfect, controlled sinking behavior of the Rock N Vibe is ideally suited for ‘worming’ it this way in deep water.

The fact you can worm it hits upon another valuable feature of the Rock N Vibe. You can use it at any retrieve speed. This bait can be fished at any speed from painstakingly slow to blazingly fast and all speeds in between. So whether the bass just want to lazily suck it in or aggressively chase it down, the Rock N Vibe will match the mood.

The Rock N Vibe is as much at home on medium spinning gear as on baitcasting, and it casts like a rocket on either outfit.

Give it a try and you’ll see why the pudgy little Rock N Vibe has that watchful eye and worrisome look on its face, because some big bully of a bass is constantly chasing after it! 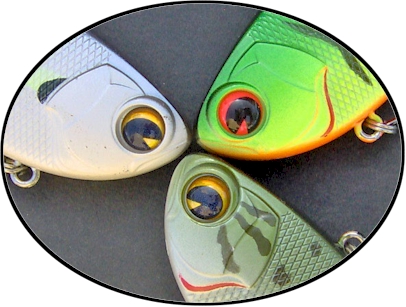