Cypress, CA (September 9, 2021) – Anyone who attended school in the last half century has owned a Trapper Keeper, or at least seen overstuffed ones clutched and carried down the corridors. They were, and still are, the valedictorian of school supply organizers. Keep that in mind while welcoming Daiwa’s new D-VEC Tackle Binder, the Trapper Keeper of fishing. 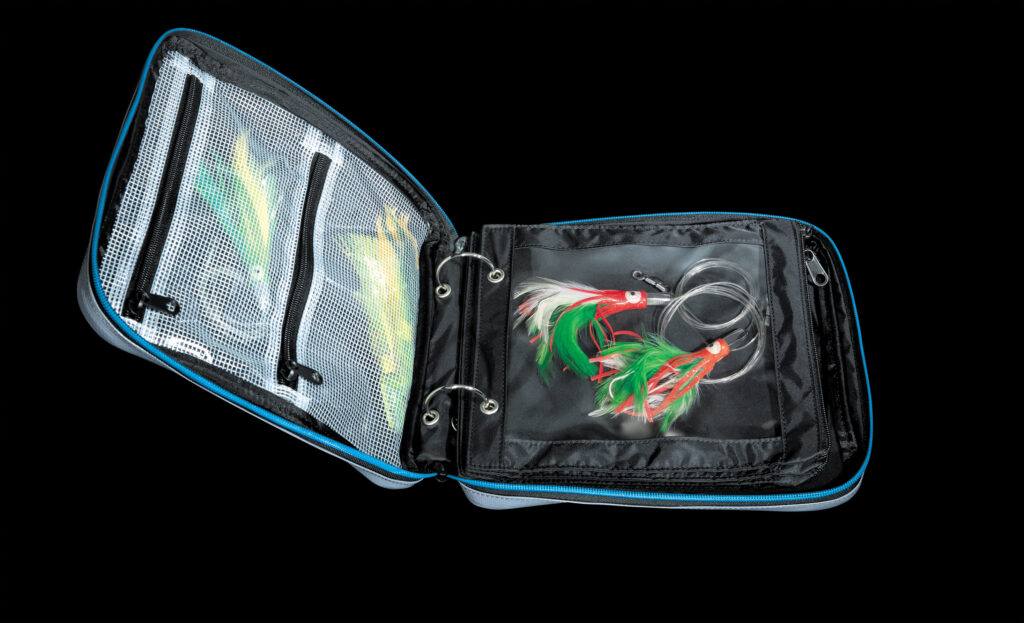 For years, these go-anywhere totes were referred to as “worm bags,” anglers stuffing them with plastics of all stripes. Since then, use has evolved to storage and quick access to everything from sinkers and hooks to jigs and even hardbaits. Troubles with run-of-the-mill worm bags abound, however. The inner sleeves fail, outer fabric doesn’t hold up and a spray of water can turn everything into a junkpile of rust.

Geared for both freshwater and saltwater use, the D-VEC Tackle Binder is constructed of marine reinforced vinyl, not the typical vulnerable fabric. The hardy vinyl is water resistant, too, not soaking up moisture, which is the catalyst for rusting baits. The exterior also features double nylon zippers that open all the way around the bottom and up both side for easy access. You’ll appreciate the zipper quality, too.

No doubt, the outer construction is brilliant, but the magic really happens on the inside. Both the Medium and Large D-VEC Tackle Binder contain five zippered sleeves secured with double rings that stay closed, only opening when you want them to. These aren’t ordinary sleeves, either. Unlike the classic Ziploc style, D-VEC Tackle Binder sleeves are constructed of transparent, pliable and tough Isinglass. It’s the same robust and flexible material used in marine windows and windshields. To that, the tops are zippered, not shoddily sealed like a sandwich bag. Such seals wear out fast. They also trap air, wasting precious space by ballooning up. Breathing D-VEC Tackle Binder sleeves maximize the amount of space available for baits and tackle. The final internal accoutrement you’ll appreciate are two open pouches for managing fishing tools.

Freshwater or Saltwater, Daiwa’s D-VEC Tackle Binder is the most complete bait tote you’ll ever use.

Daiwa’s first spinning reel rolled off the assembly line in 1955. Since then, the company has grown into one of the largest and most influential tackle companies in the world today. To handle sales and distribution in the United States, Daiwa Corporation first opened its doors on September 26, 1966, operating from a small facility in Culver City, California. Today, based in Cypress, California, Daiwa Corporation sells tackle throughout the United States, Canada, Central and South America. From the very beginning, Daiwa’s emphasis has been upon innovation and quality. The result is a long list of product features, design and materials that have become standards for the fishing tackle industry. Daiwa’s long-standing record of innovation has left a visible mark on the majority of tackle manufactured today and continues to advance the sport of fishing. Learn more at daiwa.com/us.