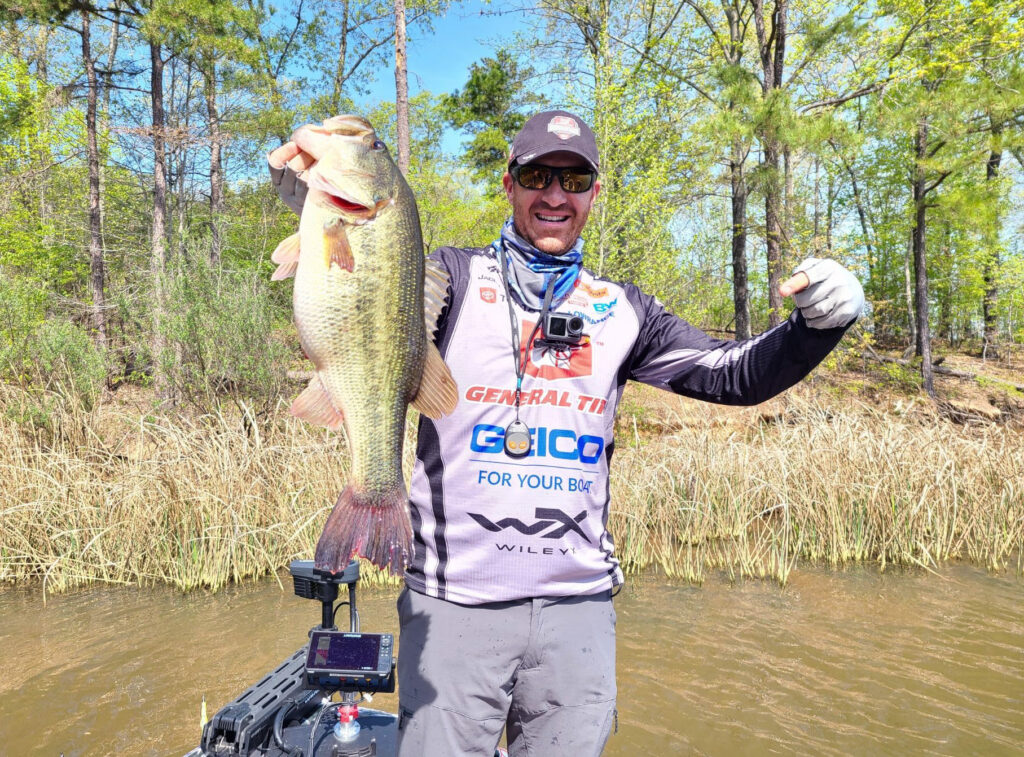 “50 g’s, heck yeah, that is unreal,” Wheeler said in his post-game interview. “That will be a fish that I remember for the rest of my life. I was cruising down the bank and when I saw that fish, I literally stopped and was like ‘Whoa, that’s a $50,000 bass.’ It took me about 45 minutes trying to figure out how to catch her, and it was pretty dang awesome when I did.”

Wheeler caught the big bass on a Googan Baits Lunker Log, although he credited a different bait as being his key for the day.

“The (Googan) Bandito Bug was the big player for me today and I caught several of my fish doing that,” Wheeler said. “But, I also caught a couple, including the big ‘un, on the Lunker Log.

“I got really close to winning here two years ago, and I’d love to try to take home the title and get a little pay back on this lake this time around. So far, after today, it’s treating me pretty solid. Shearon Harris… I love you.” 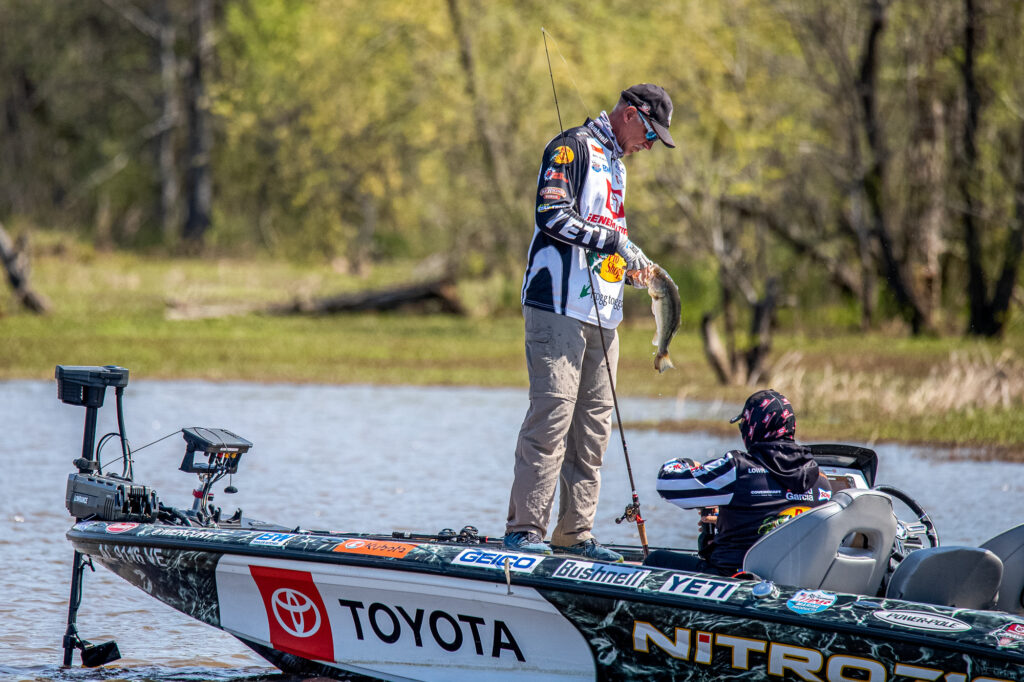 Joining Wheeler in the Championship Round will be pro Andy Morgan of Dayton, Tennessee, who won Tuesday’s Knockout Round with 15 bass weighing 46 pounds, 11 ounces.

“It was a great day for me, and well beyond my expectations,” said Morgan. “It was pretty simple fishing – just looking for spawning fish. They were up super-shallow, right around the bank. Weed clumps, trees, logs – whatever they could get around.

“I caught them on just a couple of baits,” Morgan continued. “I threw a ½-ounce Strike King Thunder Cricket with a chartreuse and white-colored Zoom Swimmer on the back. I also caught them flipping a Zoom Brush Hog and a Zoom Z-Craw . Some of the fish were actually feeding – those ones I’d catch on the Cricket. The bass that I caught flipping were primarily all spawning.”

Morgan fished the Thunder Cricket on a 7-foot, 2-inch medium-heavy Favorite Fishing Big Sexy casting rod, paired with a Lew’s 6:3:1 reel and spooled with 16-pound fluorocarbon line. For his flipping setup, he Texas-rigged the creature baits and threw them on a Favorite Fishing Pro Series The GOAT rod paired with an 8:3:1 Lew’s Flipping and Pitching reel and 20-pound fluorocarbon line.

Wednesday’s Championship Round will feature Qualifying Round winners Fletcher Shryock and Bryan Thrift, along with the top eight anglers from Tuesday’s Knockout Round, competing in a final-day shootout for the top prize of $100,000. In addition to the tournament purse, a $100,000 Big Bass Bonus will be awarded to the angler that lands the single biggest fish on the final day.

The top eight pros from the Knockout Round that advanced to Wednesday’s final-day Championship Round on Shearon Harris Reservoir are:

Eliminated from competition after the Knockout Round on Shearon Harris Reservoir are:

Overall, there were 143 bass weighing 453 pounds even caught by the 18 pros on Tuesday, which included one 7-pounder, one 6-pounders and seven 5-pounders caught from Shearon Harris Reservoir.

The 20 Anglers in Group A competed in their two-day qualifying round on Jordan Lake on Friday and Sunday – the 20 anglers in Group B on Falls Lake on Saturday and Monday. The anglers that finished in 2nd through 10th place from both groups advanced to Tuesday’s Knockout Round on Shearon Harris, while the winner of each group advanced directly to Wednesday’s Championship Round on Shearon Harris. In Wednesday’s final-day Championship Round, weights are zeroed and the highest one-day total wins.

Attendance is limited to competing anglers, essential staff and media covering the event only. Fans are encouraged to follow the event online through the MLF NOW!® live stream and SCORETRACKER® coverage at MajorLeagueFishing.com

The MLF NOW!® broadcast team of Chad McKee, Marty Stone and J.T. Kenney will break down the Championship Round action from 7:15 a.m. to 4 p.m. ET Wednesday. MLF NOW!®  will be live streamed on MajorLeagueFishing.com. and the MyOutdoorTV (MOTV) app.