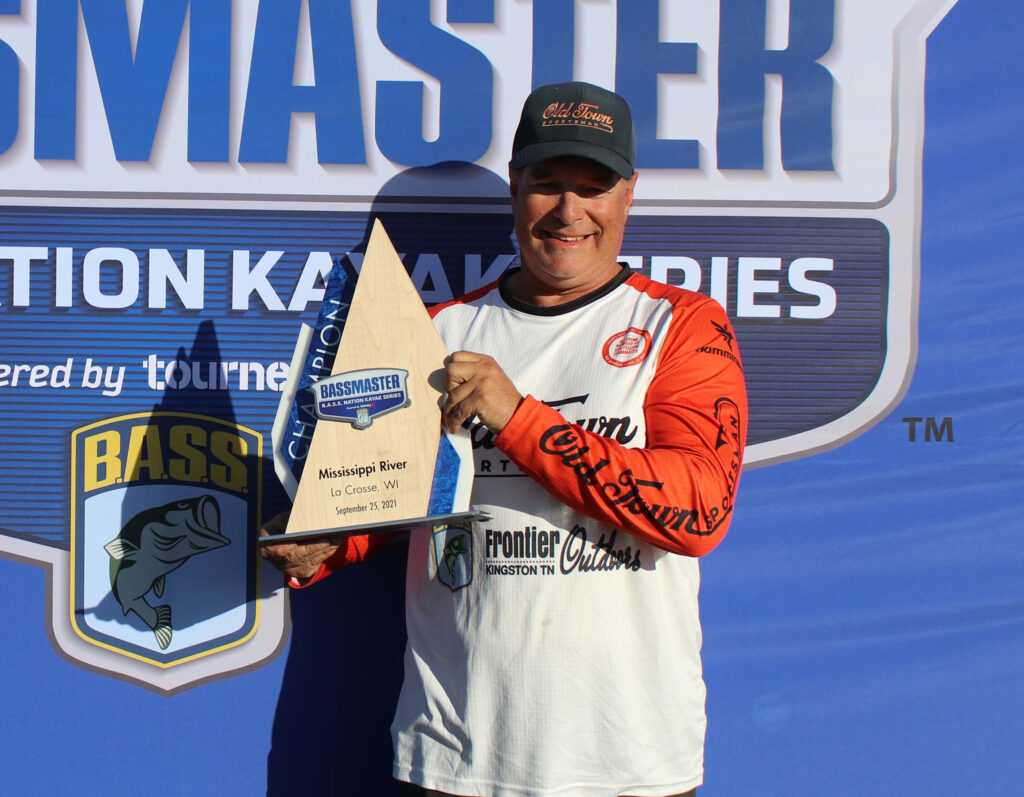 Jim Davis, of Dandridge, Tenn., has won the Bassmaster B.A.S.S. Nation Kayak Series powered by TourneyX at the Mississippi River with a five-fish limit measuring 85.5 inches. Photo by Kara Pasma/B.A.S.S.

Fishing in Pool 7, Davis made a short paddle in the morning and got off to a nice start.

“It actually started out quick with a fish that was 17.25 inches and then they got small on me,” Davis said. “There were around 30 local boats, mostly bluegill and crappie guys and it got tough — I don’t think I had another good fish until around 10 am.”

After making a bait change, the Dandridge, Tenn., angler got two more good bites with 16.25- and 17-inch bass. Once again, the small fish started biting and they were not what Davis was looking for.

“The one key was the spinnerbait color. I was using white/chartreuse all day, but I started with silver blades and changed to a bait the exact same color, but it had gold blades. That was the key to getting those two bigger bites.”

With a small limit when the leaderboard went out before 2 p.m., Davis put the spinnerbait down and made yet again another important change.

“The bite slowed, and I had noticed that nobody was fishing supershallow around me, so I picked up the Senko, rigged it weightless Texas rig and went to work around the lily pads. It was less than a foot.”

Catching his two biggest bass with less than 30 minutes left — 18.75- and 17.75-inch fish — he made a move from 19th place at 1:45 pm to the eventual victory. Davis has been fishing from a kayak for over 15 years and fishing competitively since 2015, but a shoulder surgery has put a damper on his 2021 season.

“This was my first competitive event since that shoulder reconstructive surgery, and it feels good,” he said. “I was finally able to even paddle. I tried to do a couple of other events and one I had to drop out and the other was tough — I just couldn’t do it. It feels really satisfying to be out and come back. I just want to thank Old Town Kayaks and Frontier Outdoors for the help.”

With 84.50 inches, Anthony Winkleman took the second-place spot finishing just 1-inch behind Davis. Launching on Pool 9, Winkleman relied on bass he had located in a previous event and used that confidence to adapt to changes in his main areas.

“There was nobody at the launch I used, and I saw one guy (on the water) but he came in from another ramp,” Winkleman said. “I was confident in the stuff I had but I didn’t know I would do this well. I had a slow start to the morning throwing a swimbait and was catching a lot of little fish.”

When he was forced to make a move, the Paducah, Ky., angler paddled down the bank further to flip timber but noticed some bass busting bait close by.

“My first fish when I picked up that Spook was a 16.5-inch and then I had a really good smallmouth blow it up and miss it. There was lots of floating debris and it made it hard to throw the Spook or the swimbait.”

Utilizing Spot-Lock, Winkleman was able to take advantage of schooling bass in small areas 3 to 4 feet deep where main-river current from three sides was pushing in. After catching more than 30 bass without moving and tossing back several fish over 15 inches, it was a decision to fish an area from practice that helped him later in the day.

“In practice we had a wind that pushed debris around and it made it hard to fish,” he said. “I noticed the wind had changed slightly, and I went to that spot and threw that Spook in — and on back-to-back casts, I caught two 17-inch fish. The next cast I doubled up with a 17-inch and 12-inch fish. Then right after doubled again with a 16.5- and 15-inch.

Sticking it out until almost the end, Winkleman was met with stronger currents than expected and had to work hard to get back to get his fish entered in time with a spotty cell phone signal.

“I literally got back, jumped out in 4 feet of water and almost didn’t make it in time,” he said. “That current was tough. I threw the rods in the truck, loaded the kayak on the trailer and hauled to get signal to submit my fish. It was crazy.”

Todd Martens rounded out the Top 3 with 83.75 inches. Spending his day in an area where he’d found a school of smallmouth during the recent TNT Fireworks B.A.S.S. Nation Northern Regional, he was able to do his damage on a current seam near the bottom of Pool 8.

“I checked that area this week and they were still there,” he said. “I started on them, and first thing stuck three fish in the 18- to 19-inch range and somehow managed to lose them all — I thought my event was over.”

Throwing a Rapala DT-4 in a perch color, the Rockton, Ill., angler backed off, took a breather, regrouped and was able to get to work.

“I got back up there, and it was like every third cast until 11 a.m., then it shut off. The ones I lost were footballs, the same as the 18-inch fish I ended up measuring and it was a close one, losing by less than 2 inches total.”

When the bite died, Martens worked over a shallow pattern with 2K Jigs and Get Bit Baits soft plastics but was unable to upgrade his smallmouth.

The top nine anglers from the event punched their tickets to the 2022 Kayak Series National Championship, which will be held in conjunction with the 2022 Academy Sports + Outdoors Bassmaster Classic presented by Huk at Lake Hartwell.