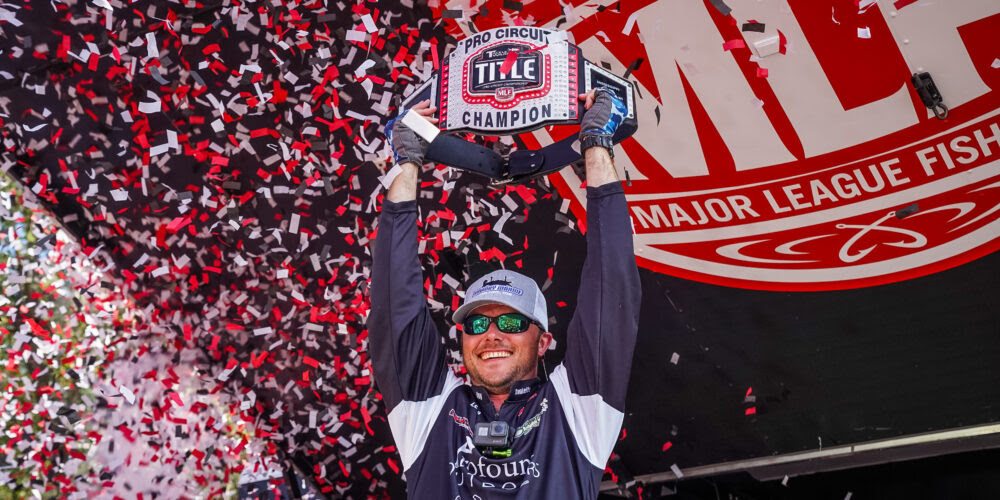 Sunday’s final day of competition marked the finale of the six-day Tackle Warehouse TITLE, which featured the top 48 pros in the 2021 Pro Circuit standings, along with last year’s reigning TITLE champion and reigning Angler of the Year – all competing for a purse of nearly $900,000.

Washam said he began fishing MLF tournaments in the Phoenix Bass Fishing League in 2012, before moving up to the Toyota Series in 2017. He qualified for the Tackle Warehouse Pro Circuit Presented by Bad Boy Mowers through the Toyota Series Central Division in 2019 and has made TITLE appearances in both ’20 and ’21. When he’s not fishing, Washam is a deputy sheriff sergeant in Tennessee

“All the glory goes to God,” Washam said of the win. “This is so amazing, but it’s His work above, I promise you. Five years ago, I bought my first fiberglass boat and decided I’d fish the [Phoenix Bass Fishing League] as a boater. Now I’m standing here with a TITLE belt on my shoulder.”

Moving up through the ranks hasn’t been easy for Washam, who took a big financial risk in 2020 and again in 2021 to follow his passion.

“I’m 34 years old and I didn’t start as young as I wish I would have, but I had to earn a living and work, so it was a slow progression to step up to this level,” said Washam. “After last year I knew that I could hang, and this year has been an absolutely incredible year. It’s humbling to know the group of anglers I just joined.”

Washam said he was contemplating going back to the Black River on the final day, having found a few places where he could pull up and catch a limit in a few casts, but he decided to make a change.

“I got to thinking, it’s Sunday and there are a lot of guys out fishing,” said Washam. “I’ve got a place that likely has the winning bag on it. Why in the world would I not go there first? Literally, as I pulled up, there was a guy in a Jon boat that was slinging a topwater and he was only half a cast away from my fish. I don’t think he knew what was there, but he was really close to finding out.

“He was a total class act,” Washam continued. “I pulled up and said, ‘Good morning.’ Of course, I was going to ask him as politely as I could if he minded giving me a little space for a couple hours, but I didn’t even have to ask. He picked up the trolling motor and left, then came back later as a spectator. Turns out he works at the sheriff’s office in La Crosse.”

Nerves didn’t seem to be a factor for Washam going into the Championship Round, even with $200,000 on the line.

“I was confident going into the final day,” said Washam. “Any time you find something like that and you’re able to leave it for Championship Sunday it’s great. But I’ve played this game long enough to know that there are so many variables. When I made the first cast and didn’t get a bite the wheels started turning. Then, when I made the second cast and caught a 3-pounder I was pumped.”

The top 10 pros at the MLF Tackle Warehouse Pro Circuit TITLE on the Mississippi River are:

Overall, there were 50 bass weighing 136 pounds, 4 ounces caught by the 10 pros on Saturday with 10 five-bass limits.

The MLF Tackle Warehouse TITLE Presented by Mercury – the Pro Circuit Championship, Presented by Bad Boy Mowers featured a hybrid tournament format. All 50 anglers were seeded into two groups of 25 – Group A & Group B, based on points earned in 2021 qualifying events – where they competed in Qualifying Rounds over the first four days of the tournament. The top 10 anglers in each group moved on to the Knockout Round on Day 5, with zeroed weights, to compete for the chance to fish on the final day. The top 10 anglers from the Knockout Round then advanced to Championship Sunday, where weights were again zeroed as anglers competed for the $235,000 prize. Winners were determined by the heaviest five-bass limit of each round.