CULLMAN, Ala. (March 14, 2021) – After leading the MLF Tackle Warehouse Pro Circuit presented by Bad Boy Mowers, Covercraft Stop 2 – Lewis Smith Lake for most of the event, it’s no surprise that Berkley pro John Cox of DeBary, Florida, pulled out the win on Championship Sunday. What is surprising – and long overdue – is a win for the angler on Lewis Smith Lake in Cullman, Alabama – a fishery that has been antagonizing Cox for nearly a decade. 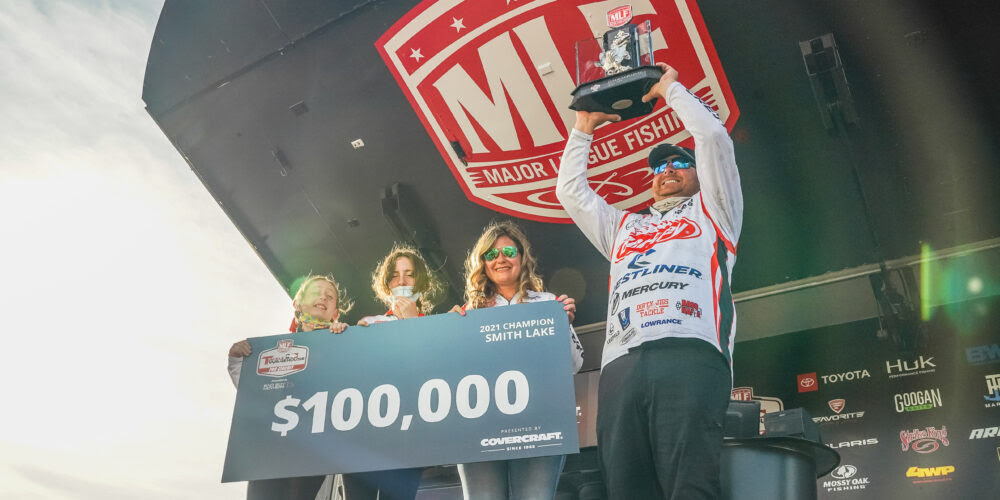 The 2016 FLW Cup Champion made the Top 10 on Lewis Smith Lake several times in the past with the Pro Circuit, including two previous runner-up finishes, but has never been able to seal the deal – until now. The win put a $100,000 check in his pocket and added another piece of hardware to his already extensive trophy collection.

Pro Spencer Shuffield of Hot Springs, Arkansas , stalked the top spot throughout Sunday, making another big leap from seventh place into second with the biggest five-bass limit of the day – 17 pounds, 8 ounces – bringing his four-day total to 56 pounds, 11 ounces. Although bites were stingy for the entire field, Cox’s five-bass limit of 16 pounds, 10 ounces gave him a four-day total of 62 pounds, 4 ounces – and a solid 5-pound, 9-ounce lead to firmly secure the win.

Cox maintained the familiar strategy seen all week throughout the final day, refusing to allow himself to do what he does best – sight-fish. Ultimately that proved to be the right call for the event, but Cox said a gut check late in the day is what sealed his victory on the northern Alabama fishery.

“I was idling to check-in when I realized I still had 7 minutes left to fish and called an audible – I was feeling sick because it felt like it just wasn’t enough [weight],” said Cox. “I knew someone was catching them. So, I pulled over to this pocket and fired my jig right down the drain. A 4-pounder came out and hit it but didn’t take it – so, I killed it for a second and she ate it.

“I knew if I had a chance to win [a tournament on Smith] something magical had to happen. That was it.”
Cox said he spent the week throwing a black-and-blue Dirty Jigs Swim Jig teamed with a  Berkley PowerBait MaxScent Meaty Chunk .

“I put the trolling motor on high and swam that jig in and around every piece of shallow cover I could find in the pockets and creeks far up Ryan Creek,” said Cox. “I threw the jig on a 7-foot, 6-inch heavy Abu Garcia Fantasista Premier rod and an  Abu Garcia Revo EXD 8:1 reel.”

Cox said that rod and reel was a difference-maker, especially when the fish surprised him and he needed to pick up the slack.

“This has been a really special week in so many ways,” said Cox. “I love this place and love fishing on Smith Lake, even despite my history – so this win is incredible.”

The MLF Tackle Warehouse Pro Circuit presented by Bad Boy Mowers, Covercraft Stop 2 – Lewis Smith Lake will feature live on-the-water coverage and a two-hour action-packed television show that will premiere on the Outdoor Channel on Sunday, July 18 from 7 to 9 a.m. ET and re-air on the Sportsman Channel this fall.

In Tackle Warehouse Pro Circuit competition, the full field of 163 anglers competed in the two-day opening round on Thursday and Friday. The field was cut to 50 anglers on Saturday. The top 10 pros based on their three-day cumulative weight advanced to Sunday where the winner was determined by the heaviest accumulated weight from all four days of competition.