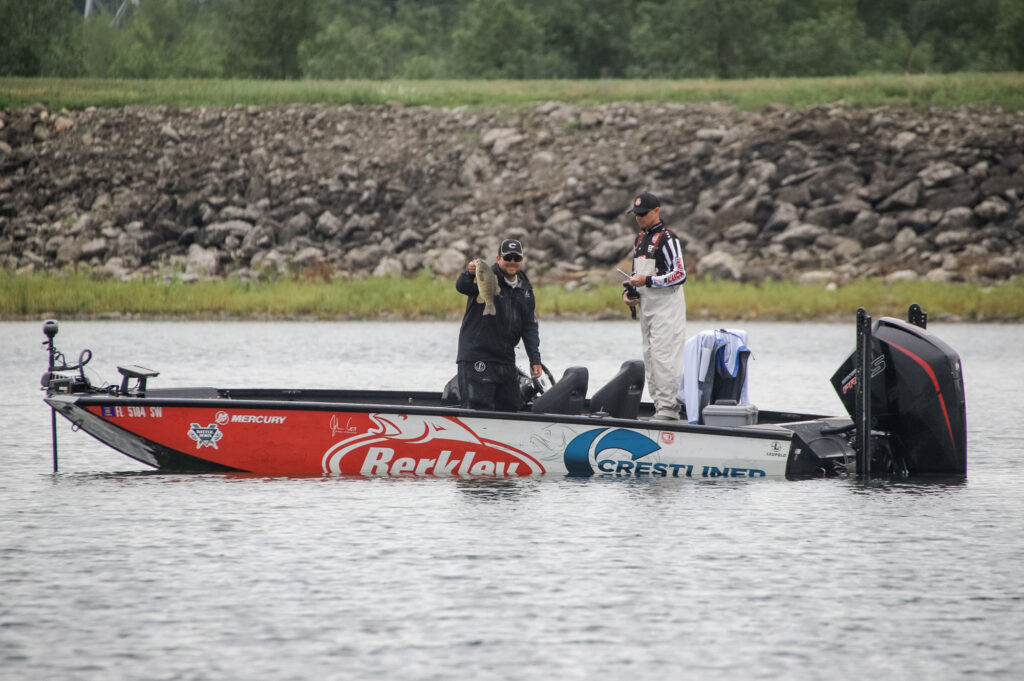 The 39 anglers in Group B will have the day off on Sunday, while the 40 anglers in Group A will complete their two-day Qualifying Round of competition. Group B will conclude their Qualifying Round on Monday. The six-day event, hosted by the Town of Massena and Fish Massena, features 80 of the top professional anglers from around the world competing for a purse of $805,000, including a top cash prize of $100,000 to the winner.

“What an awesome day. I can’t believe that I’m leading a smallmouth tournament up north,” said the Floridian Cox. “I feel like I picked up right where I left off last year. After looking at SCORETRACKER™ yesterday, I couldn’t sleep last night. And now I don’t know how I’m going to sleep tonight or tomorrow. I’m so ready to get back out there again.

Although the majority of Cox’s keepers came on the Hit Worm, he did say that he added a few key bass on the Berkley General.

“We did pull the General out for a few of them and I threw that thing around and caught some big ones too,” Cox continued. “It was just an awesome day. I moved around a lot today and sampled a lot of stuff to help get a game plan for when we come back out here Monday.

“I would love to win the Qualifying Round and be able to skip the Knockout Round and advance straight into the Championship Round,” Cox went on to say. “I know a lot of guys like being in that Knockout Round so they can follow the fish, but I feel pretty set on the areas that I’m fishing, so if I can let them rest it’ll be better.”

Connell credited a Ned rig for most of his success Saturday.

“I caught all of my fish on a Googan Baits Rattlin’ Ned,” Connell said. “This place is just unbelievable. I think I caught seven or eight 5-pounders today, maybe more. They’re biting out here, and I can’t wait to get back out here on Monday.”

“Using P-Line Tactical Fluorocarbon Line and making super long casts was the keys to my success today,” said third-place angler Thrift. “Most of my fish today came on a jig head with two types of soft plastics – the 3-inch Tennessee Shad-colored Damiki Stinger and Berkley MaxScent.

“I threw it on my signature series 7-foot medium-action Fitzgerald Drop Shot and Ned Rig rod, paired with an Abu Garcia Revo Premier Spinning Reel and spooled with 10-pound (P-Line) TCB 8 braid for my main line with 8-pound P-Line Tactical fluorocarbon leader. That setup is as good as it gets for finesse fishing,” Thrift went on to say.

The top 20 pros in Group B after Day 1 on the St. Lawrence River are: