COLUMBIA, S.C. (April 22, 2020) – A field of 161 bass fishing professionals from around the world began their four-day competition for a top award of up to $135,000 at the MLF Tackle Warehouse Pro Circuit Presented by Bad Boy Mowers, Googan Baits Stop 3 Presented by Favorite Fishing – Lake Murray Thursday in Columbia, South Carolina. 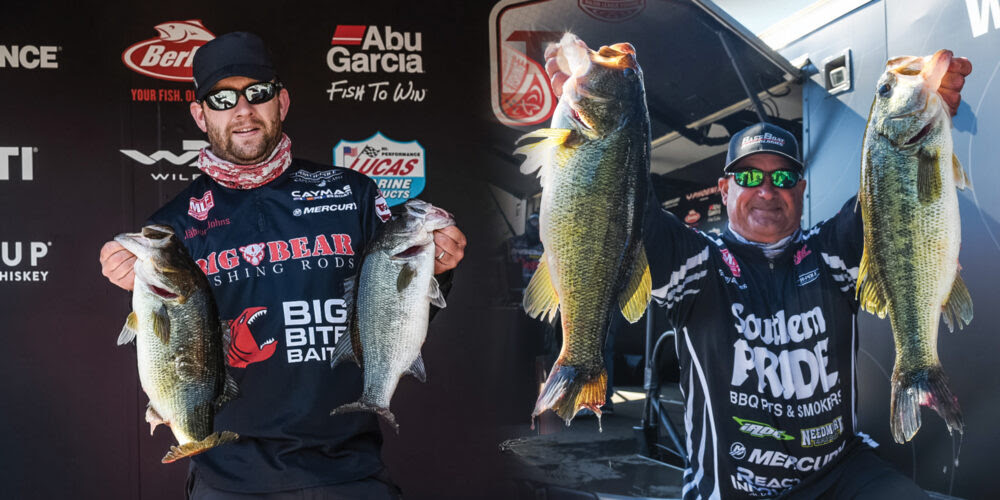 With anglers having numerous patterns available to them across the fishery, Day 1 saw pros catching fish down the lake, up the river, sight-fishing, chasing the herring spawn, throwing topwater baits and more. However, with 34-degree air temperatures making for a cold morning bite, Dickerson said he was pretty worried halfway through the day.

The Texas pro had hoped to get on a herring-spawn bite first thing, only to find no herring up shallow due to the cold. He then decided to try sight-fishing, to no avail, and found himself without a fish at 11:30 a.m.

“I was starting to get negative,” said Dickerson. “I kept thinking I’ve got to stick with what I know worked, because I was catching some big fish in practice with the herring spawn. Even if I caught two today, they could weigh 10 pounds and I’d have a chance for another day.”

The sun finally peeked out and Dickerson said it didn’t take him long to get dialed in.

“I pulled up on one place and I caught four in about 10 minutes, and one of those was over 5 pounds. After that, I knew what I was doing the rest of the day.”

Surprisingly enough, Johns had almost the exact opposite day as Dickerson.

“I spent the day blind bed-fishing, (catching) fry guarders, fished a little bit of the shad spawn and fishing bank grass. Today fit perfectly in my wheelhouse,” said Johns. “I did a little swim jigging, flipping, threw a frog and a spinnerbait – it all worked and worked right away. I figured I could catch 15 pounds easy. But when I caught a 4-pound and a 5-pound fish early, I figured I’d just go for big bites the rest of the day.”

Johns said he typically finds remote areas serve him the best, but he didn’t even go to his best area on Thursday.

“I fished the water everyone else leaves alone,” said Johns. “I fished the mud and the nastiest stuff I could because that’s what gets left alone. I went to areas I looked at on Google Earth – I knew it was going to be scary, but I knew that I could get there.’”

Those secluded areas provided Johns some very unpressured fish, making him all the more excited to get back out on the water on Friday to see what his best area may hold.

“Tomorrow is calling for clouds, and I need the sun,” said Dickerson of his herring-spawn pattern. “So, we’ll just see what happens. I may have to figure out how to get them to bite, but if the herring are still there, the bigger bass will be, too.”

Rojas won the day’s $500 Berkley Big Bass award in the pro division after bringing a largemouth weighing 6 pounds, 12 ounces to the scale.

In Tackle Warehouse Pro Circuit competition, the full field of 161 anglers compete in the two-day opening round on Thursday and Friday. The top 50 pros based on their two-day cumulative weight advance to Saturday. Only the top 10 pros continue competition on Sunday, with the winner determined by the heaviest accumulated weight from the four days of competition.

Anglers will take off at 6:30 a.m. ET Friday through Sunday from Dreher Island State Park, located at 3677 State Park Road in Prosperity. Weigh-ins will also be held at the park daily at 3 p.m. Attendance is limited to competing anglers, family, essential staff and media covering the event. Fans are encouraged to follow the action online through the MLF NOW! live stream and coverage at MajorLeagueFishing.com .

The MLF Tackle Warehouse Pro Circuit presented by Bad Boy Mowers, Googan Baits Stop 3 Presented by Favorite Fishing – Lake Murray will feature live on-the-water coverage and a two-hour action-packed television show that will premiere on the Outdoor Channel on Sunday, July 25 from 7 to 9 a.m. ET and re-air on the Sportsman Channel this fall. Weigh-ins will be streamed daily and fans can catch live on-the-water action all day Saturday and Sunday, April 24-25 on MLF NOW! beginning at 7 a.m. ET at MajorLeagueFishing.com.