CLAYTON, N.Y. — His home waters were off-limits this week, but that didn’t stop Canadian standout Chris Johnston from winning the SiteOne Bassmaster Elite at St. Lawrence River with a whopping four-day total of 20 smallmouth bass that weighed 97 pounds, 8 ounces. 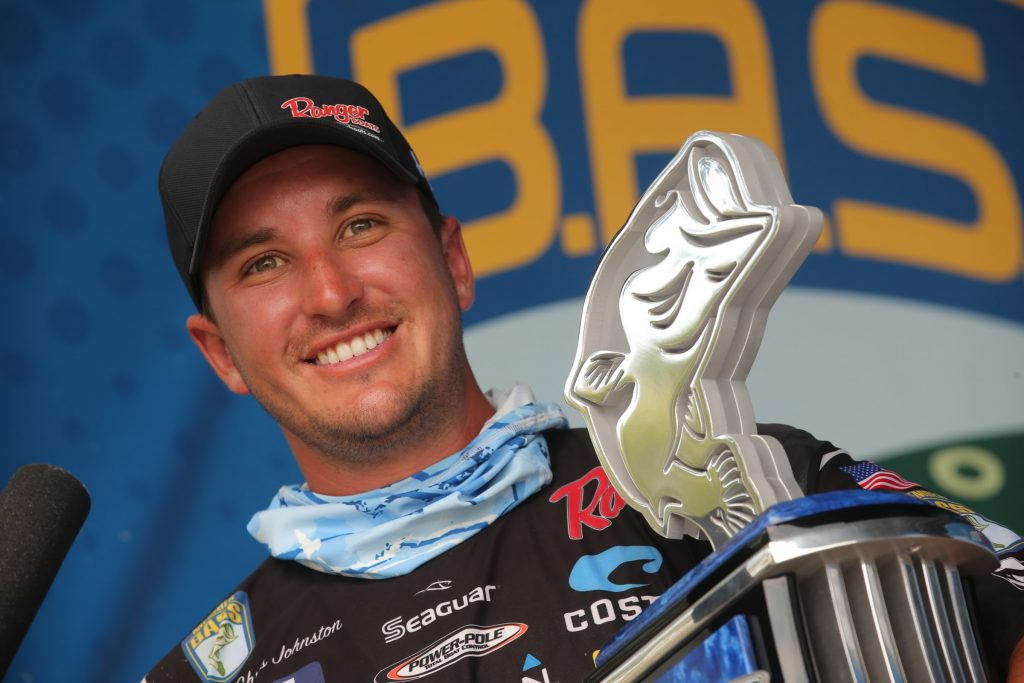 Chris Johnston, of Peterborough, Ontario, Canada, has won the 2020 SiteOne Bassmaster Elite at St. Lawrence River with a four-day total of 97 pounds, 8 ounces.

The first Canadian to claim an Elite title, Johnston was the only competitor to break 20 pounds each day. Hailing from Peterborough, Ontario, he placed second on Day 1 with 27-0 and held that position for two more days with weights of 24-12 and 23-0.

Entering Championship Sunday a little more than 2 pounds off the lead, Johnston added a final limit of 22-12 to surge ahead of Connecticut pro Paul Mueller and win by a margin of 1-10. Mueller had led the event all three days going into the final round.

“This has been a crazy year fishing-wise for me; I had two of the worst tournaments probably in my career and to bounce back and win on the St. Lawrence, of all places, is just incredible,” said Johnston, who finished 71st and 59th in the first two Elite Series events this year. “I’ve wanted a big tournament win on the St. Lawrence River bad, and it finally came together.

“I’ve watched Bassmaster my whole life and even if you’d asked me three or four years ago, I didn’t think I’d be here in this position. It’s been surreal. I can’t even describe how cool it feels.”
Throughout the week, Johnston used several baits, including a tube, a Ned rig and a black hair jig. On Sunday, he caught his fish on a drop shot with a green pumpkin Berkley Flat Worm. He needed a 3/8-ounce tungsten weight for proper presentations on Lake Ontario, where steady 6- to 8-foot waves made everything more difficult than it had been the three previous days.

The first two days saw Johnston plucking early keepers from a rocky point inside the river and then moving out to fish Lake Ontario rockpiles in 20 to 40 feet. On Saturday and Sunday, he did the majority of his work in the Great Lake.

The tournament’s first three days offered mostly calm conditions, but Sunday saw strong southwest winds which created conditions so rough that many anglers who qualified for the Championship round elected to stay in the safer confines of the St. Lawrence River. A lifetime of experience told Johnston Lake Ontario held his best opportunity to catch a winning bag, so he committed to one key area with several rockpiles in 20 to 50 feet of water along a 500-yard stretch.

“The biggest thing with the weather is just getting to your spot,” Johnston said of his safety-conscious navigation. “Once I got there, I just went upwind and drifted into the spot and then held on the spot as long as I could. Then I’d blow off the spot and do another drift.”

In 2019, Johnston experienced the inverse of this year’s finish, leading the St. Lawrence event for three days before settling for the runner-up position.

“Finishing second last year makes this win all that much sweeter,” Johnston said. “I can’t wait to get home and celebrate with family and friends.”

Mueller finished in second place with 95-14. After leading the event for three days, he found the rough waters of Lake Ontario less generous. In the Championship round, he added 18-15 to his previous weights of 27-1, 25-1 and 24-13.

He targeted rockpiles and rock breaks in 17 to 21 feet and caught all of his fish on a drop shot with a Berkley Flat Worm in the natural shad color. Uncertain of how long it would take him to run back through the rough water to the weigh-in site, Mueller left the lake around 1:45 p.m. and ended up with time to fish the river.

“Honestly, I think I feel like I left too early because I didn’t know how rough it was going to be,” Mueller said. “I felt like everything else I did today was flawless. I should have pushed it to the max, but I had no idea how long it was going to take to get back and that’s just inexperience on a body of water with that type of wind.”

Mueller’s second prize earnings came to $27,000. He will also take home $3,000 for being the highest-placing entrant in the Toyota Bonus Bucks program.

“I used a couple of different trailers so I could fish an area with one trailer and then go back through it with a different trailer. I ended up catching a few smallmouth, too, but I caught them fishing for largemouth.”

Mueller won the race for Phoenix Boats Big Bass of the week with his 7-13 smallmouth. The bass, which he described as the “fish of a lifetime,” was just 7 ounces shy of the New York state record and is believed to be the largest smallmouth ever caught in a B.A.S.S. event.

The tournament was hosted by Jefferson County in cooperation with the Village of Clayton and the 1000 Islands Clayton Chamber of Commerce.