Jordan Lee Gets a Toyota Bonus

Jordan Lee’s numbers on the final day of the Bassmaster Classic left an iconic mark on the event’s history. His monstrous 27-pound limit leveraged the biggest comeback in 47 years, and put a first-place check for $300,000 in the pocket of his Carhartt shorts. 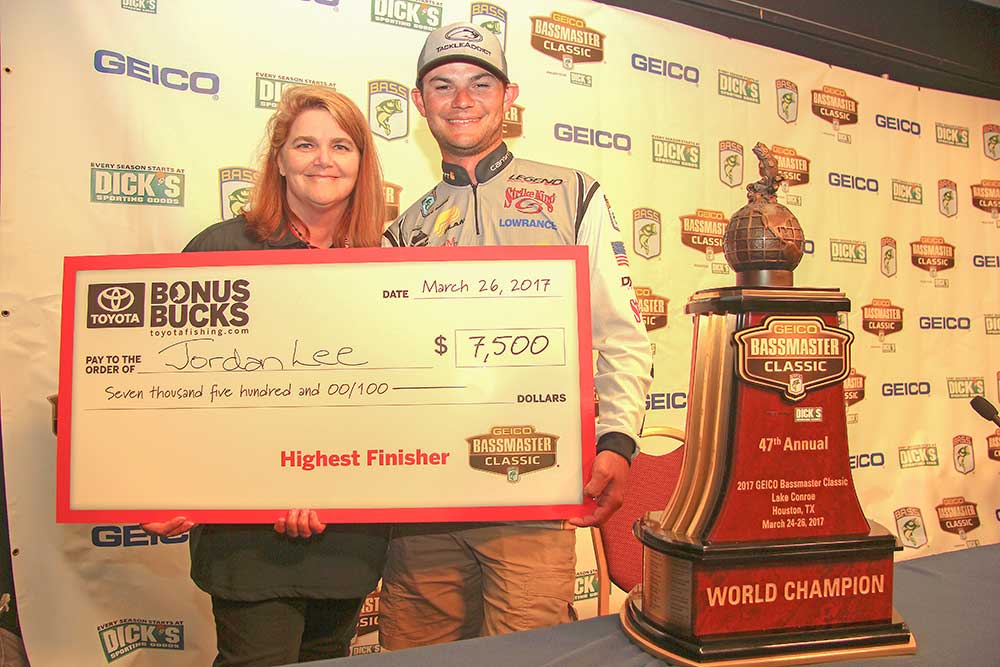 Now, add an extra $7,500 to the equation as a result of his loyalty to Toyota and their Bonus Bucks contingency program.

“The thing is, you don’t have to win the Classic, or even your local tournament, to win Bonus Bucks – you just have to be registered for free in the program, and be the highest eligible finisher in any of the tournaments Bonus Bucks is affiliated with,” explains Lee, a two-year member of the Toyota Bonus Bucks Program.

Speaking of numbers, add 38 to the mix.

“To be honest, there’s a lot of things I could tell you I love about my Toyota Tundra, including comfort and dependability – but the thing I’m digging most these days is the new 38 gallon gas tank,” says the new Classic champ.

“It’s almost like Toyota added it to the Tundra last year with tournament anglers in mind, because now I can tow for a longtime without having to pull over and fill up as often,” adds Lee.

Jordan is right about the new oversized fuel tank, and the rules of eligibility for Bonus Bucks – you don’t have to win a tournament to win the “Bonus Bucks” – you just have to be a registered participant in any of the dozens of tournaments sanctioned by Bonus Bucks, and be the highest-placing participant. In fact, some Bonus Bucks affiliated tournaments also pay the second highest eligible participant.

To get signed-up, please visit http://www.toyotatrucksbonusbucks.com/ or phone (918) 742-6424, and ask for Kendell or Jessica, and they can also help you get signed-up.