FORT WORTH, Texas — Steve Kennedy caught a five-bass limit that weighed 23 pounds Friday to take the lead during the opening round of the Academy Sports + Outdoors Bassmaster Classic presented by Huk.

And the scary thing is, he said he didn’t even get to go to the biggest bass he found in practice. 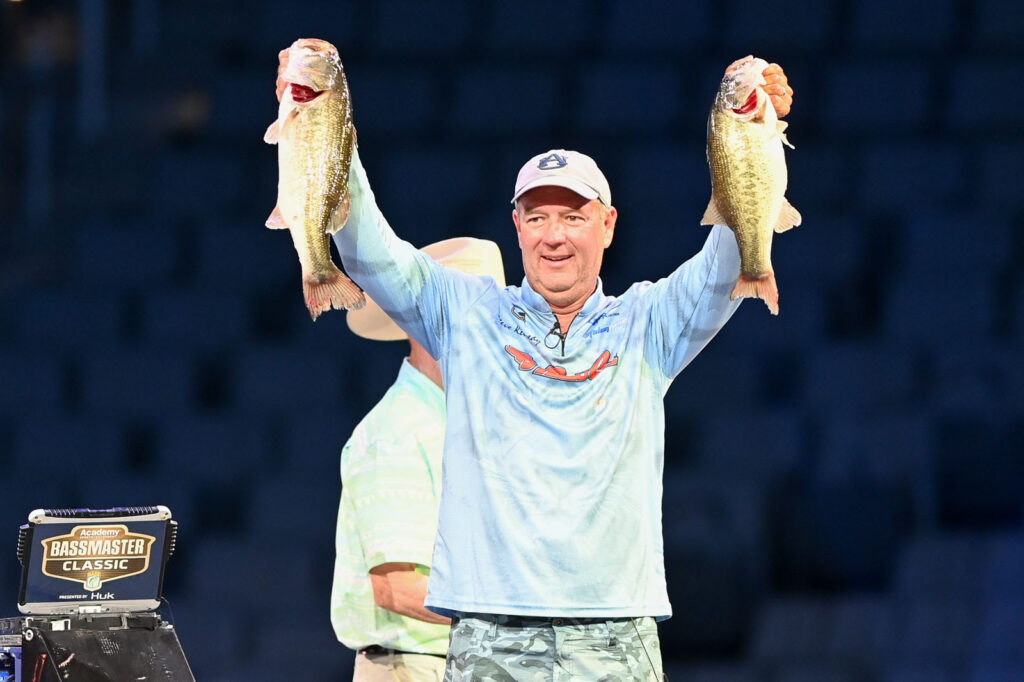 Steve Kennedy, of Auburn, Ala., is leading after Day 1 of the 2021 Academy Sports + Outdoors Bassmaster Classic presented by Huk with 23 pounds.

The Auburn, Ala., pro made the most of an early-morning shad spawn bite, putting the bulk of his limit in the livewell before 7 a.m. Then with the winds blowing hard across Lake Ray Roberts, he decided he wouldn’t be able to proceed with the second part of his game plan.

On Saturday, he hopes to exploit that morning bite again — and hopefully move on to Phase 2.

“I kind of got stuck up on one end of the lake because the wind was blowing so hard,” said Kennedy, a 10-time Classic qualifier who has finished as high as second in the event. “I didn’t go anywhere near where I was planning on fishing my second deal.

“Maybe I will tomorrow. Maybe I won’t have to. If I don’t have to show that until the final day, I sure don’t want to.”

During Kennedy’s final day of practice, he said he got 18 bites the first two hours of the morning. But those came during cloudy conditions — and since he didn’t know if there would be cloud cover Friday, he said he tried to cover water as quickly as he could.

“I was trying to condense that two hours into 30 minutes,” he said. “I was fishing a jig, and they were just eating it like crazy. The morning went just like I had hoped it would.”

After the morning bite died down, Kennedy had hoped to move to deeper water and target larger bass with big glide baits. But the weather nixed those plans.

“I was headed to my other fish and taking waves over the bow. If I had gone all the way there, I might not have been able to stand up.”

South Carolina pro Patrick Walters is right on Kennedy’s heels in second place with 22-7 — and like Kennedy, Walters found the morning conditions much more favorable.

“I was really hoping for an afternoon bite, but the wind made that nonexistent,” said Walters, who earned his first Bassmaster Elite Series victory last season on Lake Fork in Texas and finished second in another event on Fork earlier this year. “I planned to spend the entire afternoon fishing offshore, but you really couldn’t position on the fish and present your bait the way you needed to.”

That left him to rely on the early-morning bite — and, as it was for most of the field, that was short-lived.

“The shallow bite is good first thing,” Walters said. “But then about 9 o’clock, it cuts off like a light switch. I don’t know what happens, if they just move out or what. But you have until about 9, and then you have to go do something different.”

Walters — who earned Bassmaster Century Belts in both Fork events with four-day limits that weighed more than 100 pounds — did so by targeting big suspended bass in standing timber. He said Ray Roberts features a different kind of structure than Fork, but he’s counting on those same suspended fish to earn the biggest win of his career.

“You have to cover so much water out there offshore just to get a bite or two,” Walters said. “If you can’t fish efficiently, it’s just not worth it.”

But if conditions allow, Walters said the tournament could certainly be won offshore.

“I only need 15 fish to win this tournament, so those are the ones I’m looking for.”

“This was actually my worst day since I’ve been here,” said Cherry, who caught 29-3 on the first day of last year’s Classic at Lake Guntersville. “I never got comfortable today. The situation, the water color, the wind.

“I kept second-guessing myself and thinking I should be somewhere else.”

It was a midmorning revelation that finally made Cherry feel at home.

“I kind of slowed down and started kind of retracking how the morning went and noticing that I got more bites on the trees than I did in the bushes,” Cherry said. “So, I picked up a jig and kind of went back to that and started getting bit.”

Though he weighed in 20-plus pounds, Cherry said fans shouldn’t confuse Friday’s bag with the big opening-round total he weighed in last year’s event.

“This was a lot of work,” he said. “I spent a lot of time wondering what was going on, and I tried to force it. I tried to get up on some of those shallower points and really fish it, but I just wasn’t comfortable there.

“I figured out what I needed to be doing, and I’m not leaving the area I fished today.”

The full field of 54 anglers will take off again at 6:15 a.m. CT Saturday from Lake Ray Roberts State Park – Isle du Bois in Pilot Point, Texas. The weigh-in will be held at 4 p.m. CT at Dickies Arena in Fort Worth. After Saturday’s weigh-in, only the Top 25 anglers will advance to Championship Sunday with a chance at the $300,000 first-place prize.

FOX network will broadcast four hours of live coverage with tournament leaders beginning at 7 a.m., and full event coverage is available on Bassmaster.com.

The annual Bassmaster Classic Outdoors Expo will be held Saturday from 10 a.m.-6 p.m. and Sunday from 10 a.m.-4 p.m. Exhibitors are on-site selling a variety of merchandise for fishing, hunting, camping and more. As part of the Bassmaster Classic Outdoors Expo, the Go Out{side} Experience will offer fun options for families, including inflatable archery, cornhole, jumping dogs and knot tying. Kids can even catch their first fish at an on-site catfish pond.

The Bassmaster Classic is being hosted by the Fort Worth Sports Commission and Visit Fort Worth.