SCOTTSBORO, Ala. — Knowing when to shift gears rewarded Caleb Kuphall with a five-bass limit of 23 pounds, 9 ounces, which helped him extend his lead in the Berkley Bassmaster Elite at Lake Guntersville with a three-day total weight of 66 pounds, 13 ounces. 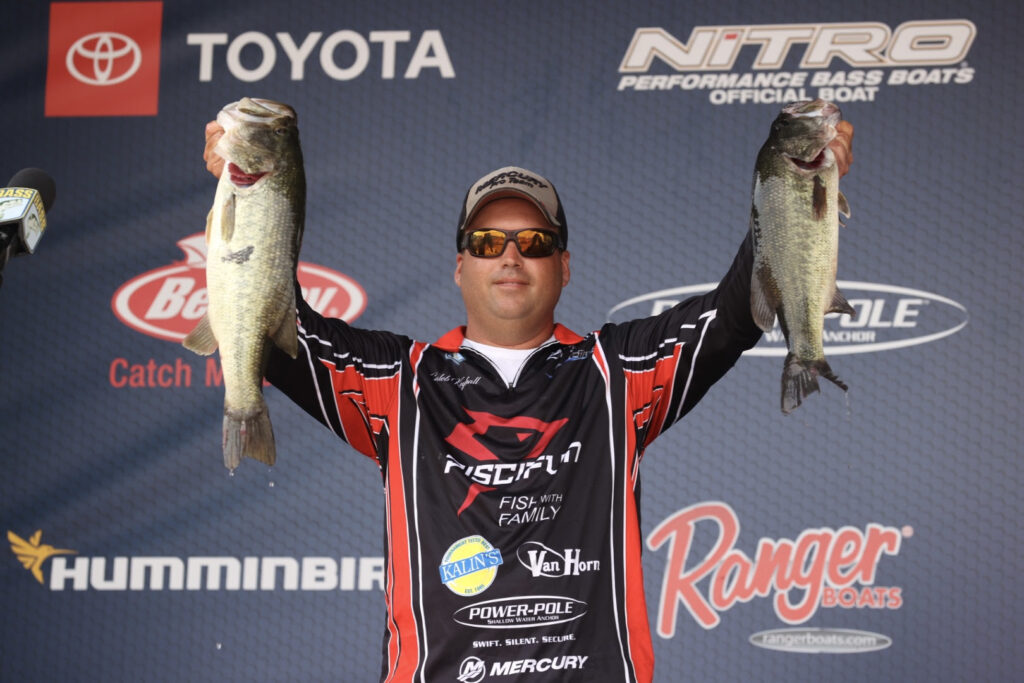 Caleb Kuphall, of Mukwonago, Wis., is leading after Day 3 of the 2021 Berkley Bassmaster Elite at Lake Guntersville with a three-day total of 66 pounds, 13 ounces.

Holding the top spot since Day 1, the pro from Mukwonago, Wis., set the pace with a first-round limit of 27-10 — the tournament’s biggest bag — and followed with 15-10. After the first two days found Kuphall with leads of 6-7 and 4-9, he enters Championship Sunday 11 1/2 pounds ahead of Alabama pro Wes Logan.

“The more the better,” Kuphall said of his numerical advantage. “If you’re going to lead, you might as well lead big, I guess. I don’t know; I’ve never been in this position before.

“It feels great to be in the lead, but I’m going to be nervous tonight.”

As he has done the past two days, Kuphall began on a large milfoil bed close to takeoff. The area yielded much of his weight on Days 1 and 2, but intense fishing pressure — from him and other anglers — has steadily decreased the area’s productivity.

Kuphall had been Texas-rigging a Zoom Z Hog in the California 420 color on a 4/0 extra-wide gap hook with a 3/4-ounce tungsten weight, but today he switched to a 1-ounce Dirty Jigs No Jack Punchin’ Jig with a forktail trailer.

“I was just trying to show them something different,” Kuphall said of his bait change. “They started taking my (Texas rig) really lightly and I was missing a couple.

“Generally, with that jig, if they get it, you’re gonna get them. It’s just a better hookup percentage.”

Around 9 a.m., Kuphall had four fish for approximately 10 1/2 pounds, so he pulled the plug and relocated to his secondary spot — a large milfoil bed near the B.B. Comer Bridge (State Route 35). Expansive cover with lots of sunfish and big gizzard shad presented a promising scenario.

Within 30 minutes of arriving, Kuphall experienced a flurry that started with a 6-pounder and followed with two in the 4-pound class. Adding two more quality fish later in the day, Kuphall culled all the fish he’d caught on his starting spot.

“I knew the big fish were there,” he said. “I just got on a good stretch and conditions were just right today.

“The sun was positioning the fish in those mats and the wind was so light it wasn’t affecting my ability to fish the mats. Everything just set up perfectly to go in there and do damage.”

On Day 2, Kuphall found the stronger wind was compacting the mats and making presentations more difficult. Also, he had to use higher trolling motor power, which likely spooked the fish. Today’s conditions allowed him to leisurely work isolated grass clumps on the mat’s perimeter.

“I was looking for the thickest stuff available; the thicker the better,” Kuphall said. “You’d flip in there and they’d destroy the bait as soon as it gets through.

“I was using a Z Hog with an ounce weight. I try to go as light as possible because I miss a lot of fish if you go too heavy on the weight.”

Looking ahead to Championship Sunday, Kuphall said he’ll give his first spot a chance to produce, but unless he finds a big bite, he’ll transition to his spot near the B.B. Comer Bridge much earlier.

“By the way my first area’s going, I’m thinking I’m going to spend a lot of time in (the second spot) tomorrow,” he said.

Hailing from Springville, Ala., Logan bolstered his first two limits of 14-1 and 20-12 with a third-round bag of 20-8 and tallied 55-5. Fresh off his win at the Whataburger Bassmaster Elite at Neely Henry Lake, Logan caught all of his bass by flipping milfoil mats in the same general area where Kuphall spent most of his day.

“There’s so much floating eelgrass that it’ll get blown into a milfoil mat and make a canopy that they’ll get under,” Logan said. “I’m flipping three or four different baits and a couple of them have different actions. I’m in really thick cover, I threw a beaver-style bait and in the open stuff, I’m flipping a Zoom Z Craw.”

Logan said he’s optimistic about Championship Sunday because, in addition to his mat pattern, he noticed an increase in shoreline activity — big bass staking out bream beds.

“I saw a lot of fish this afternoon that weren’t there this morning or yesterday,” Logan said. “They may be flooding offshore, but there’s a lot of them that aren’t leaving the bank.”

Johnston started his day targeting an offshore hard spot in about 10 feet where he caught fish on a drop shot with a Roboworm in the morning dawn color. He returned to the pad field that yielded a couple of big bites on a Spro Popping Frog on Day 2, but could not get that pattern going.

“My starting spot has gotten a lot of pressure and I just didn’t get the big ones to bite today,” Johnston said. “There’s tons of fish there; you can see them (on the graph), but it’s very tough to get bites now.”

After his frog pattern fizzled, Johnston tried a few different areas and ultimately caught a couple of small keepers off beds.

Caleb Sumrall of New Iberia, La., is in the lead for Phoenix Boats Big Bass honors with his 7-6 largemouth.

Seth Feider of New Market, Minn., leads the Bassmaster Angler of the Year standings with 602 points. Jason Christie of Park Hill, Okla., is second with 554, followed by Patrick Walters of Summerville, S.C., with 550, Johnston with 547 and Brandon Palaniuk of Rathdrum, Idaho, with 541.

Bryan New of Belmont, N.C., leads the Rookie of the Year standings with 457 points.

The Top 10 remaining anglers will take off at 5:30 a.m. CT on Championship Sunday from Scottsboro’s Goose Pond Colony Resort Marina. The weigh-in will be held back at Goose Pond at 2 p.m., with $100,000 going to the winner.

Live coverage of the event can be streamed on Bassmaster.com and the FOX Sports digital platforms. FS1 will also broadcast the action live with the leaders beginning at 7 a.m.

The tournament is being hosted by the City of Scottsboro.