Lake Champlain is considered a bass fisherman’s paradise by most who have had the pleasure of spending time on this beautiful fishery, but take one glance at the Scoretracker and it’s obvious Champlain is fishing tougher than usual for Major League Fishing competitors this week. 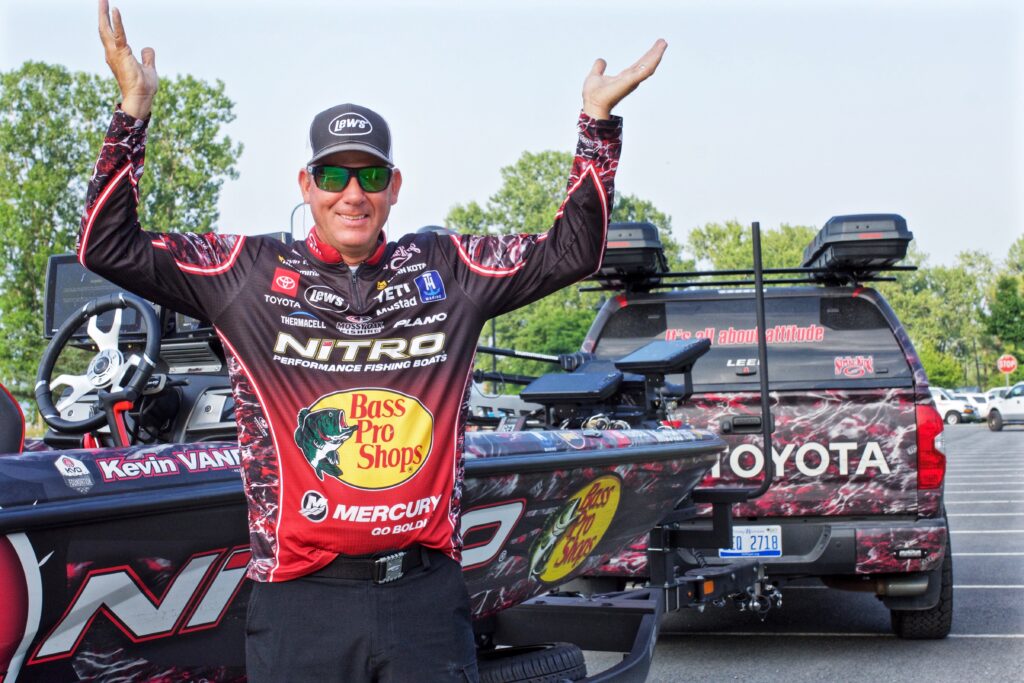 After the first two days of competition it took only 23-lbs. and 22-lbs respectively for anglers in Group A and Group B to be above the Toro Cut Line, in good position to qualify for Monday’s Knockout Round. Sure, anglers at the top of the leaderboard for Toyota Stage 6 of the Bass Pro Tour are showing out, but the weights to be inside the top 20 anglers are considerably less than what angler’s have come to expect on Champlain.

Kevin VanDam loves this lake and has a boatload of experience here throughout his career, but he’ll be the first to tell you Champlain has left him scratching his head so far this week.

“This place has an unbelievable population of bass but we’re here in the middle of the transition from shallow to postspawn,” VanDam explained. “At the end of this month most all of the smallmouth in this lake will be setup on their deep spots, but they just aren’t there right now. There fish are scattered from shallow to deep and everywhere in between.”

One of the things that makes Lake Champlain so good is the incredible diversity of cover present here. There are expansive shallow grassy bays, offshore shoals and rock piles, deep flats with defined grass lines, marina docks, rock jetties, river sections, lily pads, and the list could go on.

While this is typically a positive thing, it can also be a bit of a negative when fish aren’t grouped up in KVD’s opinion.

“It almost seems random out there right now,” VanDam admitted. “There are a few fish doing everything which makes it tough to dial in on something specific. You might catch three nice largemouth in a foot of water within 15 minutes and then go two hours without a bite. Then it’s the same deal offshore with smallies. It’s kind of strange.”

With only two days of practice on this massive body of water, it was difficult for Bass Pro Tour competitors to get dialed in on where most of the fish are spending their time right now. With both largemouth and smallmouth somewhat evenly dispersed across shallow and deep cover types, it’s easy for a few bites to mislead you.

“Even amidst the transition funk I’m still surprised with how much I struggled on day one,” VanDam said. “I had a pretty strong practice targeting smallmouth, but very seldom saw fish following when I would reel one in. Champlain is notorious for that and not seeing it tells me they aren’t grouped up quite yet.”

Two other factors that may have something to do with Champlain being stingy include the water level and the amount of fishing pressure this lake’s received in the past few weeks. Champlain’s water level is a few feet lower than usual which has left a lot of the shallow largemouth habitat unfishable.

Couple that with the fact Lake Champlain has hosted three major tournaments over the past month and it starts to make sense why this famed fishery on the New York / Vermont border isn’t producing the number of bites anglers have grown accustomed to.

Fortunately for VanDam and the rest of the field, the number and size of bass to make magic still live here, and it’s still anyone’s ballgame. The potential for 100+ pound days like Matt Lee posted on Thursday is a very real possibility. VanDam currently sits just outside the Toro Cut Line for Group B and the Team Toyota pro is looking forward to getting back on the water.

“No one is out of it at this point,” VanDam said with a wink. “This lake has the potential to produce one of those special days. If I can play the weather and execute when I get them to bite, I believe I’m around the fish to have one of those days. We’ll just have to see what happens!”