GUNTERSVILLE, Ala. (Nov. 4, 2022) – After a grueling day on the water Friday, pro Kyle Hall of Granbury, Texas, brought a five-bass limit to the stage weighing 18 pounds, 9 ounces to take the lead after Day Two of the Toyota Series Championship Presented by A.R.E. at Lake Guntersville in Guntersville, Alabama. Hall’s two-day total of 10 bass weighing 38 pounds, 9 ounces gives him a slim 5-ounce lead over pro Todd Castledine of Nacogdoches, Texas, who brought 17 pounds, 1 ounce to the scale for a two-day total of 38-4, good for second place. 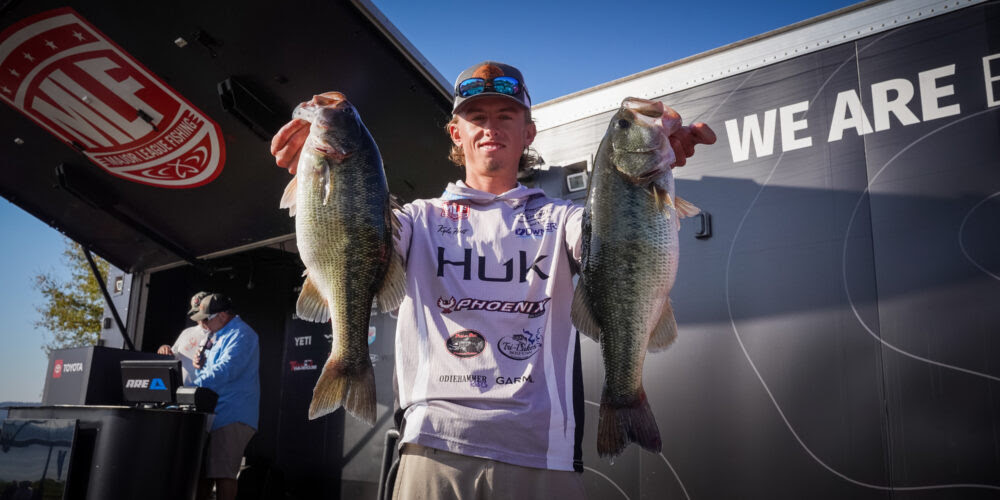 Hosted by Marshall County Tourism and Sports, the championship event features 194 pros and co-anglers from around the world, competing for a top cash award of up to $235,000. The field is now cut to just the top 10 pros and Strike King co-anglers heading into the final day of competition in the Toyota Series Championship, the culmination of the 2022 Toyota Series Presented by A.R.E. season.

“Today was a lot tougher than yesterday,” Hall said. “I caught about 40 fish yesterday and I only caught 7 or 8 today, so it slowed way down. I think they stopped pulling current off the lake, which greatly affected what the fish were doing. I expect there will be even less current being pulled tomorrow with it being the weekend.

“I spent the last two days targeting bass that were chasing bait, and I’m seeing a lot of them, but with the current changing it definitely messed with the bite.”

Hall said the fish were sitting in about 10 to 20 feet of water and he’s utilized his electronics to find every fish he’s caught.

“I took my co-angler to the bank today for about 10 minutes, but we quickly moved back out to deeper water,” Hall said. “I found the fish around lunchtime on the last day of practice and got a lot of bites quick. What I’m doing has worked for two days so far, but I don’t know if it will hold up through tomorrow.”

Hall said he’s used one bait throughout both days of the event – which he preferred not to reveal before the Championship Round – but said presentation has been key.

“Some have hit on a constant retrieve, others wanted it paused or even jerked like a jerkbait,” Hall said.

Although he’s already had a stellar season, including a Tackle Warehouse Pro Circuit win on Lake Champlain in August, Hall said he didn’t take that into consideration heading into the championship event.

“I didn’t come into this week thinking about any of the highlights from earlier in the season,” Hall said. “I just came into this event fresh, with my mind set on winning this event. After practice, I knew I had a good chance to win, but getting them in the boat has been a struggle. I’ve lost several key fish the past few days, but I’m anticipating a good day tomorrow.”

The top 10 pros that advanced to the final day of competition on Lake Guntersville are:

The top 10 Strike King co-anglers that will fish the final day on Lake Guntersville are:

The final 10 pros and Strike King co-anglers will take off Saturday at 7 a.m. CT from Guntersville Civitan Park, located at 1130 Sunset Drive, in Guntersville. Saturday’s Championship weigh-in will also be held at the park and will begin at 3 p.m. Outdoor vendors will be onsite prior to weigh-in on Saturday from 1-6 p.m. with free giveaways while supplies last. Fans can register for prize drawings for the opportunity to win a YETI Hopper Flip Cooler. The final drawing will take place Saturday following the weigh-in.

Fans are welcome to attend Saturday’s takeoff and weigh-in and also follow the action online through the “MLF Live” weigh-in broadcast and coverage at MajorLeagueFishing.com. The 2022 Toyota Series Championship Presented by A.R.E. will premiere on CBS Sports next fall.

The full field of anglers competed on Days 1 and 2 of the event, with the top 10 pros and top 10 Strike King co-anglers based on cumulative weight from the first two days continuing to the third and final day on Saturday. The 2022 Toyota Series champions will be determined by the heaviest three-day total weight.

Pros and co-anglers can qualify for multiple contingency awards based on final standings in the championship, including the lucrative $35,000 Phoenix MLF Bonus for pros. The winning Strike King co-angler will earn a new Phoenix 518 Pro bass boat with a 115-horsepower Mercury outboard motor.

The 2022 Toyota Series Presented by A.R.E. consisted of six divisions – Central, Northern, Plains, Southern, Southwestern and Western – each holding three regular-season events, along with the International division. The highest finishing pro from each division at the championship will claim a $10,000 bonus. The bonus will go to the second-highest finishing pro in the division represented by the overall champion.