EUFAULA, Ala. — Just hours before the DEWALT Bassmaster Elite at Lake Eufaula crowns its champion, volunteers spread out along the shores of Lake Eufaula to collect trash as part of the B.A.S.S. Nation Clean-Up Challenge sponsored by AFTCO and Huk. 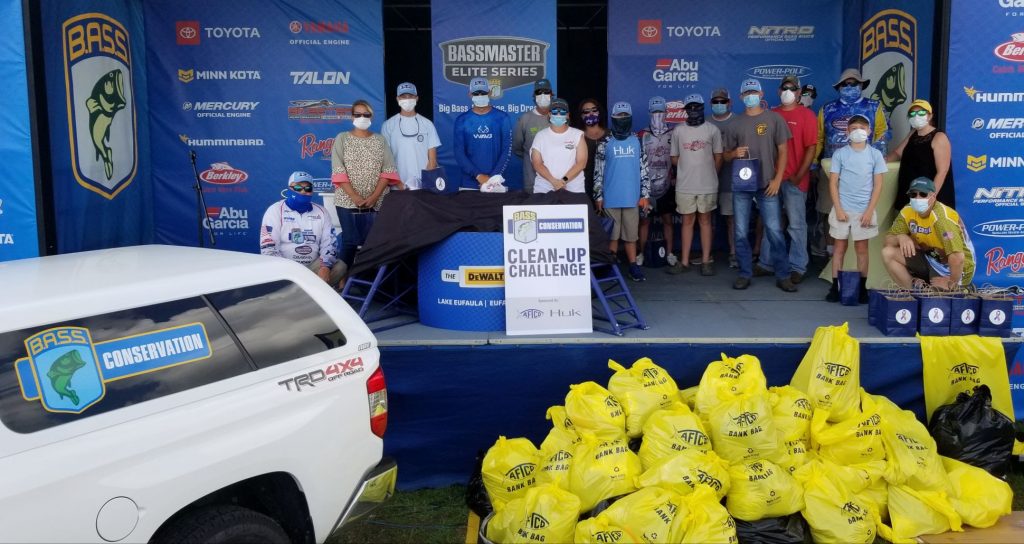 “I love this lake and fish here a lot, so I hate to see trash around the area,” said volunteer Cal Culpepper, a 2018 member of the Bassmaster High School All-American team who now fishes for the University of Montevallo. “We also want to keep tournaments coming to Eufaula, and I worry that seeing litter at the weigh-in site will deter events from coming back.”

Harris County High School parent Dawn Culpepper felt it was important to have young anglers participate in the clean up efforts. “This teaches kids that there’s more than just fishing. They have to learn about conservation and protecting the source.”

Conservation efforts are a cornerstone of the B.A.S.S. tradition, and leading efforts to collect litter can have a sizable impact on the waterways the organization and its fans frequent.

“B.A.S.S. was founded on three things: tournament fishing competition, youth participation and conservation,” B.A.S.S. Conservation Director Gene Gilliland said. “(B.A.S.S. Founder) Ray Scott used to always talk about the three-legged stool. This is one of the legs, and it doesn’t get talked about a lot.”

Bags of plastic bottles, cans, paper and plastic trash, styrofoam, umbrellas, shoes and even a water gun were collected in the clean-up effort.

“One of the things that we want to try to do is to improve the resource anytime we have a chance,” Gilliland said. “An event like this builds camaraderie between those participating. It builds goodwill with the communities that host our events.

“Most importantly, it helps us leave the venue better than we found it.”

The latest information on B.A.S.S. conservation efforts can be found on their group Facebook page or at Bassmaster.com.