MARBURY, Md.  (June 19, 2021) – Following a grueling day on the water, rookie Lawson Hibdon of Versailles, Missouri, narrowly maintained his lead on Day Three of the MLF Tackle Warehouse Pro Circuit Presented by Bad Boy Mowers, Federal Ammunition Stop 5 Presented by Lucas Oil at the Potomac River on Saturday. After weighing back-to-back 17-pound stringers the first two days of competition, Hibdon brought a five-bass limit to the scale weighing 13 pounds, 3 ounces on Saturday. His three-day total of 47-11 gives him a mere 15-ounce lead over pro Michael Neal of Dayton, Tennessee , who jumped from seventh place into second, with a five-bass limit weighing 15 pounds, 2 ounces, for a three-day total of 46-12. 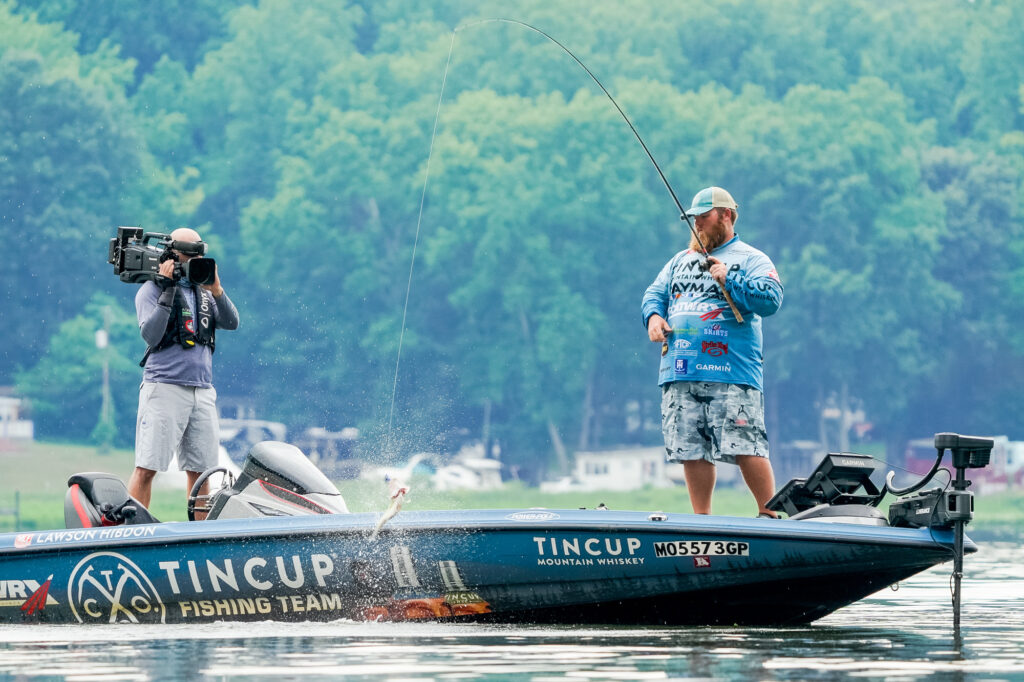 Pro Cody Meyer of Star, Idaho rounds out the top three with a total of 46-7, while fellow rookie Jacopo Gallelli of Wetumpka, Alabama, made the biggest leap from nineteenth place into sixth and into the top 10 cut.

With a live camera in his boat throughout the day, Hibdon said things felt off from the start and he struggled to find his rhythm.

“I’ve started in [Aquia Creek] every day but have left pretty quickly the first two days because I’ve had decent stringers,” said Hibdon. “Today I could never get that decent stringer going, so I left there with only about an hour left to fish. I should have made that move earlier because the tide was already changing and putting me at a disadvantage to come back up to catch a good one.

“Things just never clicked today. I don’t know what was going on, but I missed a ton of bites. They’d eat my jig trailer off or I’d hook them for just a second, then they’d come off. I don’t even know what I can do differently to fix that.”

While he missed some key fish on Day Two as well, Hibdon was able to come back with some solid bites later in the day, so his total weight and his mindset were unaffected. However, the missed opportunities on Day Three seemed to worry him a bit more.

“I lost one that was 3½ or 4 pounds and you can’t lose one like that in a tournament like this – it’ll cost you,” said Hibdon. “Hopefully, I can figure them out again because I think I was off by 30 minutes or an hour today.

“It was just a weird day. It was worse than either of the practice days I had. Once you have an off day and get in a bad roll, it just keeps on rolling. It’s a bad deal when it starts happening because your mind goes the wrong direction pretty quickly.”

Although unfamiliar with the tides, after dealing with them for several days in a row, Hibdon said he’s starting to see a pattern to when the fish are biting. While he doesn’t plan to make a change to his strategy or baits – flipping hard cover with a jig or worm and covering grass with a swimjig or vibrating jig – he does expect to settle back into the timing of the bite windows tomorrow.

Although the 26-year-old is on track to pull out the biggest win of his life, he shows no signs of stress or rattled nerves, which even with his fishing background is surprising given that a little more than three pounds separates him from the 10th place angler.

“I try to not ever get too excited, because it’s fishing and you never know what’s going to happen,” said Hibdon. “You just have to go out there and fish. That’s all I’ve done the last three days. I try not to even think about winning or the money – I’ve still got to go catch a big bag tomorrow to even think about it.

“It definitely helps mentally to have my family here this week,” said the young pro. “Being able to have them here after a rough day – that definitely helps tremendously and helps me be able to think a little more clearly.”

The top 10 pros advancing to the final day of competition Sunday on the Potomac River are: