MARBURY, Md.  (June 17, 2021) – Major League Fishing pros brought down the hammer on Day One of the MLF Tackle Warehouse Pro Circuit Presented by Bad Boy Mowers, Federal Ammunition Stop 5 Presented by Lucas Oil at the Potomac River on Thursday, with a total of 149 five-bass limits and more than 20 pros weighing in bags over 15 pounds. Rookie Lawson Hibdon of Versailles, Missouri, weighed a five-bass limit totaling 17 pounds even to grab the early lead going into Day Two of the event. Pro Zell Rowland of Montgomery, Texas, ended the day in second place – a mere ounce behind Hibdon after bringing a 16-15 limit to the scale – with pro Joey Cifuentes right on his heels with 16-14, good for third place. 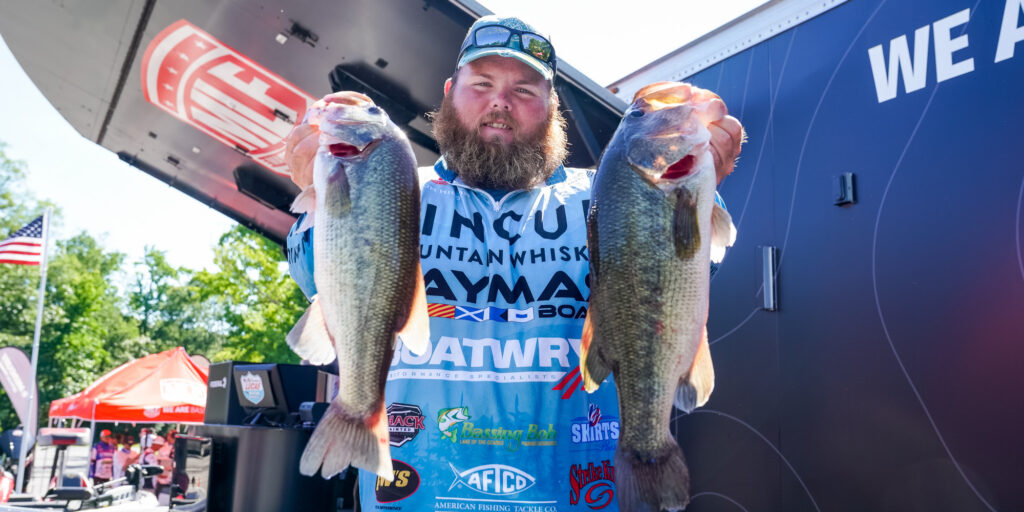 The fifth stop on the Tackle Warehouse Pro Circuit features bass fishing professionals from around the world competing for a shot to win up to $135,000 on the tidal fishery – an opportunity made even more accessible to a number of anglers after the Potomac’s stellar showing on Day One.

Although Lawson has practiced on the Potomac with his dad – legendary pro Dion Hibdon – and fished it as a co-angler three or four times in the past, he said he doesn’t have much experience on the fishery.

“I’m trying to stay away from other anglers, but still had to fish around people a time or two,” said Hibdon. “The biggest thing I had to figure out today was that I needed to slow way down. I only expected to weigh in 12 to 13 pounds like we saw a lot of other guys do, but I slowed down with a worm and caught some more quality fish this afternoon. It was very unexpected, and I wasn’t ready for it at all, but it worked out for me today.”

While anglers with more experience on tidal fisheries may plan to use the tide to their advantage, Hibdon said that’s not part of his strategy.

“I don’t know anything about how the tide works in this area and how it affects the fish or fishery,” said Hibdon. “I had 11 pounds by 9 a.m. but then I started catching some big ones. Not sure if it had anything to do with the tide, or just me slowing down, but I caught the bulk of my weight from 10 to 2 today.”

Lack of experience on the Potomac didn’t seem to hinder Hibdon, who moved around the fishery to find what worked for him; however, with mere ounces separating the top three spots, the rookie still has his work cut out for him on Day Two if he wants to stay at the top of the leaderboard.

“I hopped around a couple different creeks today and caught fish out of each creek I went to,” said Hibdon. “Two of the creeks fished better, so I’ll probably start with those two tomorrow and see if they are still in play. Hopefully I can bounce around and do the same thing tomorrow and pull some big fish.

“I probably caught more than 20 keepers today, on moving baits – spinnerbaits and ChatterBaits – before slowing down with the worm,” continued Hibdon. “I got less bites overall with the worm, but they were definitely better-quality fish.”

The top 10 pros after Day 1 on the Potomac River are:

Avena won the day’s $500 Berkley Big Bass award in the pro division after bringing a bass weighing 5 pounds, 9 ounces to the scale.

The MLF Tackle Warehouse Pro Circuit Presented by Bad Boy Mowers, Federal Ammunition Stop 5 Presented by Lucas Oil at the Potomac River is hosted by the Charles County Board of Commissioners.