RICHMOND, Va. (June 19, 2022) – After weighing in his first four fish on Sunday afternoon, Bossier City, Louisiana’s Nick LeBrun was feeling the pressure at the Toyota Stop 5 on the James River Presented by PowerStop Brakes in Richmond, Virginia. Pro Dakota Ebare of Brookeland, Texas , one of the hottest bass anglers on the planet, had just weighed in a five-bass limit totaling 16 pounds, 5 ounces and was atop the leaderboard with only LeBrun left to weigh in. LeBrun’s first four keepers weighed a total of 12 pounds, 5 ounces – his last fish had to weigh at least four pounds to have a chance at catching Ebare and earning back-to-back Tackle Warehouse Pro Circuit Presented by Fuel Me wins. 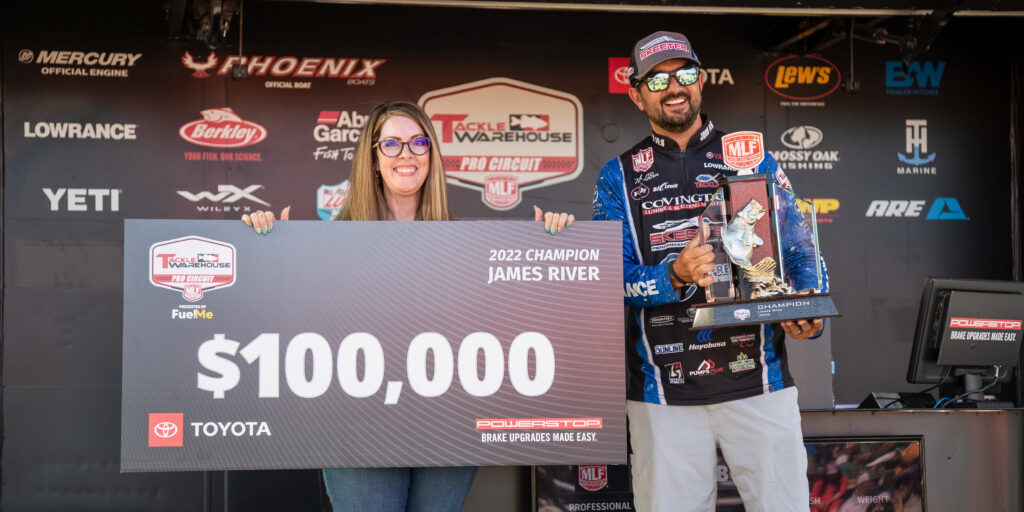 “This was the most stressful tournament I’ve ever fished,” an emotional LeBrun said on stage after learning he had won. “I was running a long way every day and put over 450 miles in this week, and the running isn’t easy. It’s treacherous, especially when you’ve never been here before. I probably ran across areas I shouldn’t have and then once you get to your area, you are constantly looking at the tide and planning your strategy and timing for each area. My brain is fried right now.”

LeBrun’s key area this week was in the Chickahominy River. He said that of the more than 81 career events he has fished, he had never relied on his Power-Poles as much as he had this week. He targeted docks and cypress trees with an unnamed bluegill-colored squarebill crankbait and a wacky-rigged 5-inch junebug-colored V&M Chopstick with a 1/0 Hayabusa WRM201 hook.

“I rotated between a few different crankbaits, but the key was changing out the stock hooks to No. 2 Hayabusa TBL930 trebles with the NRB coating,” LeBrun said. “I was deflecting the bait off the trees to get them to react, and that hook was critical to keeping them buttoned up.”

His wacky-rigged Chopstick provided a finesse alternative when the fish weren’t interested in the squarebill.

“I’d lob it in there and let it sit and then barely shake it,” LeBrun said. “The rod would load up when they’d swim off with it. That was key this week for me to get the win. I set up on the spot today, caught four small ones and then the big ones started biting it pretty good. I caught a 5-pound fish and went to the other side of the dock and caught a 4-pounder; it was a special day, today.”

With two wins and more than $200,000 in winnings in just the last four weeks, LeBrun now sits in 10th place in the Bally Bet Angler of the Year race and looks to be well in the driver’s seat to qualify for the Tackle Warehouse TITLE, the Pro Circuit Championship.

“I’ve had a blessed year,” the Louisiana pro went on to say. “To add my name to the list of anglers that have won back-to-back – those are some awesome names to be mentioned with. The James River will always be a very special place to me.”

The top 10 pros at the Tackle Warehouse Pro Circuit Toyota Stop 5 on the James River finished:

With five of six regular-season events now wrapped up in the 2022 Tackle Warehouse Pro Circuit Presented by Fuel Me season, Hayden, Alabama’s Josh Butler currently leads the Bally Bet Angler of the Year (AOY) race with 896 pounds, while reigning AOY Michael Neal of Dayton, Tennessee, sits right behind him in second place with 882 points. Berkley pro Justin Lucas of Guntersville, Alabama, and Florence, Italy’s Jacopo Gallelli are both tied for third with 863 points, while Columbus, Mississippi’s Mitch Crane rounds out the top five with 857 points.

The four-day MLF Tackle Warehouse Pro Circuit Toyota Stop 5 on the James River Presented by PowerStop Brakes was hosted by Richmond Region Tourism in cooperation with the Henrico Sports & Entertainment Authority. The event will premiere on the CBS Sports Network in early September.

In Tackle Warehouse Pro Circuit competition, the full field of 154 anglers competed in the two-day opening round on Thursday and Friday. The top 50 pros based on their two-day cumulative weight advanced to Saturday, then only the top 10 pros based on cumulative weight from the first three days continued competition on Championship Sunday, where weights were zeroed and the winner was determined by the heaviest weight from the final day of competition.

Throughout the season, anglers are also vying for valuable points in hopes of qualifying for the 2022 Tackle Warehouse Pro Circuit TITLE Presented by Mercury, the Pro Circuit Championship, where they will compete for up to $235,000. The 2022 TITLE will be on the St. Lawrence River in Massena, New York on Aug. 16-21, and is hosted by the Town of Massena.