JASPER, Ala. — Nick LeBrun has been using Lowrance Active Target for nearly a year to target crappie in deep water back in his home state of Louisiana. During that time, he has learned he often has one opportunity to make the perfect cast and lead those fish to the bait. 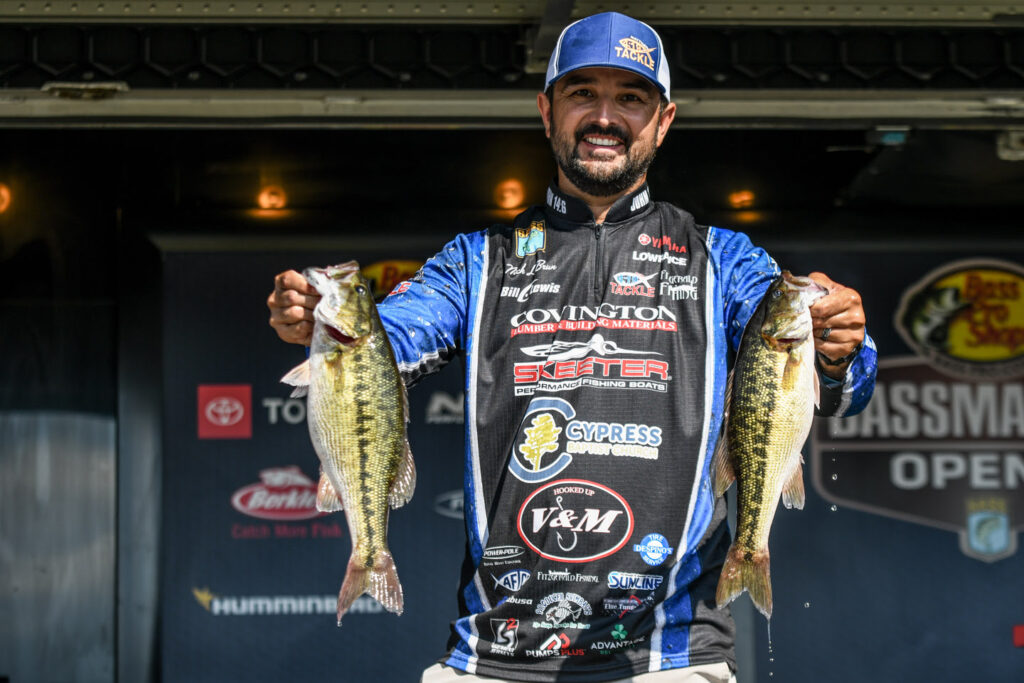 LeBrun has used that same mindset to catch quality spotted bass this week and lead both days of the 2021 Basspro.com Bassmaster Central Open at Lewis Smith Lake. He caught 12 pounds, 13 ounces Friday to increase his total weight to 27-15.

“I fished a pro circuit event here in February and had the bites to do really well and couldn’t get them in the boat and kind of stubbed my toe,” said LeBrun, a Bossier City resident. “It feels good to come back here when it is tough against so many top-notch anglers and catch them two days in a row.”

After weighing a mixed bag of 15-2 Thursday, LeBrun’s Friday bag contained all spotted bass that he saw using his Active Target units. Using a Damiki rig — a Hayabusa Ball Head jig rigged with a V&M Drop Shad — he caught all the spotted bass suspended over 50 feet of water.

The main difference between his crappie tactics and his spotted bass approach was when the bass would eat his bait.

“You have one shot to make one perfect cast and then you marry the fish and the bait on screen,” LeBrun said. “But every one I caught today, while the bait was falling 10 feet above their head, they would come up and smoke it.

“If it gets down to them, they won’t eat it. But if you can get them to come up at it, that increases your chances.”

LeBrun said the larger groups of fish were more likely to eat the bait while little packs of four or five would only look at it.

While there was a short period of fog early, sunny skies soon prevailed and LeBrun said that shut down his largemouth bite.

“The lack of cloud cover hurt me on the power fishing thing and on my largemouth tactic,” he said. “I only caught one short doing that and I know I reeled that bait on some good banks and behind some good docks. I just could never get a bite on it. The lack of clouds shut them down.”

Tom Frink of Cedartown, Ga., jumped from fourth to second with a 13-6 limit on Day 2 after securing 14-2 on the first day. With a two-day total of 27-8, he trails LeBrun by only 7 ounces heading into the final day.

With a later boat draw Friday, Frink decided to stay close to the ramp to take advantage of the morning bite and it paid off with three keepers in the first hour. From there, Frink weeded through several nonkeeper bass before filling his limit around noon.

“Thirty minutes later I caught a 2 3/4-pounder and culled a 2-pounder,” he said. “I think I caught eight keepers and around 25 fish today. This afternoon they just started biting kind of funny.”

After about 2 p.m., Frink decided to scout some new water in hopes of finding some areas that might produce on Championship Saturday.

Covering as much water as possible has been important for Frink this week. Each day he has found new water to fish as well and caught most of his weight in areas where he hadn’t previously made a cast.

Despite landing only four keepers for 10-2, Wisconsin native and two-time Bassmaster Open co-angler winner Jay Przekurat moved into third place with a two-day total of 23-5. After landing in sixth place on Day 1 with 13-3, Przekurat struggled to find bites Friday, landing his first keeper largemouth around 9:30 a.m.

“Today was way tougher. The blue-bird skies and the post-front conditions absolutely shut down the fishing,” he said. “I hardly saw any fish busting or anything. It’s not a great day and you can tell by the weights.”

Although he battled tough conditions on Day 2, Przekurat said he is excited to head back to the water Saturday for a chance to potentially win his first trophy on the boater side after a 17th-place finish at the first Central Open earlier this year at Pickwick Lake.

“Anytime you are fishing on the final day, you have a chance at a big bag,” he said. “This is my first Top 10 as a pro in my first year as a pro. This is great.”

Although he stumbled on Day 2, Brandon Ackerson still holds the Phoenix Boats Big Bass of the tournament on the boater side, a 5-15 largemouth he landed on Day 1.

Kelly Townson of Hartselle, Ala., took home the nonboater title and just over $16,000. He landed 5-0 on Day 2 to increase his two-day total to 11-13, edging out second-place Justin Stephenson by over a pound.

Townson said he used a buzzbait and a shaky head primarily on Day 1, while the shaky head was the biggest producer on the final day.

Jeffrey Jennings of Lanett, Ala., took home the Phoenix Boats Big Bass of the Tournament on the co-angler side with a 4-9 he caught on Day 2, earning $250.

With a two-day total of 23-4, Jacob Powroznik jumped into the Top 10 cut, maintaining his lead in the Falcon Rods Bassmaster Opens Angler of the Year standings with 1,368 points. Tommy Williams is second with 1,301 and Daisuke Aoki is third with 1,269.

In the Central Open standings, Przekurat jumped into the top spot with 382 points. He leads second-place Joseph Webster (381) by just one point while Brandon Lester is third with 378.

The Top 10 boaters earned a spot to compete on Championship Saturday and will takeoff from Smith Lake Public Boat Ramp starting at 6:30 a.m. CT and return for check-in at 2:30 p.m. Saturday’s weigh-in will be held at the Bass Pro Shops in Leeds, Ala., and is scheduled to start at 4 p.m. CT.

Full coverage of the event will be available at Bassmaster.com.