RICHMOND, Va. (June 18, 2022) – Fresh off the first Tackle Warehouse Pro Circuit victory of his career last month at Lake Guntersville, pro Nick LeBrun certainly has momentum on his side. After starting Saturday in 10th place, the Bossier City, Louisiana, pro brought a five-bass limit to the stage weighing 16 pounds, 6 ounces, to vault to the top of the leaderboard and lead the final 10 anglers that now advance to Championship Sunday at the Major League Fishing (MLF) Tackle Warehouse Pro Circuit Toyota Stop 5 on the James River Presented by PowerStop Brakes in Richmond, Virginia. The four-day event, hosted by Richmond Region Tourism in cooperation with the Henrico Sports & Entertainment Authority, features a field of 154 of the world’s best bass-fishing professionals competing for a total purse of more than $850,000. 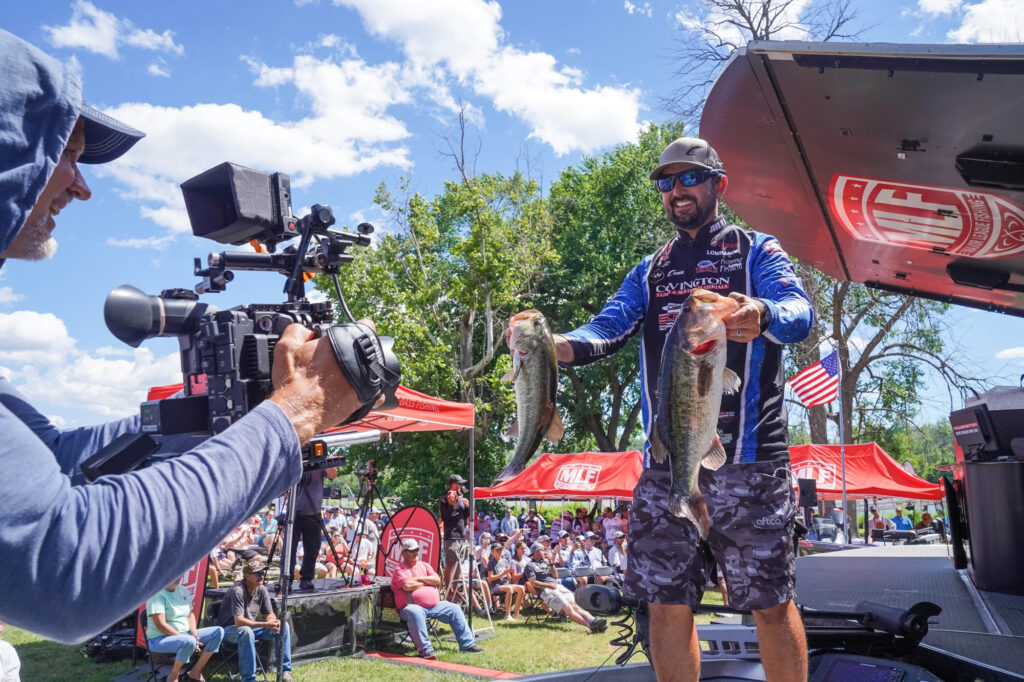 Green Lane, Pennsylvania’s Grae Buck, who led the event for the first two days of competition, struggled on Saturday and only managed to scratch up a 8-pound, 14-ounce limit. Buck narrowly missed the Championship Sunday cut, finishing the event in 11th place and earning $11,000.

The top 10 pros advancing to the final day of competition on the James River are:

Competition will resume Sunday morning with the Championship Round. Weights are zeroed, and the angler that catches the heaviest five bass will take home top prize of up to $135,000

“Today started off great,” said LeBrun, who entered this event ranked No. 24 in the Angler of the Year race and season earnings of $126,000. “I made the 45-minute run down to the Chickahominy, and there wasn’t anyone near my spot. I got in there, got set up, Power-Poled down, made one cast with a crankbait and caught a 2½- and a 3½-pounder at the same time – each fish had one of the Hayabusa TBL930 hooks – and that was a really good way to start the day.

“I’ve never caught two fish on one cast in a tournament before,” LeBrun continued. “Normally when that happens, they’re little peanuts, but those were two good fish so that was very cool.”

LeBrun said that his main area that he has been catching fish in is a current seam, throwing a V&M Chopstick. He thinks it is replenishing each day with quality, fresh “tournament” fish.

“It seems to be a hang-up spot,” LeBrun said. “I really don’t know where they’re coming from, but I think it is replenishing and when you get there at daylight, they’re fresh. But, I haven’t hit it past 10:30 (a.m.) each day. I’ve only been hitting it once or twice, and then I’ve been getting off it and trying to conserve. I’m excited to get back out there tomorrow, because I can sit there and not worry about being conservative and catch every fish that is there. I haven’t caught a 4-pounder there, yet, but there are definitely some 3-pounders there and we’re going to give it all we’ve got.”

With LeBrun’s victory last month at Lake Guntersville, LeBrun now has the opportunity to add his name to a small list of anglers that have won back-to-back events. General Tire pro Mark Rose and Phoenix, Arizona’s Brett Hite are the only two pros that have ever won back-to-back pro-level events in MLF history before.

“To go back-to-back would be mind-blowing,” the Louisiana pro went on to say. “I can’t even imagine. I think the weights might go down just a little bit, but if a guy can catch 16 to 17 pounds tomorrow, he’ll have a real good shot at it. This is such a fun place to fish, and it’s an honor to just make the top 10 with this group of guys on this tour. Tomorrow we’re going to go out and catch every single one that we can, and I’m excited to see what happens.”

Finishing in 11th through 50th are:

Complete results for the entire field can be found at MajorLeagueFishing.com.

In Tackle Warehouse Pro Circuit competition, the full field of 154 anglers competed in the two-day opening round on Thursday and Friday. Only the top 50 pros based on their two-day cumulative weight advanced to Saturday. Now, the top 10 pros based on cumulative weight from the first three days will continue competition on Championship Sunday. Weights are reset to zero, and the 10 pros will compete in a one-day shootout for the grand prize of up to $135,000, including the lucrative $35,000 Phoenix MLF Bonus for qualified anglers.

The MLF Tackle Warehouse Pro Circuit Toyota Stop 5 on the James River Presented by PowerStop Brakes marks the fifth of six regular-season Pro Circuit events in 2022.Throughout the season, anglers are also vying for valuable points in hopes of qualifying for the 2022 Tackle Warehouse Pro Circuit TITLE Presented by Mercury, the Pro Circuit Championship, where they will compete for up to $235,000. The 2022 TITLE will be on the St. Lawrence River in Massena, New York on Aug. 16-21, and is hosted by the Town of Massena.

The final 10 anglers will launch at 6:30 a.m. ET each day from the Osborne Landing, located at 9530 Osborne Turnpike in Richmond. Sunday’s Championship weigh-in will also be held at the landing beginning at 2:30 p.m. Fans are encouraged to attend the morning take off and Championship weigh-ins, and also follow the live on-the-water action all four days of competition online on MLF NOW! beginning at 7 a.m. ET at MajorLeagueFishing.com.

As part of the event, on Sunday, June 19, from Noon to 4 p.m., fans are invited out to the Major League Fishing Festival at the Osborne Landing. Hosted by Richmond Region Tourism, the event will feature fans meeting and getting autographs from their favorite pro anglers that compete on the Tackle Warehouse Pro Circuit. Children are welcome to visit the Kids Zone to meet Skye & Marshall from PAW Patrol, fish for live fish in the Kids Fishing Pond, show off their artistic skills at the coloring stations, and more. Vendor booths from MLF sponsors, food, prizes and giveaways, including a FREE Abu Garcia rod and reel combo for the first 50 high school or middle school anglers, are available to festival goers. One lucky attendee will play for a brand new 2022 Toyota Tundra in the Bully Dog Pick ‘Til You Win game, with runner up prizes of a new 70-inch 4K UHD Smart TV or a Bully Dog Performance Tuner. For more information on the Major League Fishing Festival, visit MajorLeagueFishing.com/Attend.

The MLF NOW!® broadcast team of Chad McKee, Marty Stone and J.T. Kenney will break down the extended action on Championship Sunday from 7 a.m. to 2:15 p.m. ET. MLF NOW!®  will be live streamed on MajorLeagueFishing.com and the MyOutdoorTV (MOTV) app.

The MLF Tackle Warehouse Pro Circuit Toyota Stop 5 on the James River Presented by PowerStop Brakes will feature live on-the-water coverage and a two-hour action-packed television show that will premiere on the CBS Sports Network in early September.