GROVE, Okla. — Nick LeBrun’s strategy of “go big or go home” carried him to a dominant victory in the Basspro.com Bassmaster Central Open at Grand Lake with a three-day total weight of 50 pounds, 2 ounces. 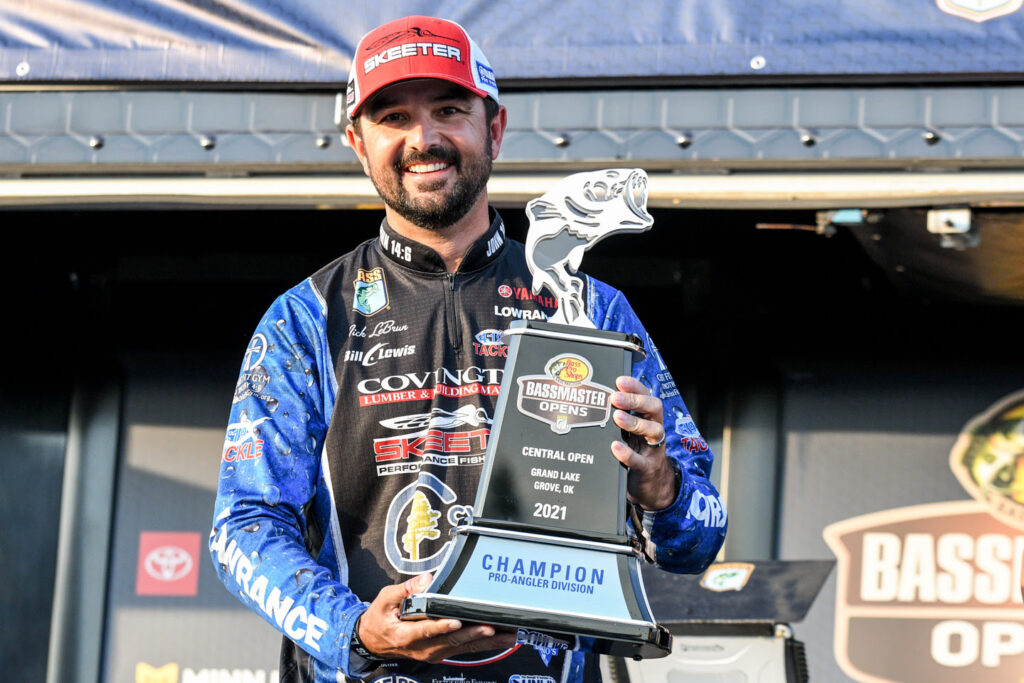 Nick LeBrun, of Bossier City, La., has won the 2021 Basspro.com Bassmaster Central Open at Grand Lake with a three-day total of 50 pounds, 2 ounces.

Hailing from Bossier City, La., LeBrun placed third on Day 1 with 17-12, then improved to second with Friday’s limit of 15-3. Championship Saturday saw him sack up the day’s heaviest catch — 17-3, which helped him edge Day 1 leader Kenta Kimura of Japan by 4-6.

Along with the top prize of $47,833, LeBrun earned a spot in the 2022 Academy Sports + Outdoors Bassmaster Classic presented by Huk, which is scheduled for March 4-6 on South Carolina’s Lake Hartwell.

“Money spends, but going to the Classic is a childhood, manhood, everything dream,” Lebrun said. “It’s going to take a while for that to sink in.”

LeBrun, who placed second at the Central Open on Alabama’s Smith Lake two weeks ago, caught all of the fish he weighed this week on a Whopper Plopper and another plopper-style bait. He started throwing the 110 size bait in practice, but windy conditions prompted him to upsize to the hefty 130, which holds its own in blustery conditions.

As it turned out, LeBrun’s big bait was a good match to the giant gizzard shad his fish were targeting. With fall bass intent on filing their bellies, many anglers were keying on the smaller and more common threadfin shad. Locating areas thick with big gizzards proved foundational to LeBrun’s success.

“Anytime you see those big gizzard shad up on the bank in this part of the country, it’s time to pick up that plopper and keep it in your hand all day,” LeBrun said. “You don’t get many bites, but the ones you get are usually big.”

All week, LeBrun stayed in the mid-lake region, between Shangri-La and Horse Creek. His ideal scenario comprised short pockets with docks. He named the waypoint for his most memorable spot “Big” because he had a 5-pounder bite his hookless practice bait. This spot would produce the kicker that sealed his win.

After a somewhat slow start, Championship Saturday suddenly took an encouraging turn when LeBrun entered the “Big” pocket and found his biggest fish of the day — a 5 3/4-pounder — around 9 a.m.

“I had one little 2-pounder in the box and was easing up to this dock at the mouth of a little pocket,” LeBrun said. “I heard the fish blow up behind me, so I turned around and cast in that direction. She came up and smoked it.

“When I landed that fish, I felt like I’d won. That doesn’t always hold true, but you have to have that winning moment. It’s not over ’til it’s over, but it certainly was an awesome feeling.”

Considering that inconsistent fall conditions had most competitors junk fishing their way through the days, LeBrun’s single-minded strategy was a legitimate oddity.

“I’m pretty overwhelmed right now,” he said. “Throwing a big bait like that in a field this size with the caliber of anglers competing, it’s very rare that something like that works out for three days.

“Normally, you have to mix it up. But the good Lord blessed me this week because every fish I weighed in was doing what I wanted to do. I felt like I was fishing to win and you can’t ask for anything better.”

Kimura placed second with 45-12. The Bassmaster Elite Series pro set the first-round mark by catching 21-14 — the event’s biggest bag. He added 11 pounds on Friday and finished with 12-14 Saturday.

“I was pretty excited about this morning because of the wind,” Kimura said. “I thought I was going to get 20 pounds, but the 4-pounders never showed up.”

“All three days, sticking with it was important because all three days I caught a big fish within the last 30 to 40 minutes. Today, I caught my two biggest fish in the last hour.”

Jacob Walker of Alabaster, Ala., won the $500 Phoenix Boats Big Bass prize with his 6-9.

As part of the Yamaha Power Pay program, LeBrun took home an additional $1,000 while John Soukup of Sapulpa, Okla., claimed an additional $500 for being the second-highest placing entrant.

Cody Huff of Ava., Mo., finished first in the Central Opens standings with 565 points. Jay Przekurat of Stevens Point, Wis., finished second with 558, followed by Jacob Powroznik of North Prince George, Va., with 546, Joseph Webster of Winfield, Ala., with 544 and John Garrett of Union City, Tenn., with 543. Huff, Przekurat and Webster earned invitations to fish the 2022 Bassmaster Elite Series while Powroznik earned an invitation to fish the Elites by winning the Falcon Rods Bassmaster Opens Angler of the Year title.

The City of Grove hosted the tournament.