This is Lee’s first year officially working with Optimum Baits and Deps, but he’s been a Deps fan for over a decade, thanks to a friendship with Bassmaster Elite Series and fellow Deps pro Kenta Kimura, who he met while fishing the Bassmaster Opens. 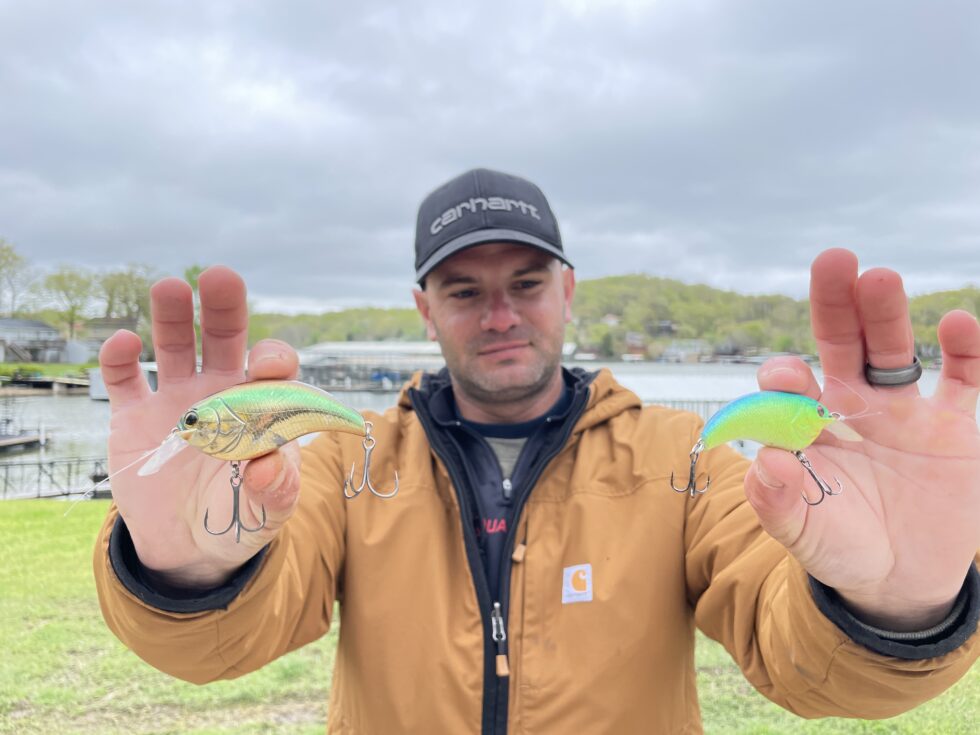 “We both fished all of the Opens back then, so we saw each other a lot and became buddies and got to talking fishing whenever we saw each other,” said Lee. “He handed me some Evoke squarebills, a 1.2 and 2.0 and told me all about the design process since he was so involved with it. The baits he gave me were bright chartreuse with a green back, so I didn’t use them everywhere, but I caught a bunch of fish on them on the muddy Red River in Louisiana and on Lake Erie for those aggressive smallmouth.”

Now, Lee has had a chance to expand his arsenal and has found more and more ways to use the entire Evoke lineup.

“I still have those baits he gave me, but I’ve been experimenting with different colors and sizes,” he said. “I’ve had an insane day around the house on the 4.0, fishing with guys fishing other baits. Throwing a bigger bait is something that not everyone is doing and it definitely has a time and place.”

The Case for Going Big

One instance when Lee reaches for big squarebills is the post-spawn and when fishing pressured waters, such as Lake Guntersville near his Alabama home.

“The fish are getting so much more pressure year after year,” said Lee. “Most anglers are throwing pretty much the same thing, the baits with the same profile and action. They don’t see a lot of giant crankbaits like the 4.0, which is almost 4-inches long, which is crazy because we’ve seen how good big swimbaits and glide baits catch fish.”

While the Evoke will dive 9 to 11-feet deep, Lee likes to fish it shallower and get it to grind and dive into the bottom to create a commotion.

“The best places for me are the 6 to 8-foot range when fish are scattered on points and flats,” he said. “You could get the 2.0 size down and tick the bottom there, but I want the bait to make contact with the bottom and drag it across those shallow areas. The bigger profile gets their attention, and I believe those big bass prefer to feed on large baitfish like gizzard shad.”

Thoughts on Color, Gear, and Selecting the Right Crankbait Size

Crankbait color selection usually varies between anglers, with some changing often and others keeping it simple, which is how Lee approaches it.

“Shad patterns are always good, especially the 3.0 and 4.0 to imitate big shad,” he said. “I like the craw patterns for the smaller baits early in the year and have had some excellent days on the red and gold metallic patterns. But, during the post-spawn and all the way into the fall, the shad patterns are the way to go for me. ”

“The numbers are the diving depth in meters, so us Americans will have to do a little math to figure it out,” Lee said. “One thing that I really like about all of them is how well they come through cover and that’s what Kenta first explained to me, they have the buoyancy of a balsa bait, so they float up after contact with laydowns and brushpiles and don’t get hung up as nearly much as other squarebills. Being plastic, they’re much more durable and they’re not going to start to chip, so they’ll last longer.”

The vast difference in weights between the Evoke 1.2 (.38oz) and 4.0 (1.99oz) requires much different gear based on the bait, but Lee keeps things as simple as possible.

“I use 12-pound Seaguar Red Label for the smaller baits, but go up to 15-pound for the 3.0 and 4.0 and go down to 10-pound when trying to get the smaller baits a little bit deeper,” he said. “My rod and reel for the four smallest baits is a 7-foot medium Quantum Accurist and a 7-foot, 4-inch medium-heavy for the big baits; they’re composite rods with a good backbone. I like to throw them on a 5.3:1 or 6.6:1 Quantum Smoke HD reel because I like the bigger spool for long casts and larger handles for fighting fish.”

When selecting between the different Evoke sizes, Lee uses the standard “match the hatch” approach and also tries to show the fish a different profile.

“The larger baits like the 3.0 and 4.0 are great for when they’re eating big baitfish, in dirty water, and when trying to show them something different,” he said. “You can burn those baits, even in ultra-clear water, because they just aren’t used to seeing baits that big go flying by them and can’t help but react. The smaller 1.2, 1.8, and 2.0 are more like what everyone else is throwing, but they have a different shape and profile that gives the fish a different look instead of the same shape and dimensions of the 1.5 and 2.0. All of them are legit and fish-catchers.”

As Lee has implemented the Evoke line of sqaurebills into his arsenal, he’s found more and more uses for them and caught fish with them everywhere he’s been. This style of crankbaits are a staple for bass anglers, but by going with bigger baits and taking advantage of their unique profile and action, Lee can get more bites from shallow fish.