Just because Team Toyota’s Brandon Lester is only 31 years old, doesn’t mean he’s too inexperienced to remember lures that everybody cast not long ago to catch springtime bass — which then seemed to fall out of fashion. 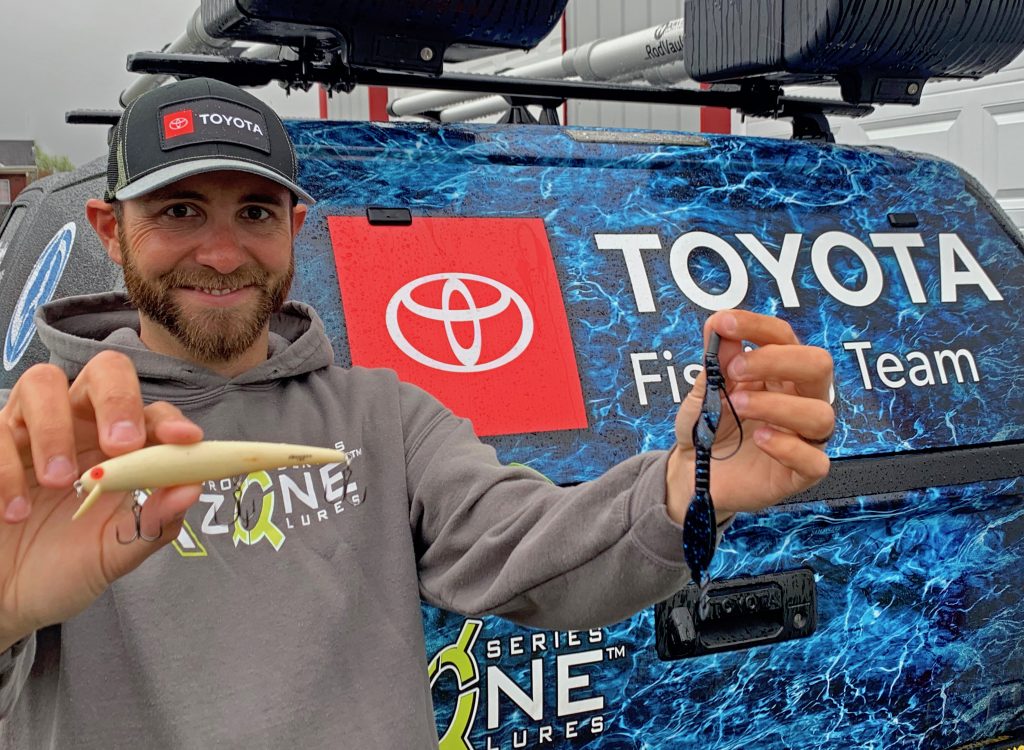 Fact is, Lester has competed in nearly 100 B.A.S.S. events, and already qualified for 5 Bassmaster Classics, including the 2020 Classic in Alabama where he had a very good chance to win going into the final day.

So we asked the country music loving father of two young daughters to choose a couple lures we all should consider digging out of our tackle collection to throw big bass a change-up as springtime bass fishing is in full effect.

“If you love a good topwater bite, this may very well be the first lure you’ll get a topwater bite on this spring,” says Lester. “It’s a ‘wake bait’ intended to be reeled nice and slow across the surface anywhere you’ve got clear water, and bass staging to spawn on grass flats, shallow secondary points, or a series of laydown trees,” he explains.

One trick Lester utilizes with the vintage Bomber Long A is to cast it on spinning tackle, not baitcasting equipment. He spools his spinning reel with 15 pound Vicious braid and no leader, and theorizes a spinning rod and reel allow for critically important long casts in clear water with this lightweight lure.

Once the lure splashes down, Lester holds the rod tip high to pull the braided line off the surface as he reels slowly, being sure not to let the lure dive, but instead to move gently across the surface while leaving an explosive topwater provoking wake behind its narrow body.

While a creature bait might not be as vintage as a Bomber Long A, the popularity of Senkos and beaver-style baits often seems to replace soft plastic lizards and creature baits as a first choice amid spring time fishing these days – but not for Brandon Lester.

“I feel like with so many soft plastic craws and beaver style baits on the market right now, people have forgotten about those big invasive creature style baits like the 6” Muscle Back Hawg Hunter that I reach for a lot this time of year,” says Lester.

Notice how Lester describes the Hawg Hunter as “invasive.” He believes these larger profiled creature lures stir animosity in big protective female bass that are either just about to spawn or already on beds.

“As soon as the water temp gets around 58 degrees, I’m going to tie a 6” Hawg Hunter to 20-pound line with a 5/0 Mustad Grip Pin Max hook and pitch to every shallow flooded bush, laydown, or dock I encounter,” he says. “I don’t know whether they think it’s a bluegill, a lizard, or what, I just know they don’t seem to like it, so they eat it.”

While he may be a fairly young guy, keep in mind Lester has already weighed-in over 3,000 pounds of bass in his pro career. So if you find yourself struggling to catch bass the next few weeks on popular trendy lures – try going retro like Lester, and tie on a Bomber Long A or a 6” creature bait.